NFL Overtime Bets: How to Wager Under the New Rules 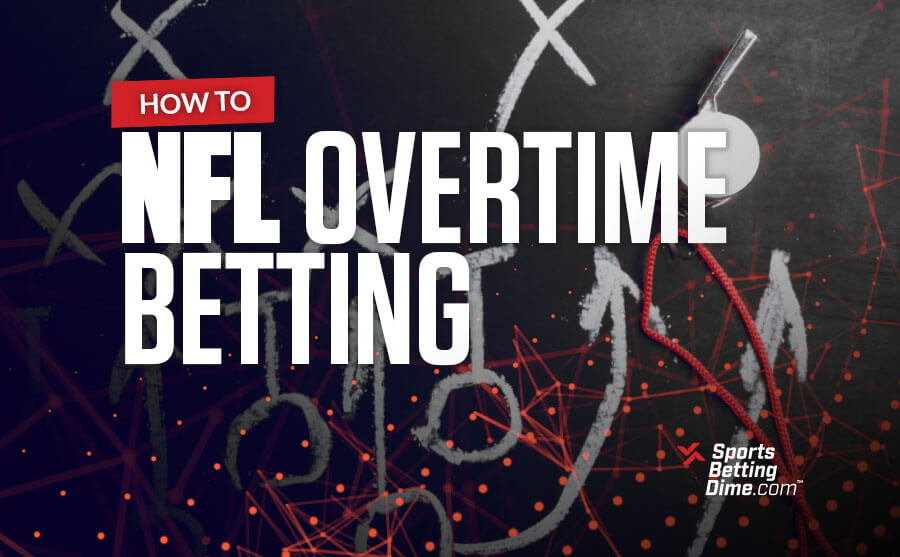 The 2021 AFC Divisional Round between the Buffalo Bills and Kansas City Chiefs will go down as one of the greatest playoff games in NFL history. After an explosive final two minutes that saw the lead change hands three times, these juggernaut teams went to overtime with the Chiefs ultimately winning the pivotal coin toss and eventually the game.

The unexpected turn of events in overtime was crushing for some sports bettors and pure bliss for others, whose wagers were settled off the result of a coin flip that gave the Chiefs possession. This incredible display had important consequences, as the NFL subsequently decided to make critical rule changes to the playoff overtime structure.

With all that in mind, let’s go through how to bet on NFL overtime games and how the rule changes might impact your wagering strategy.

Most online sportsbooks for NFL betting come with a disclaimer in the fine print that reads “all bets include overtime unless otherwise stated.”

It can be difficult to predict whether or not a particular game will go to overtime, but keep in mind that won’t factor into the most popular NFL betting types. You can wager with confidence knowing markets like moneyline, point spreads, player props, and totals include anything that happens in NFL overtime.

You can even make a live bet on a game going to overtime, which is usually listed as something like “end of fourth quarter result is a tie.” Another niche wager is betting on an NFL game ending in a tie, but we’ll discuss that rare possibility later.

For now, let’s dive into how the most popular betting types are affected by NFL games going into overtime. Make sure you check out our NFL odds page when mapping out all your football wagers this year.

Your typical betting strategies will apply for wagering on NFL overtime in 2022. Having said that, overtime does affect NFL betting in some unique ways.

Let’s run through NFL overtime betting types and see how you can plan your wagers for extra action on the gridiron.

When an NFL game is tied at the end of regulation, you might be concerned your point spread wager will be nullified as neither team is ahead or behind. Fortunately, point spread wagers count in overtime so long as the game doesn’t end in a tie.

For example, if you had Chiefs -2 in that Divisional Round game against the Bills, you won your wager because Kansas City ended up winning 42-36 in overtime. 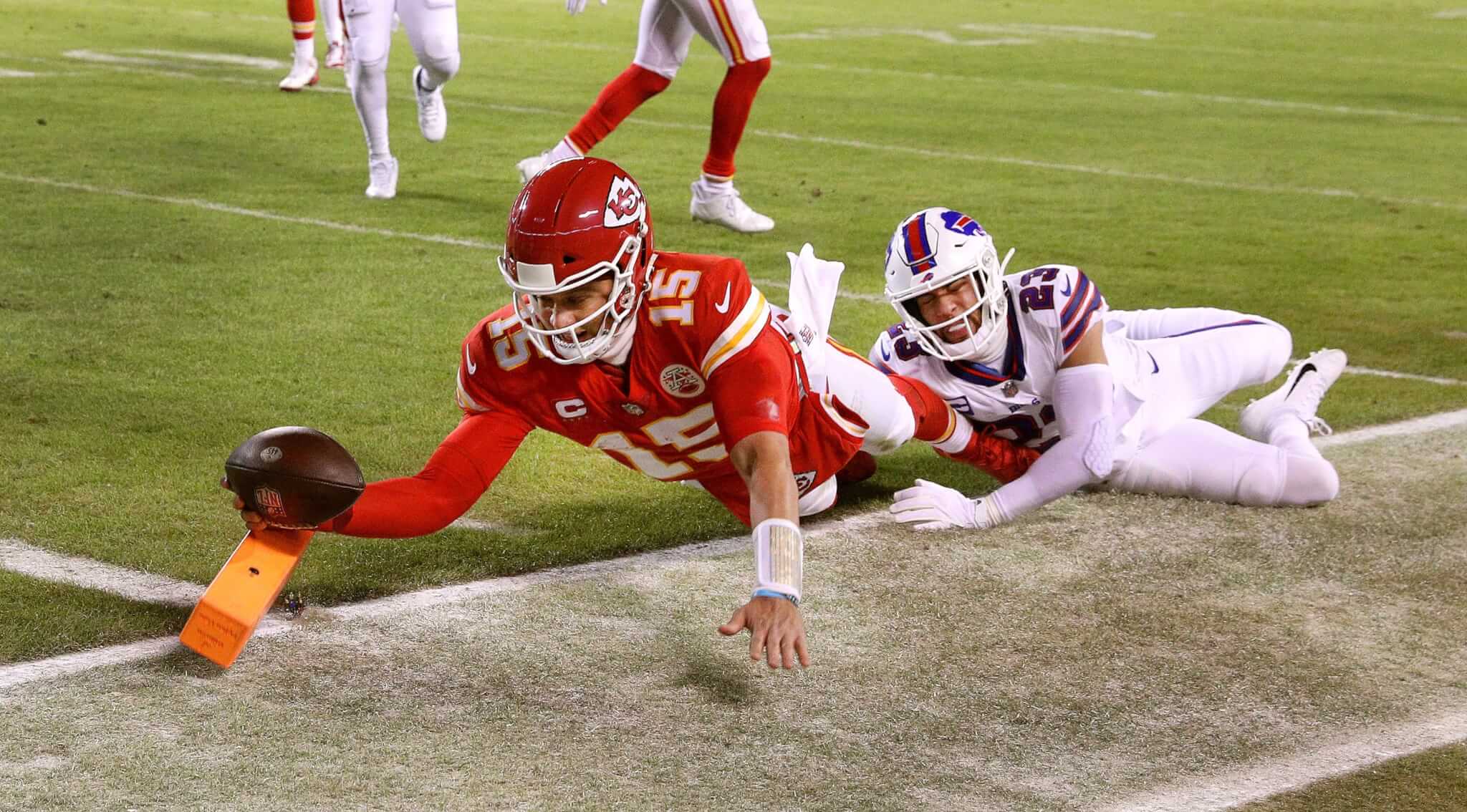 Overtime can make or break your NFL point spread wagers. The team that wins the coin toss will be gunning for a touchdown to secure the victory, and with no extra points needed in a sudden death scenario, a -7 wager on a favored team could be ruined by an overtime touchdown.

Moneyline wagers also count when NFL games go to overtime. This bet will be graded as a loss if the game ends in a tie but, as we’ll discuss later, this outcome is largely uncommon.

If you’re looking for some good bonuses to boost your moneyline wagers this NFL season, make sure you check out these Caesars Sportsbook promos to help pad your bankroll on all the action this year.

NFL games that go to overtime are good news for over bettors, and on the other hand, bad news for under bettors.

More time added in overtime obviously means that the over hitting is more likely, as each team gets an opportunity to tack on more points to the final score. This is especially great if you like betting the over with bonuses like the Barstool Sportsbook promo known as “The Overs Club.”

NFL prop betting covers virtually any outcomes outside of the result of the game, and overtime gives any prop bets you’ve made a little more room to breathe.

Similarly to prop bets, any NFL parlays you make might have more life if the game goes into overtime. We recommend taking advantage of BetMGM promo codes for NFL prop betting and parlays this year, as they offer a huge market for both of these popular wagering types.

While most popular betting types work virtually the same in overtime, there are a few considerations to take into account when factoring in extra time.

Here are some interesting stats surrounding NFL overtime records. These records should give you a better understanding of how frequently your wagers will be decided after the fourth quarter:

As you can tell by these statistics, NFL games ending in a tie are very rare. Because of this, you can usually count on your wagers being settled in overtime, as there is only about one tied game every season on average. However, if a game does end in a tie, some of your wagers may be graded as a loss or push.

You’ll also notice that overtime rules have been altered on a few occasions, and the league is once again making changes to the structure in 2022, specifically for playoff games. This will have an impact on NFL overtime betting through the upcoming season and beyond.

Regular Season vs. Playoff OT Betting in the NFL

Teams that have won the coin flip in overtime have an overall record of 86-67-10, which is equal to a winning percentage of 52.8 percent. That might not seem like much of an advantage until you break the overall record down into regular season and playoff overtime games.

In NFL playoff games specifically, teams that won the coin flip had an overall record of 10-1, with the New Orleans Saints being the only team to lose a playoff game following a coin toss win when they fell to the Los Angeles Rams in 2018.

Thankfully, the NFL has decided to make the following changes to the NFL playoff overtime ruleset starting in 2022.

This offseason, the @NFL overtime rules for the postseason were modified so that each team has the opportunity to possess the ball.

Check out this rule change and others in the official 2022 NFL Rulebook: https://t.co/1mnesUhfg0 pic.twitter.com/ltaGoktjYc

One big thing to consider is the team who has the first possession in the NFL overtime frame might be tempted to go for a two-point conversion if they score a touchdown. This way, they’d prevent the other team from automatically winning if they also score a touchdown and try to win the game with a two-point conversion of their own. This could have a significant impact on your point spread or totals bets on NFL playoff games that go into overtime.

These new rules only apply to NFL playoff games for now, but you can bet more comfortably knowing pivotal games like the Divisional Round example between the Chiefs and Bills will no longer be determined mostly from a coin flip.

Here’s a quick rundown of everything you need to know about NFL overtime betting:

Does overtime count in NFL betting?

Yes, most wagers count in NFL overtime betting. Sportsbooks include an 'all bets include overtime unless otherwise stated' disclaimer in the terms and conditions.

Does overtime count in second half NFL wagers?

Yes, second half NFL wagers include results in overtime.

Can NFL games end in a tie?

Yes, regular season NFL games can end in a tie, however they're a rare occurrence. NFL playoff games that go to overtime cannot end in a tie.

What are the new NFL overtime rules?

The NFL is changing the playoff overtime rules so that each team can possess the ball at least once before a winner is determined.

How long is NFL overtime?

NFL overtime is scheduled for 10 minutes during the regular season and 15 minutes in the playoffs.