The Mother of All Sports Betting Biases: The Overconfidence Bias 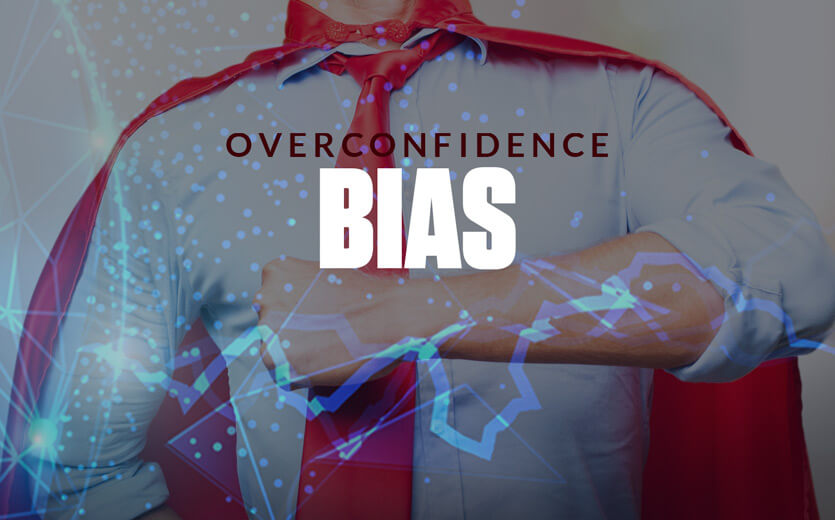 Have you ever spent time with someone who was absolutely certain how to avoid rush hour, only to spend a few hours in gridlock? Or knew someone trying to sell you on a “sure thing” investment, only to have the stock bottom out within a few weeks?

If you have, you’ve witnessed the effects of the ‘overconfidence bias’. Anytime anyone overestimates their ability to judge or predict future outcomes, they fall victim to it. It’s the same bias that’s frequently blamed as a driving force behind the sinking of the Titanic to the mortgage crisis of 2008.

Naturally, the overconfidence bias rears its head when we bet on sports. Learn more about the “mother of all cognitive biases,” and acquire actionable tools and strategies to avoid it!

What Is the Overconfidence Bias?

Regarded by both psychologists and economists as the most prevalent and influential of all cognitive biases, the overconfidence bias refers to anyone who’s excessively convinced in either their reasoning, judgment or cognitive ability.

There are three primary forms of the overconfidence bias:

At this point, you might be thinking that overconfidence bias must be at work nearly everywhere!

Everywhere you look, there’s bound to be people who have a wide gap between what they think they know, and what they really know.

The psychologist who pioneered the entire field of study of cognitive biases, Daniel Kahneman, even said that overconfidence is both the most dangerous and most common of all cognitive biases.

Why Is It Called the “Mother of All Cognitive Biases”? 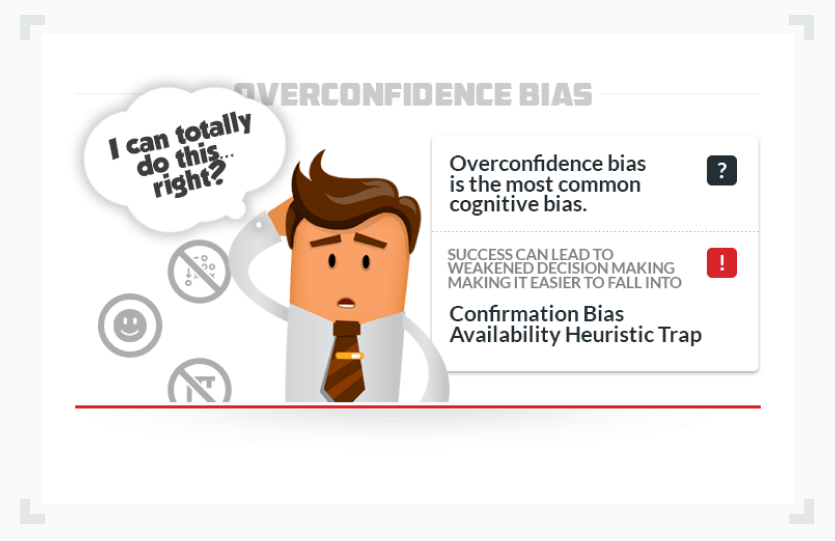 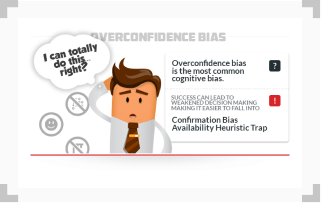 Having too much faith in our ability to predict the future causes us to ignore the fact that we might be susceptible to other biased forms of decision making. The role of overconfidence in the creation of fallacious and biased decision making is supported by decades of research.

Evidence of the Overconfidence Bias Is Overwhelming

The most common way psychologists have studied the overconfidence bias is to simply ask people how confident they are in particular beliefs. From there, they measure their assessments against their peers.

However, this is rarely, if ever, the case.

Psychologists quizzed students and found that people who rated their answers as “99% sure” were wrong upwards of 40% of the time. Despite test subjects expecting their error rate it to be close to 0%, it was still nearly 40%.

Upwards of 50% of business owners believed they ran their businesses more ethically than 90% of their peers. Over 93% of American drivers claimed to be better than average, which is statistically impossible. 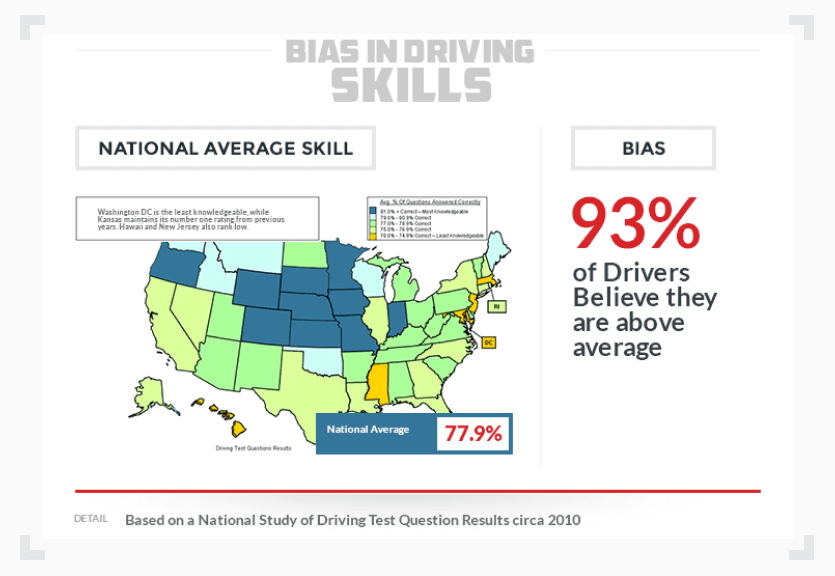 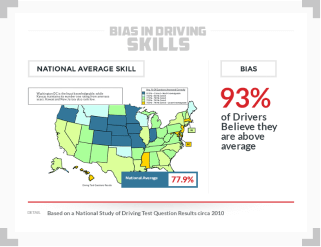 The Overconfidence Bias Is Everywhere!

The overconfidence bias is frequently cited as the most common error that investors make in the stock market. Specifically, overconfidence has been linked to excessive trading, high profile legal disputes, and a high percentage of entrepreneurial failure in the United States.

If that isn’t enough evidence for you, psychologists believe the overconfidence bias played a significant role in the explosion of the space shuttles Columbia and Challenger, the nuclear catastrophe in Chernobyl, and the Deepwater Horizon oil spill in the Gulf of Mexico.

Ask your sports betting friends whether they think they’re above average sports bettors. How many do you think would say yes?

Or, if you took a poll on r/sportsbook, asking if bettors thought they were above-average, what would the results be? We’d be willing to bet that most people consider themselves above average, even when such a fact is clearly impossible.

Not everyone can be above-average. However, recognizing it is the first step to having this knowledge work in your favor. The Overconfidence bias prevents us from fully grasping risk and the possibility of failure in our endeavors.

The Overconfidence Bias and Sports Betting

In our eyes, being honest with yourself as a sports bettor (and the risk you incur with every bet) is a necessary step on the path to being a sharp bettor. When you’re going up against seasoned bookmakers at your sportsbook, overconfidence isn’t a move we’d ever recommend.

Here are some examples of how the overconfidence bias might affect your sports bets:

If you’re overconfident in your abilities as a sports bettor, it’s impossible to correct your mistakes and achieve a higher winning percentage. This bias clouds your ability to act rationally, prevents you from recognizing your failures, and identifying the precise areas you need to improve.

The Overconfidence Bias May Affect Sharps More Than Squares

In his landmark work on risk and probability, The Black Swan: The Impact of the Highly Improbable, Nassim Taleb details how experts suffer from the overconfidence bias more often than ordinary people.

The economists were overconfident, despite the fact their predictions weren’t even discernibly different from a group with almost no knowledge of oil prices. The zookeepers and economists had equal accuracy when it came to foreseeing the future of oil prices, and neither of them had a clue!

Just because someone considers themselves an expert, doesn’t mean they don’t suffer from the overconfidence bias, or that they accurately assess their methods. In the world of sports betting, there’s always room for improvement.

The Solution to the Overconfidence Bias: The Goldilocks Zone

The solution to beating the overconfidence bias in your sports bet is to take the ‘middle way’ or to reach what psychologists call The Goldilocks Zone. Essentially, this means you should do your best to calibrate bets in a zone of confidence where reality and rational beliefs intersect.

Don’t be overconfident, but don’t be paralyzed by doubt, either.

The Goldilocks Zone can be attained when basing bets on all available evidence and information while remaining open to honest self-examination of successes and failures. We recommend recording all your bets, then performing a rational analysis of them.

As a bettor, you have to know and accept the limitations on both your knowledge and bankroll, and understand which bets are worth pursuing. Part of this requires an acceptance that your methods and strategies may, in fact, be flawed.

As a bettor, you should always be open to new evidence and practices and have a willingness to accept that, sometimes, you’ve got to change your mind to be successful.

Getting the Knowledge You Need to Get to the Goldilocks Zone

Thankfully, we’re here to equip you with the knowledge you need to avoid suffering from the overconfidence bias, and help you into the Goldilocks Zone.

Looking to add some new betting tools to your repertoire? We’ve developed a strategy section that touches on betting methods which are integral on your path to becoming a sharp. These can help you learn from – and respond positively to – your failures.

If you’re curious to learn more about the psychology of biases (especially in regards to sports betting) you can take a peek at our comprehensive betting psychology guide.