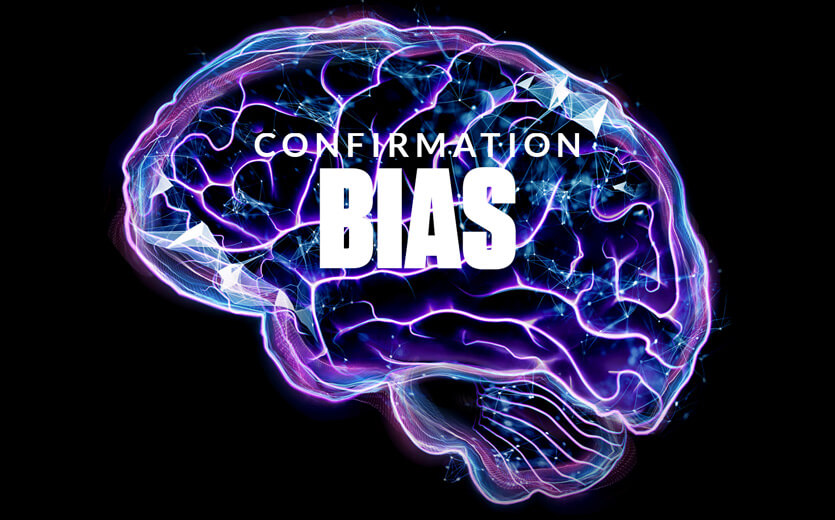 It often feels natural to seek out information or data that supports the outcome that we want (and the outcome we feel is correct). When we do this, however, we fall victim to the “confirmation bias,” also known as the “myside bias”.

In this article, we walk through what the confirmation bias is, why it’s crucial knowledge for all sports bettor, and how to translate this knowledge into a higher sports betting winning percentage.

So, What Exactly Is the Confirmation Bias?

Information that confirms the beliefs or predictions we already have.

As a result, the confirmation bias often causes us to be overconfident in our beliefs, and can even strengthen our beliefs when faced with opposing evidence. This can easily cloud our decision-making process, and make us behave irrationally.

People commonly show this bias when they search for information selectively and in a one-sided way, cherry-picking what they feel is correct.

The confirmation bias also rears its head when we analyze information on a given topic. If two people are given the same information, the way they explain and interpret it is often very different. Our previously-held beliefs factor into how we understand new information.

The Origins of the Confirmation Bias

A series of experiments in the 1960s, especially Wason’s Rule Discovery Test, conclusively proved the effects of the confirmation bias.

Initially, psychologists believed that the confirmation bias only applied to people searching for information that confirmed their existing beliefs. By the 1980s, psychologists established the modern definition of the confirmation bias. This new definition also included people who refused to deviate from their previously held convictions, despite being presented with overwhelming evidence to the contrary.

How Does the Confirmation Bias Affect Us?

We’re all human, and it’s in our nature to look for familiar patterns in events and use them to make predictions about the future. The confirmation bias makes us more stubborn and resistant to change.

Think back to Tim Tebow’s incredible year.  All of a sudden, his otherworldly performance became the norm to many people, especially because so many people were rooting for him. It was such a great story that no one wanted to see him fail.

However, there was overwhelming evidence that Tebow was unlikely to repeat his success. When he faltered time and time again, fans and managers continued giving him chance after chance. They were guilty of the confirmation bias, as didn’t want to see Tebow’s fluke season as an outlier. They saw the QB as a success story and refused to change their beliefs.

Examples and Real Life Studies of the Confirmation Bias

There are a ton of examples of the confirmation bias that have been observed and verified by psychological studies and experiments. A study by Park et al., 2010 revealed that when investors are researching information about a stock they’re interested in, they only looked for information that confirmed their existing beliefs and opinions about the stock. It was very difficult to change these investors initial opinions, even in the face of overwhelming contradictory evidence.

Further, Park et. al. found the investors who exhibited the highest degree of confirmation of bias ended up making the least money.

Here are some classic examples of the confirmation bias:

In most cases, there are nearly equal numbers of trends and facts that point to two sides of an issue or a problem. We’re just naturally likely to gravitate towards information that confirms our preconceptions.

The Confirmation Bias and Sports Betting

When it comes to betting on sports, it’s all too common to get stuck in our ways. Bettors get into habits of using a particular strategy too often, or not enough. Our natural tendency is to gravitate towards using a limited number of techniques and strategies in our bets, instead of using as many tools and resources as possible.

This happens most often after a string of successful bets. We often decide against reviewing the strategies that worked during a past winning spell, even if they’ve since stopped working.

Despite the fact that we might have gotten lucky during a winning spree, we often search for (and interpret) information that supports our using the same flawed strategies over and over again.

The same thing can be said about a long losing streak, where we quickly label any strategy or method of analysis we once used as cursed. Swearing them off is probably the worst strategy we could have.

How to Outsmart the Confirmation Bias

The best tool to beat the confirmation bias is for bettors to become their own biggest critics in their sports bets. Win or lose, bettors should always play the part of the contrarian and examine new information with an open mind.

Becoming deeply=entrenched in one particular strategy or method of analysis is never productive in sports betting. All the best “sharps” know that to stay on top, it’s necessary to be honest about what’s working and what’s not.

Staying fluid, and do away with your sympathies and prejudices as best as you can.

In our guide to 10 Simple Strategies to Improve as a Sports Bettor, we recommended that you talk to your friends about your sports bet, join sportsbook-related subreddits, and peruse online forums as much as you can. If we engage with our peers and are motivated to think critically of ourselves, we’re proven to be significantly less prone to the confirmation bias.

Questions to Ask Yourself About Sports Betting

There are three simple questions that sports bettors should ask themselves to avoid the confirmation bias:

Asking these questions, and listening to your answers goes a long way to avoid the pitfalls of the confirmation bias.

With betting psychology, we hope to equip our readers with all the tools they need to improve their betting strategies. Get out there and start betting like a sharp!