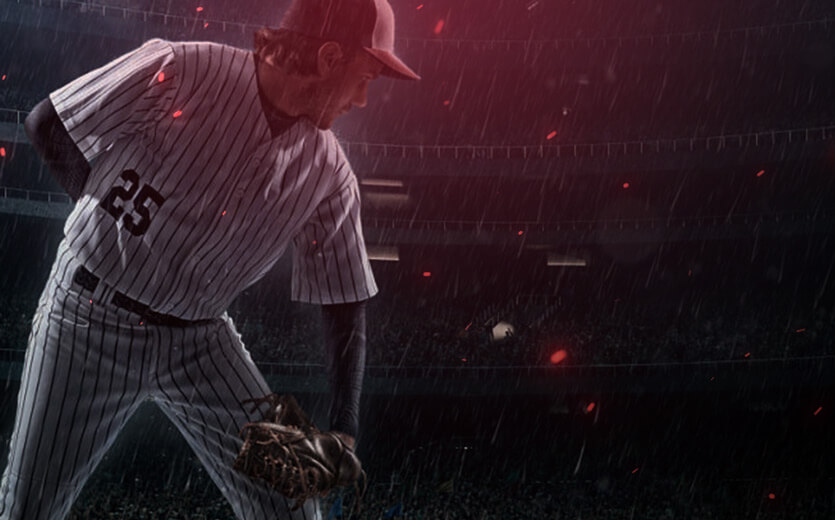 Totals betting, commonly known as over/under, is a popular option for sports bettors who prefer to wager on football and basketball, but it’s a lesser-known option when betting on baseball as well. As such, sportsbooks generally protect themselves much less on totals bets than they do on the moneyline or the run line, making it an excellent value for discerning bettors.

If you’re familiar with betting the over/under in football, the concept behind baseball totals betting is the same. You simply wager on the number of runs scored by both teams combined.

Read on for a detailed explanation of how totals betting works in MLB baseball, accompanied by some helpful examples.

Successful MLB totals betting starts with a fundamental understanding of the most probable outcomes based on past results. The following chart shows how often certain totals occur in baseball, based on hundreds of thousands of games of data.

Frequency of Total Runs Scored Per Game in MLB Baseball

Just as there are key numbers in numbers in football (i.e. totals that occur more frequently than others) there are also more common totals in baseball. As you can see from the chart, the odd numbers have higher frequencies because games cannot end in a tie.

Pushes, or Ties: “Shading” the Juice

While the final score can’t end up tied, over/under bets can end in a “push.” When the total number of runs scored in the game equals the total set by the sportsbook, it results in a push.

Sportsbooks do not want games to push, because they have to refund all bets in such cases, including the juice. So, by setting the total on the more common outcomes, they are taking a greater risk that there will be more pushes.

Books often “shade” the run total up or down, and adjust the payouts on either side.

Instead, sportsbooks will often“shade” the total up or down, and adjust the payouts on either side.

By “shading” we mean adjusting the vig to -125 or more on the more likely outcome. (The less likely outcome is correspondingly adjusted in the other direction.) The adjusted payout still encourages action on both sides.

How Does this Work in Practice?

Say, for example, the Cubs were facing the Dodgers, and both teams had their aces on the mound. The sportsbook was originally going to set the total at 7 (the most common outcome), with the over and under both at -110.

In order to reduce the likelihood of a push, the book decides to shade the total down to 6, and make the under +105 and the over -125. Some bettors will think the lower payout on the over still holds value because not many games finish with fewer than 6 runs scored.

However, other bettors will think the under is worth betting on because you don’t have to risk as much to get the same return and both teams have good pitchers scheduled to start, which should keep the score low.

Bettors may end up wagering the same amount of money on the aggregate, but the sportsbook has a much lower risk of a push (because only 7.2% of games end with exactly 6 runs scored, whereas 11.3% end with 7 runs scored).

Getting the Best Number on Baseball Totals

Looking at the chart from above, we know that 7 and 9 are the two most common totals. Since a game cannot end in a tie, games that are tied at 3-3 or 4-4 through nine innings will always end with (at least) one more run. That means the difference between betting 7 and betting 7.5 is massive. The same can be said for 9 and 9.5.

10.3% of games end with 9 runs scored. Let’s assume the Red Sox and Yankees, two of the highest scoring teams in the league, are playing each other and you want to bet the over. Would it be better to bet the over on a total set at 9 or 9.5?

If you take the over at 9.5, you significantly decrease the likelihood of winning your bet. With .5 added to the total, the teams need to score a combined total of ten runs for you to win the bet. If the game ends with 9 runs, you get nothing.

In contrast, your money would be returned if the total were set at 9 and the game finished accordingly, which again, happens over 10% of the time.

The reverse is true if we want to bet under the total number of runs. Since landing on 9 is a very likely outcome, betting under 9.5 is a much better bet than under 9 runs. 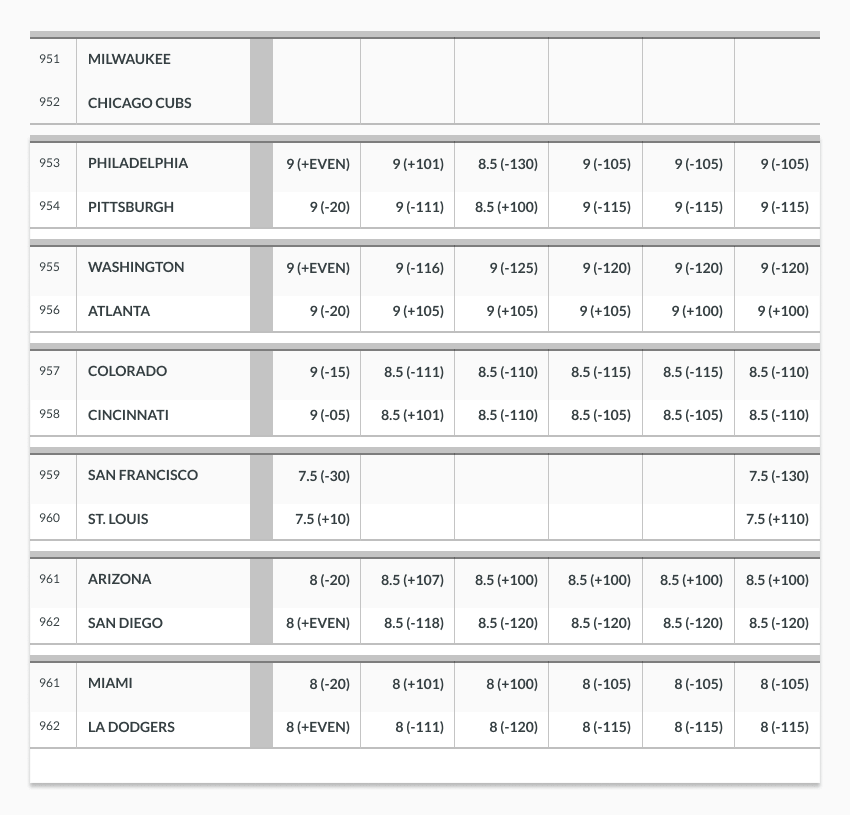 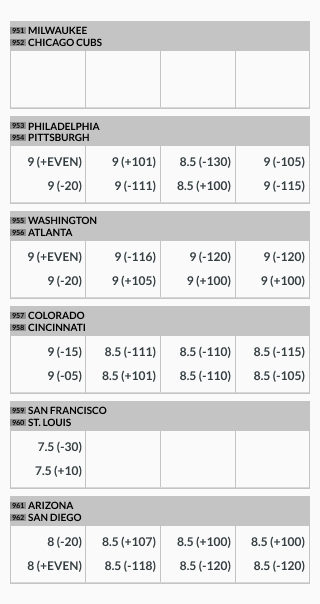 Totals aren’t shown for the first game listed, because Wrigley Field, home to the Chicago Cubs, is a notoriously windy ballpark. As such, all five sportsbooks are inclined to wait until the last possible moment so that they can better account for sudden changes in wind direction that might affect then umber of runs scored.

The next game on the rotation is the Phillies and the Pirates. You will note that four of the five sportsbooks have a total of 9, while Book B is still dealing an 8.5. If you think that these teams will score more than eight runs, then you might think that 8.5 option is looking pretty good.

If you think the game will be lower scoring, betting “under” 9 runs at Book A is a safer option, since your bet will be a push if the game ends 5-4. You will pay for that safety net in the form of a higher vig; in that case -110, whereas if you wanted to wager under 8.5, Book B has the vig at +110. That line presents a riskier option with a higher potential reward if you wanted to bet on the under.

Sharp bettors spend a great deal of time comparing the offerings at baseball betting sites to find the highest-value lines. If you want to learn the ins and outs of this essential strategy, explore our guide on how to shop for the best lines.

How Is the MLB Total Formulated?

You might wonder why there is such a difference in the O/U from game-to-game.  While odds are always formulated on a case-by-case basis, bookmakers generally consider the following factors when setting the total for an MLB game:

Bettors can get a leg up on books by looking at the umpire. Sportsbooks don’t usually consider who’s behind the plate, but sophisticated bettors know that certain umpires have particular tendencies. For instance, some tend to have bigger strike zones, theoretically leading to easier outs and lower scoring games.

Almost all of those variables are factored into the number to some extent, but they won’t all be equally important for each game. The best over/under bettors are the ones who can figure out which ones carry the most weight in a given game.

There are a couple of additional totals bets that can provide value to bettors willing to step outside the box, if you will.

Bookmakers offer the option of betting on how many runs will be scored in just the first five innings, which can be advantageous for two reasons:

Anytime you can turn a variable (not batting in the bottom of the ninth inning) into a constant (guaranteed 15 outs) you have increased your advantage.

You also have the option to bet on the number of runs scored by either team, as opposed to wagering on the combined total. This is commonly referred to as the “team total.”

You also have the option to bet on the number of runs scored by either team, as opposed to wagering on the combined total. This is commonly referred to as the “team total.” It’s otherwise identical to betting the game total: you can bet over the posted number or under.

Here’s the thing about team totals: the number the books use is simply a derivative of the total for the game, broken down by who is expected to win. But in reality, team totals are not always perfectly correlated to the game totals. And that creates an opportunity where the sportsbook has relied on an overly simple calculation.

Books will be quick to move the entire game total when there is one-sided action they need to balance, but they’re not as quick to adjust the team totals up and down. Take advantage of their sluggishness whenever possible.

As mentioned earlier, whenever you can eliminate a variable you will gain an edge. The players, weather, and umpires are human, hence less predictable on any given day. Stadium dimensions, however, do not change during the course of a season.

Here are the top five and bottom five parks by home runs in 2016, but this is one statistic that rarely changes much from year to year. There’s a reason pitchers don’t want to sign with the Rockies but would jump at an opportunity to play in the Bay Area.

*No longer in use

Searching for more answers to pressing baseball betting questions? We’ve got your back!  We answer (hopefully) every query you can conjure in our guides on how to bet on sports.