NWSL Challenge Cup Betting: Your Guide to Get Started 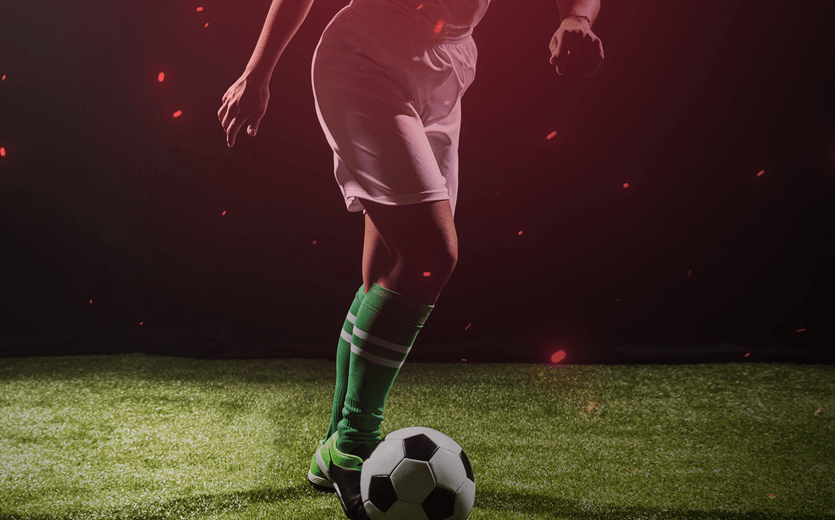 The 2020 NWSL Challenge Cup was significant for the league’s business operations for a multitude of reasons.

Most importantly for sports bettors, the tournament marked the first time in National Women’s Soccer League history where you could place a bet on individual games.

Aptly named, the inaugural NWSL Challenge Cup was a response to the challenges of the COVID-19 pandemic. In March 2020, Commissioner Lisa Baird experienced a proper trial by fire. As the pandemic shutdown the global sports industry, Baird had to suspend the NWSL season on just day two in her new role.

Fast forward to June, and the NWSL was the first North American team sports league to return to play. It did so via the Challenge Cup tournament, held entirely in a Salt Lake City “bubble.” Baird and her team brought on new sponsors in the middle of a global pandemic to ensure players’ health and wellness as well as protect their compensation and insurance throughout the tournament and the rest of 2020.

There were no positive COVID tests during the tournament itself, although the Orlando Pride had to withdraw before entering the bubble. Importantly, matches broke several league TV viewership records, and revenue from sponsorships and merchandise sales kept individual teams afloat. An average of 653,000 viewers tuned in on CBS to watch the Houston Dash take down the Chicago Red Stars in the final.

Many assumed the Challenge Cup was a one-off for 2020, but soccer fans were delighted when the league announced a 2021 tournament ahead of the NWSL regular season.

The 2021 NWSL Challenge Cup will feature 21 games between April 9 and May 8. Unlike the inaugural tournament, the teams will play in their home markets this year. The structure will look a little bit different with the addition of a tenth team, Racing Louisville FC – the latest NWSL expansion franchise.

Here’s the format for this year’s tournament:

The most popular bet types available for the Challenge Cup are totals, three-way moneyline bets on individual games, and futures bets on the tournament champion. You may also find spreads, draw no bet, double chance, props, and more – these are all outlined in detail in our soccer betting 101 guide.

For now, let’s go over the moneyline, totals, and futures bets, as these are the simplest wager types for NWSL fans to get started with.

Moneyline wagers look a little different in soccer than they do in most other sports because they allow you to select a draw as the outcome.

With an NWSL three-way moneyline bet, you’re predicting what you think will happen out of three possible results: Team A wins, Team B wins, or the match ends in a tie. These wagers are settled after regular time, meaning at the end of 90 minutes of play plus any added injury/stoppage time.

Here’s an example of what three-way NWSL moneyline odds would look like: 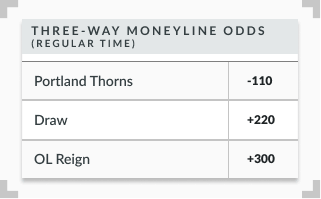 In the above example, a successful $100 bet would give you a profit of:

Essentially, you stand to win more money by betting on outcomes the sportsbook thinks are less likely to happen and are therefore riskier.

Of course, you don’t have to wager $100! You can risk more or less money and calculate your payout accordingly. Visit our Betting 101 section for a complete overview of how to read and calculate sports odds. Or, if you want us to do the math for you, check out the SBD Odds Converter.

With totals betting, you simply predict whether or not the total number of goals scored between both teams in the match will be over or under the figure provided by your sportsbook. Total goals markets will often use half points to eliminate the possibility of a “push.”

The most common over/under total for most matches will be over/under 2.5 goals. However, soccer matches often have a range of totals you can choose from, whereas NFL and NBA totals are typically set at a fixed point. Here’s a hypothetical example of betting options you might see: 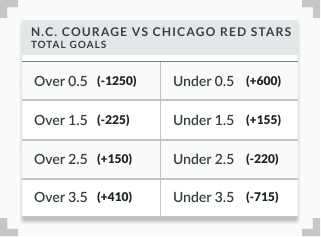 You may also find over/under wagers available for total corner kicks and other soccer statistics – these are what’s referred to as game props. If you see totals displayed for a single team or player, these are known as team props and player props. There are all kinds of different props available in soccer. Other popular examples include “both teams to score” and “first, last, and anytime goal scorer.”

The most widely available Challenge Cup futures bet is on the overall winner. You can bet on which team you think will win the championship long before the tournament starts.

Here’s a snapshot of how sportsbooks will display NWSL Challenge Cup futures odds: 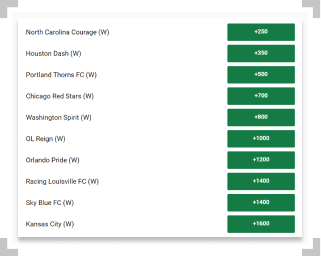 We took the above screenshot from Unibet Sportsbook on March 23, 2021. Lines change regularly, so the odds shown above are for sample purposes only.

Looking at the screenshot above, you can see that the NC Courage are the Challenge Cup favorites, while Kansas City has the longest odds of winning the tournament. North Carolina’s +250 odds represent an implied probability of 28.57 percent, while Kansas City’s odds imply a probably of 5.88 percent.

Check out our guide to futures bets for an in-depth explanation of this type of wagering.

Looking ahead to the 2021 Challenge Cup, here are some storylines to follow and be aware of when placing your wagers.

The defending champions, Houston Dash, were the underdogs when they lifted the Challenge Cup trophy in 2020. The Dash return in 2021 with a remarkably similar lineup, fielding 21 of 24 of the players who were on last year’s winning roster. All their star players are back, including captain and Challenge Cup MVP Rachel Daly and other international stars Sophie Schmidt, Nichelle Prince, and Allysha Chapman, plus American standouts Jane Campbell, Shea Groom, and Kristie Mewis.

The unexpected Challenge Cup title was a big deal for the Dash franchise, who had never been to the NWSL playoffs since joining the league in 2015. With the core group staying in orange, there’s no doubt they’ll want to keep the trophy in Houston for another epic celebration.

Thanks for making it a special one, @budweiserusa! 🍻#NWSLChallengeCup pic.twitter.com/kp294IpKht

The start of the Challenge Cup tournament overlaps with a FIFA international window, meaning most teams will be without players representing their national squads for their first game or two.

Notably, the United States, Canada, England, and France all have two matches during this window, which runs from April 5 to April 13, 2021. There are four Challenge Cup matches in that time, plus four more in the following three days when national team athletes will likely travel or sit out for recovery purposes. The majority of NWSL teams play two games that are likely to be affected, while the Courage, Reign, Sky Blue, and Kansas City have just one.

With the Tokyo 2021 Olympics coming up this summer, NWSL teams will have to get used to playing without some of their biggest names.

The NWSL will be welcoming two new franchises this year – the expansion side, Racing Louisville, and Kansas City, which relocated from Utah.

Both will likely be considered underdogs in most of their matches, but players will be looking to impress their new staff and fans. Expect extra motivation, scrappiness, and possibly some upsets.

Also of note, several recent NWSL draftees will remain with their college teams for another month or two as the NCAA season is still wrapping up. This affects all the squads in the Challenge Cup, but in theory, it hurts Racing Louisville and Kansas City the most as they made the most selections in the 2021 NWSL Draft.

Last but certainly not least, we’ll be watching to see if teams can find the back of the net more often this year.

The 2020 Challenge Cup featured just 36 goals – an average of 1.57 per match – and featured an 18-match streak in which the total went under 2.5 goals. In 18 of 23 games, at least one side was held scoreless. Three of four quarterfinal games were decided on penalty kicks after teams went nil-nil during regular time.

The under was a lock last year. Let’s see if players can break that trend in 2021.

Where to Find NWSL Betting Information

The NWSL is still relatively new to the sports betting space, so you’re going to have to dig a little deeper to find reliable information.

Women’s soccer is likely considered a “niche” betting market, which means sportsbooks may be slightly slower to adjust betting lines. To find an edge, we recommend keeping up with the latest NWSL news at the following sites:

Women’s soccer has a strong social media presence, particularly on Twitter. Here are some NWSL insiders worth a follow:

These accounts are held by sports journalists who cover women’s soccer extensively and provide valuable insights you can use to inform your wagers. Several also have dedicated NWSL newsletters and podcasts you can subscribe to.

Wondering where to bet on the NWSL Challenge Cup? Look no further. Our reviewers have spent countless hours evaluating the best legal online sports betting sites. Here are our top four recommended sportsbooks for betting on women’s soccer.

We’ll update this list as other top sportsbooks continue to expand their NWSL offerings.

Your Source for Soccer Betting

Now that you have a sense of what the NWSL Challenge Cup is all about, it’s time to take a look at the odds and get ready to place your wagers.

Sports Betting Dime is here to help you bet with confidence every single time. To learn more about betting on the NWSL and soccer in general, check out our How to Bet on Sports section.