The Biggest and Most Popular NASCAR Tracks for Betting 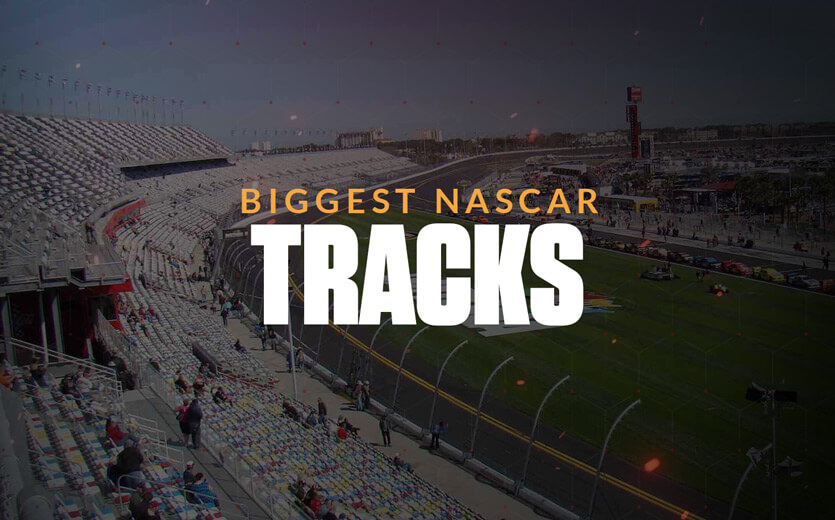 Although many people think that NASCAR tracks are all the same, that couldn’t be further from the truth. Yes, the drivers generally race ovals and mostly just turn left, but there are many subtleties to each track that resist that common oversimplification.

So what are the biggest races of the year and what should you know about betting those tracks? Let’s take a closer at the most important races Monster Energy NASCAR Cup Series and learn about their individual nuances.

What Is NASCAR’s Grand Slam?

There is no better place to start this list than with NASCAR’s Grand Slam, which is comprised of four of the most prestigious races on the schedule.

The Grand Slam is made up of the Daytona 500 (Daytona International Speedway), the GEICO 500 (Talladega Superspeedway), the Coca-Cola 600 (Charlotte Motor Speedway), and the Bojangles’ Southern 500 (Darlington Raceway).

It’s no secret that the biggest races of the season take place on the best tracks, but these are also the toughest to conquer. No driver has ever won all four in a season in the history of NASCAR.

Let’s take a closer look at the details of the four races that make up the annual NASCAR Grand Slam.

The Biggest Race of the Year: Daytona 500

One of the most unique aspects of the Monster Energy NASCAR Cup Series schedule is that the biggest race (based on the prize purse and attendance) of the season is the first one.

Widely known as the “Super Bowl of Stock Car Racing” or “The Great American Race”, the Daytona 500 is regarded as the most important and prestigious races on the NASCAR calendar. The race is held in mid-to-late February every season and possess the largest purse of any NASCAR race, by a significant amount.

The Key to Betting Daytona 500

This race used to be a restrictor-plate track, which is a tool that NASCAR used to cure horsepower. However, rules changes have been implemented and the 2019 Daytona 500 was the last year under those former rules.

Typically, the Daytona 500 is about pack racing and the key for drivers is to stay near the front to avoid a crash. That’s because a crash in the middle can have huge ramifications for everyone from the middle to the back, as we saw in 2019 with an 18-car crash near the end of the race.

The ability to get to the front and stay out of trouble is key to winning the Daytona 500, although NASCAR is hoping that the rule tweaks will change that going forward. Being that it is the first race of the regular season, it can be tough to handicap because it’s the first look at participating drivers.

Known as “The Big One”, Talladega has the record for the fastest recorded time by a NASCAR driver.

Since it’s so unique, take a look at driver averages for this track. Certain drivers perform well here while others struggle. A site like DriverAverages.com can give you a clear picture.

The Charlotte Motor Speedway is a 1.5-mile oval. This track is used to host multiple races every single year, including the NASCAR All-Star Race.

One of the most unique aspects of the Coca-Cola 600 at Charlotte is the fact that it starts during daylight and ends under the bright lights that surround the track after nightfall.

The Coca-Cola 600 is a very difficult race to run with 13 different winners over the last 13 years. At 600 miles long, the Coca-Cola 600 is the longest race on the Monster Energy NASCAR Cup Series schedule. The sheer length of the race means that endurance is important.

Referred to as “The Lady In Black” or “The Track Too Tough to Tame”, Darlington Raceway is one of the most unique tracks on the Monster Energy NASCAR Cup Series schedule because of its famous egg-shaped design.

An oval with ends that look very different with a narrow curve at one side and a much wider curve at the other end, the Darlington Raceway is one of the most challenging for crews across the sport. They have to deal with the issues that come with the tuning cars to handle such an original track, a track that’s getting worn out and possesses less downforce than ever before. This track is known to tear race cars to pieces, so drivers and their teams have to be on-point.

The track makes it very challenging for the crews to set up their cars’ handling. The cars need to be effective at both ends despite the differences in the shape of the track.

That puts an even greater emphasis on the work done in the pits. The quality of the pit crew is integral to a driver’s (and his car’s) success on this track.

Most Popular Races Outside of the Grand Slam

Outside of the Grand Slam, there are a number of other key races on the schedule that bettors should look forward to. We’ve compiled what you should know about the biggest remaining races.

Shortly after the hype of the Daytona 500 settles, the Monster Energy NASCAR Cup Series heads to California for the Auto Club 400. The Auto Club Speedway in Fontana. It’s the final stop on the west coast before heading back east.

The Bass Pro Shops NRA Night Race is the second race on the Monster Energy NASCAR Cup Series that takes place at Bristol Motor Speedway. Unlike the first stop at Bristol, this race is unique because the entire event takes place at night. The unique race time makes the Bristol Night Race one of the most fun to watch every season.

Big Machine Vodka 400 at the Brickyard

The final stop of the Monster Energy NASCAR Cup Series regular season is at Indianapolis Motor Speedway, with the Big Machine Vodka 400. Some drivers need points here while other drivers have already locked up their playoff spot and might not be as motivated to push for a win.

NASCAR tracks come in all shapes and sizes. Let’s take a closer look at the main types of races and tracks that drivers and their pit crews have to deal with.

The most common type of track on the Monster Energy NASCAR Cup Series is the oval.

However, it’s important to understand that there are minor differences between the oval tracks. Some are shorter (less than a mile) and some are longer (Superspeedways are two miles). Some are stadium ovals, some are triangle ovals and some are unique shapes.

Different types of oval tracks privilege certain aspects of racing, such as handling, speed, and tire maintenance, so you have to factor all sorts of things based on the type of oval. With CT online sports betting live and accepting bettors, NASCAR fans headed to the Stafford Oval raceway will be able to bet on their favorite driver very soon.

The key to betting oval tracks is to be able to understand the minor differences of each track. Whether it has to do with speed, distance or any other factor, it’s important to note the differences.

There is a much smaller number of road courses than there are ovals. The list includes Charlotte Motor Speedway, Sonoma Raceway, and Watkins Glen International.

Road courses are much different than oval courses since drivers deal with many more key factors than they normally would if they were just turning in one direction.

There is a unique group of drivers that tend to excel at these road courses, who are referred to as “road course ringers.” Those drivers are often good bets at these events, even if they struggle everywhere else.

Only a select few tracks host multiple races every year. That list includes:

The key to betting on races that take place at these tracks is to make sure you read and review all of the information you can find on the first race at that track before betting on the second.

There tends to be a pattern, so you want to bet on the drivers that did well at the track (that year and previously), and avoid those who struggled. It’s one of the few times in the season that you get that type of repetitive evidence, so rely on it.

Betting on NASCAR is about paying attention to the driving details. By understanding the different tracks and what it takes to win on them, you’ll be a step ahead of the competition.

For more NASCAR strategy articles, check out our how-to section.