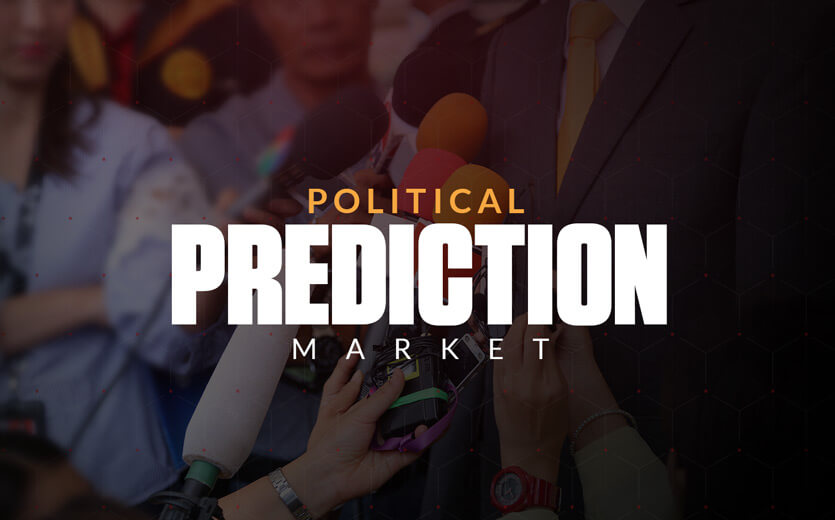 Political prediction markets have been around for well over a century, but they’ve increasingly caught the attention of casual observers and mainstream media in recent years.

Proponents of these futures trading markets argue that they are more effective than traditional methods of predicting election outcomes, such as opinion polls. Many political scientists and economists agree, but their accuracy has been called into doubt after several recent misfires.

Let’s take a close look at exactly how these futures markets operate and whether they have value as you refine your strategy for how to bet on politics.

What Are Political Prediction Markets?

Political prediction markets are exchanges where the public can buy and sell shares tied to the outcome of an election or other political event. They are generally real money markets, with the price of shares determined by demand.

The validity of political prediction markets is based on the efficient market hypothesis. The idea is that open markets are more predictive of future events than expert opinion because they aggregate and properly weigh all relevant information available to all people.

In theory, the market considers disparate information in a way no individual or small group would ever be capable of.

Think of it this way – even a Harvard-educated political scientist only has so many hours in a day. They listen to certain radio shows and read a certain newspaper. Their own political leanings and daily experiences cloud their perception of objective reality.

There is no way they can consume and effectively organize all the public information relevant to the question of whether Donald Trump will win the 2020 Presidential Election.

But what if you could somehow merge their information and experiences with those of everyone else with an interest predicting the outcome?

The consensus efforts of hundreds of thousands of people relying on different information from separate sources would surely be more accurate than the whims of a single individual, right?

Because bettors are incentivized to do everything in their power to purchase the right shares at the right price, prediction markets should theoretically produce consensus opinions inclusive of all available information. People have money on the line, so the market expects them to act rationally and only purchase the shares they value.

Who knew Adam Smith’s invisible hand could reach its way deep into the pockets of your sportsbook?

How Do Political Prediction Markets Work?

The market opens well in advance of the election and closes just before the outcome is settled. Shares are traded on a scale of 0 – 100, usually correlating to prices of $0.00 – $1.00.

While the market is open, traders exchange shares among themselves. As with the stock market, everyone wants to buy low and sell high when trading. Holding the right shares when the election happens and the market closes guarantees a profit.

Shares go up in value as they become more desirable, which indicates public confidence in the associated political outcome has increased.

Because bettors can cut losses by selling shares they’ve lost confidence in, the price of less desirable shares will be driven down by the laws of supply and demand. Decreased share value indicates that public confidence in the associated outcome has decreased.

How Do Prediction Markets Help Us Make Predictions?

If we assume that prediction markets work exactly as intended, the price of each share should correlate precisely with the probability that outcome will occur.

For example, if shares that say Elon Musk will win the 2032 Presidential Election are trading at $0.74 (with correct predictions paying $1.00), the market is suggesting that he currently has a 74% chance of winning the election.

The simplicity of this metric makes it an extremely attractive way to quickly predict election outcomes.

But is it truly wise to trust abstract economic theory with your hard-earned bankroll? Should you put your faith in the so-called ‘wisdom of crowds’?

How Accurate Are Political Prediction Markets?

But in 2016, they missed the mark, bigly, on two very significant events: Brexit and the election of Donald Trump. With these massive missteps in mind, it’s worth asking a few hard questions before you rely on a political prediction market to inform your betting strategy.

Why They Got It Wrong

For political prediction markets to live up to their promise, they need to meet a few conditions. The entire premise requires the market to consider information from diverse but highly informed sources.

If the profile of those trading within the market do not meet this profile, it’s worth taking conclusions with a grain of salt.

Make sure there is a deep base of investors

The efficient market hypothesis was developed based on the observation of traditional equity and commodity markets, which enjoy widespread public participation and represent a significant portion of the global economy.

To work as expected, a market requires depth in terms of both the number of investors participating and the value of the investments they’ve tied to the market.

Political prediction markets with only a few thousand participants can be swayed to suggest an inaccurate result by only a handful of individuals acting irrationally. The self-correcting mechanism of free markets only works when well-informed and highly rational actors significantly outnumber other participants.

Remember that most participants are hobbyists, not investors

These issues are exacerbated by the fact that most prediction market participants are primarily motivated by fun, not money.

People are risk averse when their life savings are on the line. When they’re trying to beat a few other journalists or lawyers for bragging rights and a few bucks? Not so much.

Due to the small profile of today’s political prediction markets, most of the participants also fit a certain mold. They’re likely to be highly engaged in the political scene or even working in it.

This can create a feedback loop wherein prediction markets simply become an echo chamber of elite opinion. You know – an amplifier for the opinions of people who would have told you that the European project was infallible, and that Donald Trump could never win an election back in 2016.

While they were wrong about some of the more surprising geo-political events of recent years, political elites are typically significantly more informed than the general public. As such, it does make sense to use prediction markets when handicapping political props and futures.

Just approach the info the same way you would sports handicapping advice from a major media outlet like ESPN or CBS Sports. Comparing the suggestions of the prediction market to a poll aggregator like FiveThirtyEight provides another data point for additional context.

Using the information from political prediction markets to inform your wagers is very straightforward.

Everything You Need to Bet on Politics

Keep an eye on how the odds are changing in the most important races at our politics betting hub.  You’ll also find the latest political betting news and our favorite online sportsbooks for betting on politics.

Whether you follow the sage advice of the political prediction markets or rely on your own intuition, please remember to gamble responsibly, and enjoy the action out there.