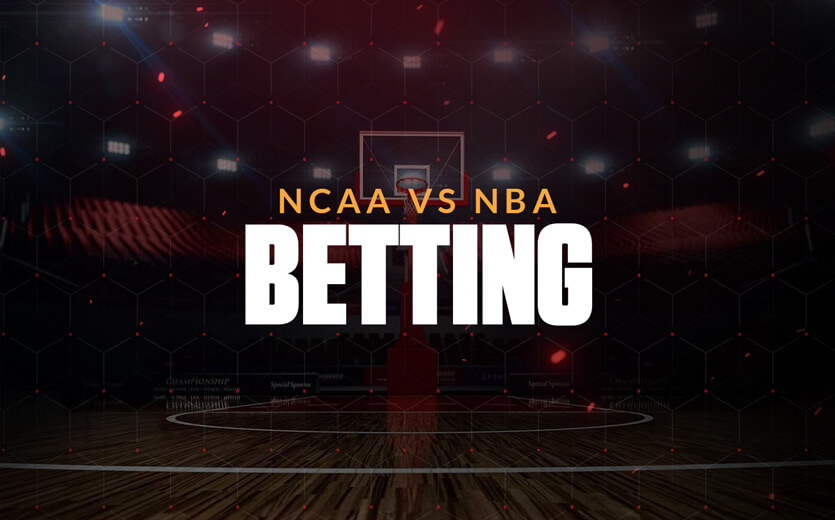 Most sportsbooks treat the NBA and NCAA Division I basketball like two sides of the same coin. They allow bettors to wager on spreads, moneylines, and totals in both sports, and offer the same tantalizing prop bets and alternative lines at both levels of competition. College basketball vs. NBA betting lines look so much alike that many first-time bettors employ the exact same strategies for both.

This is an easy trap to fall into, but you can get burned every time if you don’t know how to account for the differences between college ball and the NBA. Although NBA games and NCAA basketball games look the same on a betting slip, they’re very different games complete with different rules, different business models and, more often than not, very different outcomes.

Before you make your next wager, take a moment to brush up on the key differences between betting on college basketball and the NBA with our helpful primer, which covers seven of the most important discrepancies:

1. College Basketball is Lower Scoring than the NBA

Anyone who had the misfortune of watching Virginia Tech defeat NC State 47-24 during the 2019 NCAA Tournament knows just how low-scoring college basketball games can be. On average, NCAA Division I teams score around 68 points per game, compared to roughly 105 points in the NBA. There are main reasons for this discrepancy:

It’s crucial to understand these differences when wagering on totals. It isn’t uncommon for NBA teams to combine for 225 points, but it’s unheard of in the NCAA unless a game goes to multiple overtimes.

2. Sportsbooks Are Less Familiar with NCAA Teams vs NBA Teams

Handicapping the NBA is far from an easy feat, but it’s a breeze compared to the NCAA, where there are 351 Division I basketball teams. It’s nearly impossible for sportsbooks to have a feel for all of those teams and their incoming players early in the season, especially when many of them are still focused on handicapping NFL, NBA, and college football games.

As a result, bettors can make a ton of money in November and December by doing their homework and focusing on lesser-known schools from smaller conferences like the Horizon League or the Colonial Athletic Association. You may not be a fan of the Towson University Tigers now, but you will be after they make you a couple hundred bucks.

That said, research is critical if you want to find success. There is no substitute for time and effort. The only way a sports bettor will have a better feel for a game than a sportsbook is if the bettor is more familiar with the teams. Bettors can use sites like TeamRankings to track every Division I squad’s record against the spread, while advanced metrics like KenPom provide a gauge of offensive/defensive efficiency, among other things.

It should be noted that not every Division I basketball game will be available for wagering at every sportsbook. This is precisely because sportsbooks know their limit when it comes to accurately handicapping teams. If the powers-that-be at an online betting site feel they cannot set an accurate spread, they simply won’t offer that game on their menu. Pick a college basketball betting site from this list to ensure you have more options to choose from.

However, the number of games that aren’t available for wagering becomes smaller and smaller every year, because the predictive models from KenPom and Sagarin are basically cheat-codes that both sportsbooks and sports bettors can lean on.

3. The College Schedule Is Less of a Grind

When it comes to scheduling, college kids have it easy. Most Division I teams play only 35 games per year and typically max out at two games per week after season tip-off tournaments. By contrast, NBA teams play 82 regular season games and frequently play three to four games per week. The average NBA team also plays 14.4 back-to-back games per season, which, again, is something college teams only experience during tournament play. More games mean more travel. The average NBA player racks up over 40,000 air miles per season as they criss-cross the continent multiple times per month.

All of that travel, across all those time zones, takes its toll on players. Studies have shown that excessive travel adversely affects reaction time, wreaks havoc on circadian rhythms, and even lowers testosterone levels. It’s the reason why so-called “scheduled losses” are so common in the NBA.

Bettors have to consider the role of player fatigue far more carefully when making bets on the NBA vs. college basketball. That means examining schedules, considering mileage, and looking at whether road teams are just embarking on a trip (when they should still be fresh) or wrapping one up. Conversely, bettors can generally assume that college players will be physically rested at the start of every game. (Whether they are mentally rested depends on which school they go to. It’s pretty safe to assume North Carolina’s starting five wasn’t up all night cramming.)

4. Home-Court Advantage Is a Bigger Factor in the NCAA

All teams prefer playing at home, but a home-court advantage is a far bigger deal in the NCAA; college teams average nearly four more points at home than they do on the road. That’s a full point higher than in the NBA, and it comes down to a couple factors:

Bettors need to weigh the importance of home-court advantage far more carefully when wagering on the moneyline in the NCAA. It’s also important to understand that road underdogs fare far worse in the NCAA vs NBA.

5. Rivalries Matter More in College Basketball vs the NBA

The Golden State Warriors and Cleveland Cavaliers have developed a nice little rivalry over the past four seasons, but it pales in comparison to the decades-long regional rivalries between college teams across America. Take, for example, Duke and North Carolina, who have squared off 251 times since 1920. Or how about Kansas and Kansas State, who have been battling it out since 1907. It’s more than a game every time these teams meet – It’s a borderline religious experience for players and fans alike. Blood is spilled, tears are shed, and indelible new memories are created.

Bettors need to take these rivalries and the resultant animosity between schools into account before laying down their bets. Some schools use them to exact revenge for previous losses, while others use them as motivation and manage to cover seemingly impossible spreads. As the opening lines at sportsbooks become more and more computer-based, they fail to factor in the intangibles of rivalry games. History suggests that there is often value in betting a big underdog in a rivalry game.

6. The Talent Gap Is Bigger in the NCAA than in the NBA

There are 491 players in the NBA, and they’re all exceptionally talented (yes, even Wesley Johnson). Each and every one of them was likely the best player on his high-school squad, AAU team, and college program. Some score more than others, and some have a more pronounced impact on the court, but that’s often a matter of opportunity and fit, rather than talent.

Conversely, there are 4,563 Division I men’s basketball players, and only 1.1-percent of them will ever make it to the NBA. Some are good, some are mediocre, and some are downright bad in comparison. The talent discrepancy between the best and worst of these players is less like a gap and more of a giant chasm. Just think about this: in 2015, Kentucky sported a roster that included Karl-Anthony Towns, Devin Booker, Trey Lyles, and Willie Cauley-Stein, four players who were all in the NBA the next season. Early in the year, they played the likes of Grand Canyon, a team ranked 263rd on KenPom and filled mainly with Phoenix area kids passed over by bigger schools. Kentucky won by 40, and it could have been worse. Grand Canyon had 16 points in the first half. Towns and Cauley-Stein combined for seven blocks in just 45 minutes. It resembled a big brother/little brother driveway game.

Great players and great teams have a far more significant advantage in the NCAA, where they can dominate the weaker competition. That’s something bettors need to bear in mind when betting on college and the pros. You shouldn’t necessarily balk at 20 and 30-point spreads. Often, smaller schools are entirely overmatched.

7. College Rosters Can’t Change Much During the Season

College rosters generally remain the same throughout the season, but that isn’t the case in the NBA, where general managers are constantly trying to upgrade their teams via trades, free agency, and G-League call-ups. Some in-season trades and signings barely make a ripple, while others instantly transform a middling team into a championship contender. Consider the case of the 2001 Philadelphia 76ers, who advanced to the NBA Finals after picking up Dikembe Mutombo at the trade deadline, or the 2004 Detroit Pistons, who won their third championship after wisely acquiring Rasheed Wallace from the Portland Trail Blazers.

It generally takes sportsbooks a few games to determine how a newly-acquired player will affect a team’s performance, and there’s a lot of money to be made during this period of uncertainty. NBA bettors need to look at all incoming and outgoing personnel and carefully consider how a trade will affect a team’s performance, chemistry, and morale. In contrast, by the time March rolls around, both sportsbooks and bettors will know how college teams fit together.

The exception, of course, is injuries. Despite the lighter schedule discussed above, college players are not immune from getting hurt, and injuries can throw a team entirely out of whack.

College teams don’t have the ability to go out and make a trade when a key player goes down, and they may not have the roster depth to handle it in-house. The 2017-18 Notre Dame Fighting Irish are a perfect example. Their roster was already thin in the frontcourt when their Mr. Everything, Bonzie Colson, suffered a foot injury that would sideline him for months. Ranked as high as no. 5 in the nation before the preseason All American went down, the Irish would go onto play .500 basketball in the aftermath. They were only held under 70 points twice with Colson in the lineup but failed to crack the 70-point plateau in regulation time in four of their next six.

If you’re trying to get over the hump and boost your bankroll in a big way, you’re going to have to do your research.

Thankfully, we’ve got your back, and we’re confident we can point you in the right direction with our guide to the sharpest sports betting strategies. You’ll find advice specific to betting on March Madness along with more general tips you can apply to professional and college ball alike.

Please remember to always wager responsibly – even the best strategy and inside knowledge won’t make up for irresponsible behavior.