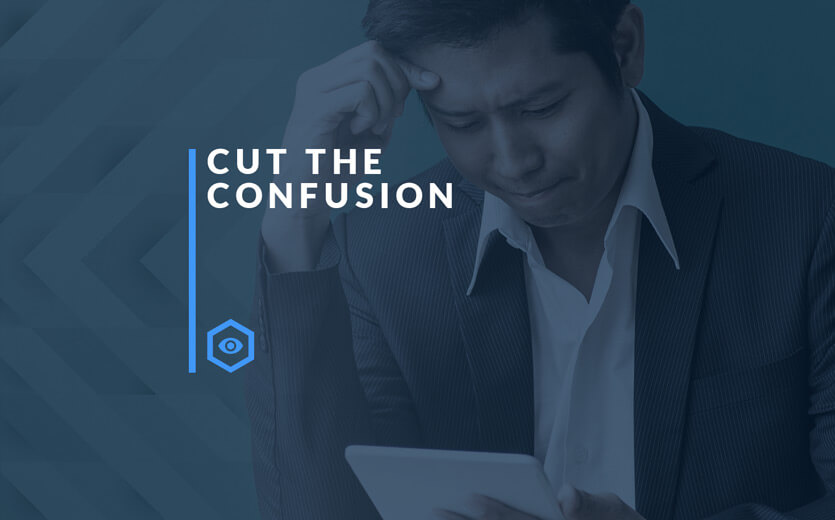 Sports betting has a long and complicated relationship with the law, particularly in the United States. From the nation’s strictly religious Puritan roots to the relatively open era of online gambling, legislation around sports betting and gambling more generally has been a continual back and forth between moralistic, conservative views on games of chance, the government’s insatiable appetite for new revenue streams, and deep-seated cultural values regarding personal freedom.

Those who enjoy a bit of action on their favorite games have long been caught in the middle. With the recent repeal of the Professional and Amateur Sports Protection Act (PASPA), sports betting is no longer prohibited at the federal level. States are now able to regulate the practice however they see fit, resulting in a patchwork of legislation that means what’s legal in one state is not necessarily legal in others. You can track the legality of sports betting in your state here at Sports Betting Dime.

Unsurprisingly, there’s a bit of confusion among American sports bettors around this constantly fluctuating legal environment. Results from a recently commissioned Sports Betting Dime survey of active bettors suggest many are failing to understand the complex web of laws that currently define the legal landscape.

Let’s start by establishing the fact that most states have not yet developed a legal framework that explicitly allows and regulates sports betting within their boundaries. While placing a bet at an online sportsbook offers a viable option for bettors from around the country, only a handful of states currently allow bettors to wager on single games at a casino, brick and mortar sportsbook, or locally-operated online betting site. 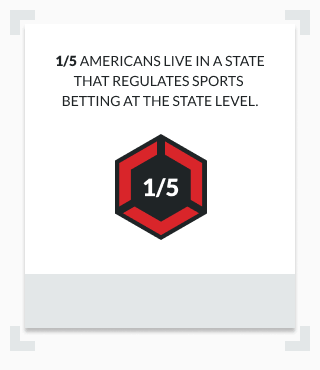 Major population centers such as New York, New Jersey, and Pennsylvania are included in this category, along with much smaller, rural states like Montana and Mississippi. At the time our survey was distributed, 21.55% of Americans lived in a state with operational sports betting regulated at the state level, based on the most recent population estimates derived from census data.

Be sure to visit our sports betting legal section if you’re looking for a deeper understanding of the laws around sports betting.

What Do Bettors Think?

Most sports bettors believe the practice is legal at the state level in their state, while a sizeable portion admit they aren’t really sure. 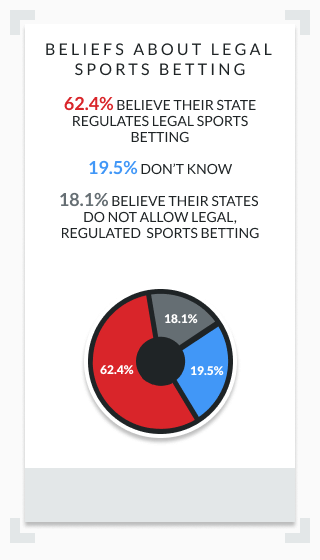 Survey respondents represent a large cross-section of the American population, with a nearly even breakdown from each major census-designated region of the United States. With this fact in mind, it’s immediately clear that bettors are overestimating the degree to which sports betting has been legalized and regulated at the state level.

We wanted to find an exact number to illustrate this lack of understanding, so we tallied the percentages of respondents who live in states that currently offer regulated legal markets.

About four in ten respondents (36.1%) live in a state that offers a state-regulated legal sports betting market, despite the fact more than six in ten (62.4%) stated that they lived in such a state.

Clearly, there’s some work to be done in terms of educating the betting public about the nuanced legal environment that exists in the United States.

Much of the confusion can likely be chalked up to a general lack of understanding regarding conflict between federal and state law. The United States is a federal republic with significant legal power and autonomy reserved for state and local governments. Hot button social issues such as abortion and the legalization of marijuana have highlighted these tensions, with states continually opting to defy federal law in pursuit of their own policy agendas.

Marijuana legalization provides a particularly interesting case study, as the federal government has explicitly chosen not to intervene as many states have established legal markets despite the plant’s designation as an illegal Schedule I narcotic under the Controlled Substances Act. So, is marijuana legal in states with legal recreational or medical markets? Kind of…

It’s important to remember that our system of governance was designed to allow for these contradictions.

The federal government does not prevent individuals from legally betting on sports, and many bettors likely confused the PASPA repeal decision as blanket legalization of a regulated market nation-wide.

Grey areas and disconnect between local and national laws are a natural consequence of large federations, particularly those with a tradition of common law. Sports betting provides a unique example of this disconnect because unlike with marijuana legalization, the federal government does not prevent individuals from legally engaging in the activity.

No individual has ever been prosecuted for the simple act of online gambling, and many bettors likely confused the PASPA repeal decision as blanket legalization of a regulated market nation-wide.

Does PASPA Even Matter?

Considering that it’s largely legal for Americans to bet online from the comfort of their own homes, who really cares if individual states set up their own legal frameworks? This is a valid question, and the data suggest that the PASPA repeal has had only modest effects on the behavior of existing sports bettors. 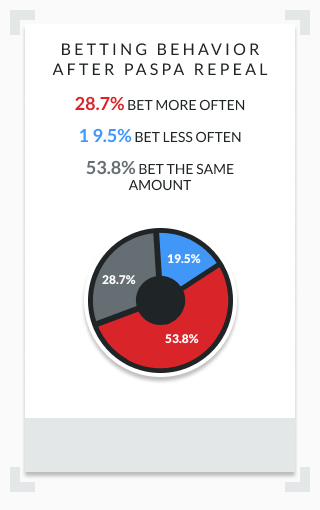 These numbers suggest that widespread state legalization of sports betting is unlikely to drastically change the behavior of existing sports bettors, strongly refuting the notion that it will significantly increase the incidence of problem gambling in the US.

For most, the truth is that the PASPA repeal has, to date, done little to make sports betting more accessible. Online sportsbooks have long provided a safe and reliable option, and the survey results suggest that bettors are largely satisfied with their services.

And while nearly seven in ten (68.8%) suggest they would prefer to bet with a US-based sportsbook, their preference for online betting seems to be stronger than these patriotic tendencies. Of the states that have set up regulated markets at the state level, only a handful have opted to allow online, remote access.

The preference for online betting opportunities may help to explain why less than one in ten survey respondents (9.2%) has changed where they place sports bets following the PASPA repeal, despite the fact the nearly four in ten (36.1%) live in a state that has offered new betting opportunities since the decision.

Of course, the PASPA decision does matter in terms of changing public perceptions and reducing stigma around betting on sports. It has provided substantial revenues for states that have acted quickly to develop a regulatory framework. That said, the suggestions of policy experts who point out that allowing online wagers will be crucial in making the most of legalization are clearly supported by the data from this survey.

About the Sports Betting Dime Survey