American Sports Bettors Pray for the Best – Who Bets on Sports in the US? 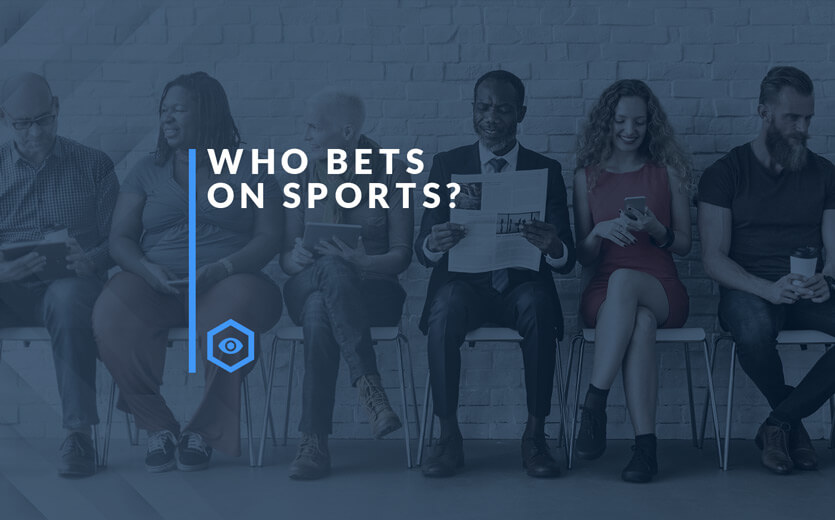 Sports betting is currently enjoying something of a Renaissance moment in America. Sports fans and dedicated bettors across the country are taking full advantage of a more permissive legal environment and the ease of wagering at online sportsbooks.

With estimates suggesting that Americans wagered between $80 – 380 billion dollars per year on sports even before federal legalization, it’s obvious that a large portion of the public is getting in on the action. Sports Betting Dime wanted to find out exactly who these American sports bettors are and how they’re betting, so we commissioned a survey to explore common characteristics and betting behavior.

The findings reveal several interesting insights regarding the archetypal American sports bettor, but the biggest take away is that a huge diversity of people enjoy betting on sports. The data suggests that sports betting has widespread popular appeal that cuts across social and regional lines, similar to professional and collegiate sports themselves.

Who Bets on Sports?

Lots of Women Bet on Sports

Sports betting is often presented as an activity reserved mostly ‘for the boys.’ While the cultural narrative pushed by many gambling marketing materials and popular sports betting movies tends to revolve around male protagonists, (with the obvious exception of Lay the Favorite), the reality is that a large proportion of sports bettors are in fact women. 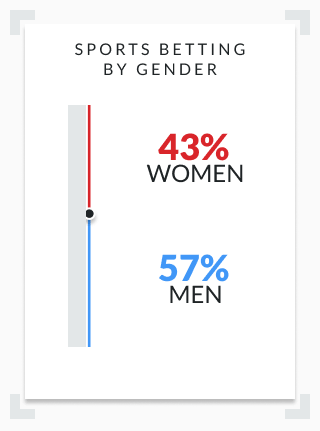 While the split isn’t quite 50-50, some readers might be surprised to learn that more than four in ten active sports bettors identify as women. Sports and gambling media should take note of this demographic reality and provide more coverage of all the successful female sharps out there.

The data suggest that men and women bet with similar frequency, but men tend to take on more risk, wagering more on average each month than women. While nearly three in 10 male bettors (29.7%) wager more than $500 per month, just one in 10 (12.2%) female bettors do the same. By contrast, 65.2% of female bettors risk less than $100 per month.

When breaking down the numbers by age and race, it’s clear that most sports bettors in America are white and middle aged.

Erase your pre-conceived notions of geriatric retirees tolling away at the slot machines or college fraternity bros racing to get some money down before Saturday college football games. The data suggest that those over 55 aren’t really interested in betting on sports, and that very few youngsters are lining up to place a bet right after their 18th birthday.

Most racial groups bet on sports in similar proportions to their overall representation in the US population, with white people betting at a proportionally higher rate and Hispanics betting at significantly lower rate.

Bettors Are Highly Educated, Well Off, and Play the Stock Market

While gambling of any type is sometimes wrongly characterized as a pursuit for fools or those who ‘don’t know better,’ the truth is that most sports bettors are better educated and make more money than the American population overall.

All those degrees seem to be providing bettors some extra cash for their bankroll, with most earning more money than the median household income of roughly $63,000 per year.

Unsurprisingly, those who wager the most money on sports tend to earn more, with 80% of bettors risking more than $5,000 per month earning over $100,000 per year.

A strong majority of those who bet on sports also invest in the stock market, which won’t come as a surprise to those who recognize the similarities between investing and sports betting. 65.6% of bettors invest in the stock market or other financial securities, with a slightly higher number (71%) stating that they view betting on sports as a form of investment. By comparison, 55% of Americans overall reported owning stocks in a comprehensive 2019 Gallup study. 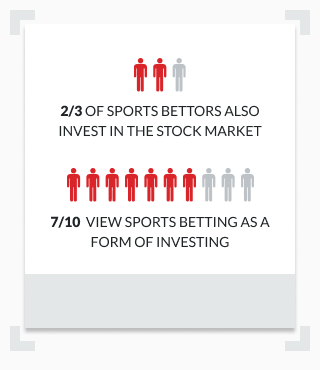 Sports Bettors Show Up to Vote, Mostly for Trump

Advocates for further legalization of sports betting at the state level will be encouraged to hear that current bettors are extremely engaged with politics. While approximately 45% of the voting age population chose not to vote in the 2016 Presidential Election, this number was just 12% among current sports bettors.

Sports bettors don’t appear to strongly lean one direction politically, but they did prefer Donald Trump over Hillary Clinton, with 42.3% backing the Donald and 36.6% voting for the former Secretary of State (remaining percentage abstained or voted third party). 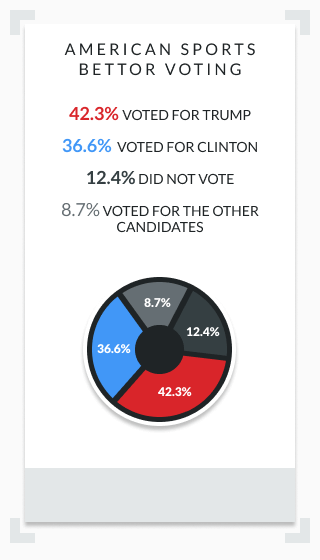 Interestingly, there is a statistically significant relationship between the frequency with which people bet and their political leanings – nearly seven out of 10 (68.2%) of those who bet daily voted for Trump, whereas those who bet just ‘several times a month’ preferred Clinton by a margin of 45.1% vs 33.8%.

Most Sports Bettors Are Religious

Most sports bettors identify as religious, even though gambling has been historically discouraged or outright criticized by many religious institutions and Christian churches popular in the United States.

Over half of current sports bettors (53.6%) consider themselves religious, and a sizable proportion of that group frequently attends church. 49.6% attend on a weekly basis, with a further 21.3% attending monthly.

Obviously, religious affiliation and the views of the church are not stopping people from getting some action down on their favorite games, despite the best efforts of pastors and churches to keep the activity both stigmatized and illegal.

Most Popular Sports & Events for Betting

American bettors are wagering on a wide variety of leagues and events, but football and basketball are by far the most popular sports to bet on.

Which Sports Are Most Popular to Bet On? 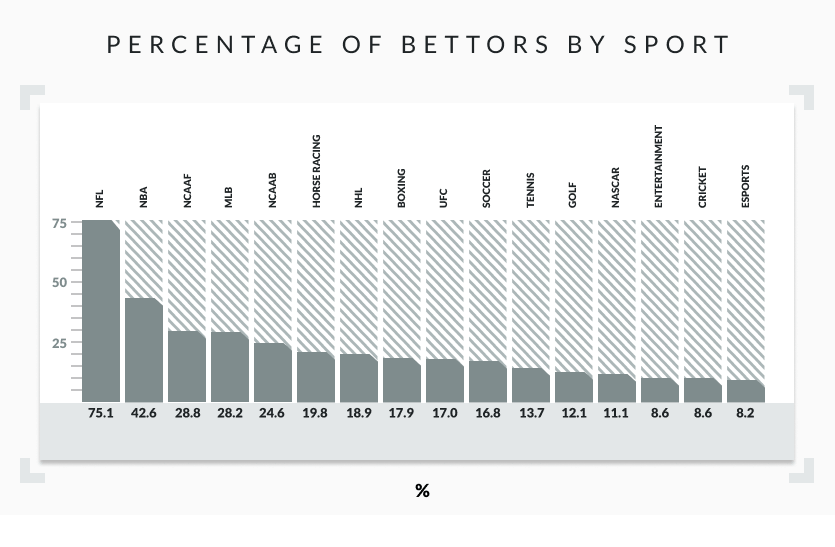 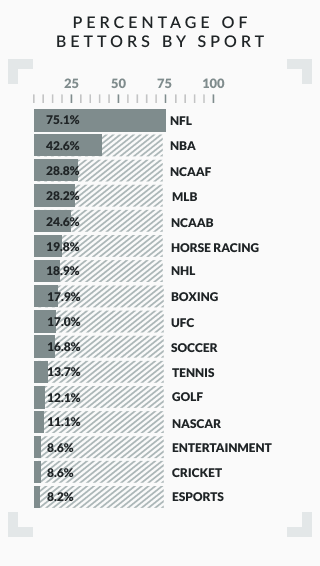 Which Events Are Most Popular to Bet On? 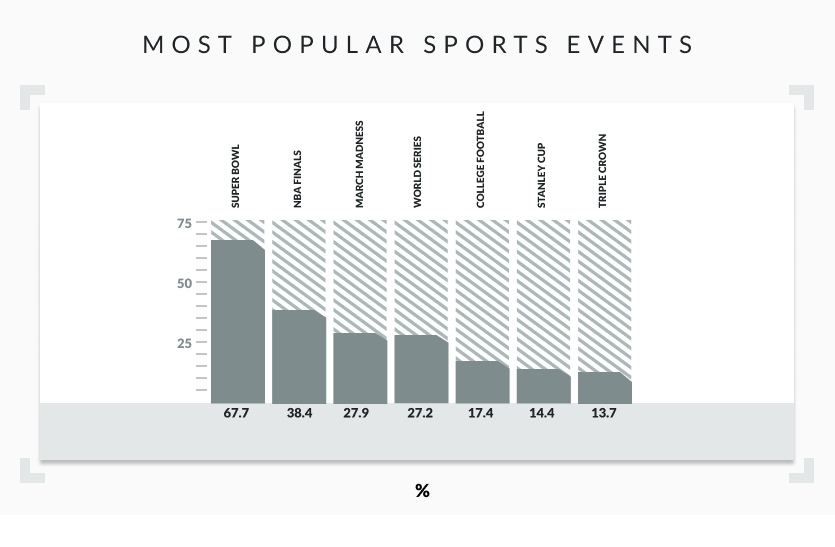 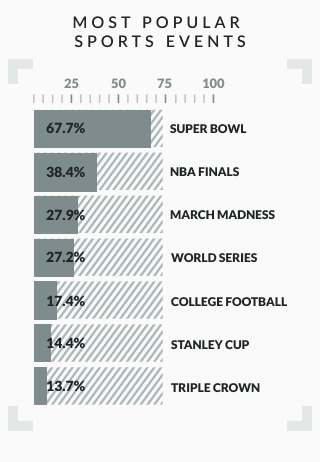 Most Bet Online and Also Wager on Fantasy Sports

The internet fundamentally changed the face of sports betting worldwide, and placing a wager is now as easy as clicking a button on your smartphone. It’s no surprise that American bettors are taking full advantage of the convenience of online sportsbooks.

More than half (55%) have placed an online wager from their mobile phone, highlighting the importance of mobile betting as the industry continues to evolve. 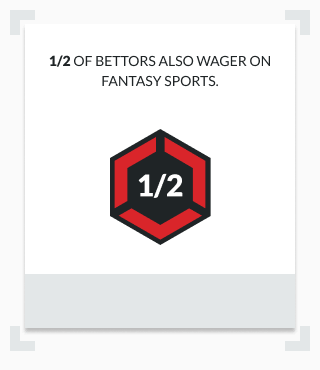 Fantasy sports are also widely popular among those who bet on sports. Nearly seven in 10 sports bettors play fantasy sports, and most of them (51.6%) also wager on their fantasy picks.

From the sports they’re betting on to their religious and political preferences, American sports bettors are nearly as diverse a group as the country itself. As the historical stigma around betting on sports betting rapidly fades, there is massive opportunity for gaming companies and sports leagues to bring even more Americans into the fold.

We’ll be here at Sports Betting Dime to help them get started on the right foot.