Time to Cash In for College Athletes 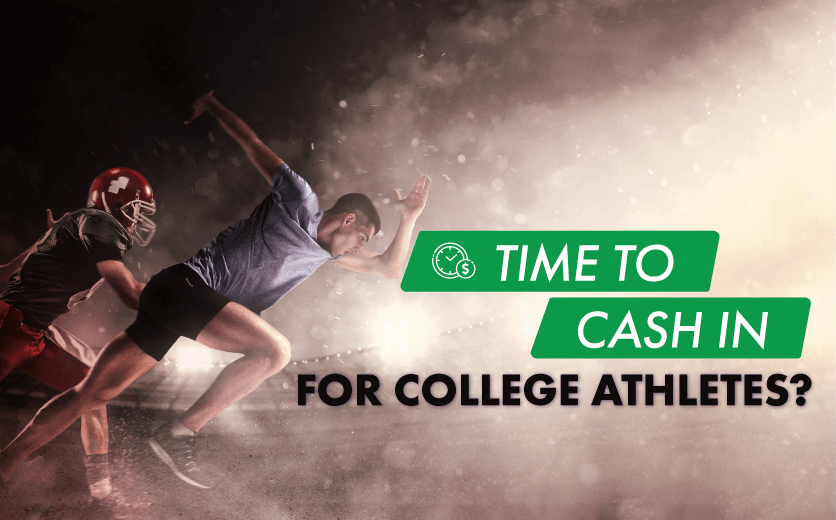 Proposals to pay college athletes are growing in number and persuasiveness. Universities generate hundreds of millions of dollars off their athletes, not to mention the brand recognition the college can also earn from having a star player. “Amateurism” has traditionally prevented college athletes from profiting off-brand endorsements and other avenues, while the current conversation typically revolves around the commercial use of their name, image, and likeness (NIL). After the years-long debate, is it time to pay college athletes? It seems some institutions already are.

To gauge how public opinions are changing along with the times, we asked more than 1,000 people across the country what they thought would happen if college athletes started getting paid. Do most stand in support of the NCAA’s decision to allow student athletes to monetize their NIL? What misgivings do people still have about college athletes earning money? How do people perceive a rule change will affect performance and recruiting dynamics? Keep reading to see the latest data-backed information on paying today’s college athletes.

How would paying amateur athletes change the culture of college sports, if at all? Would it broaden the fan base? And which athletes should get paid the most? Our study kicks off by asking these questions. 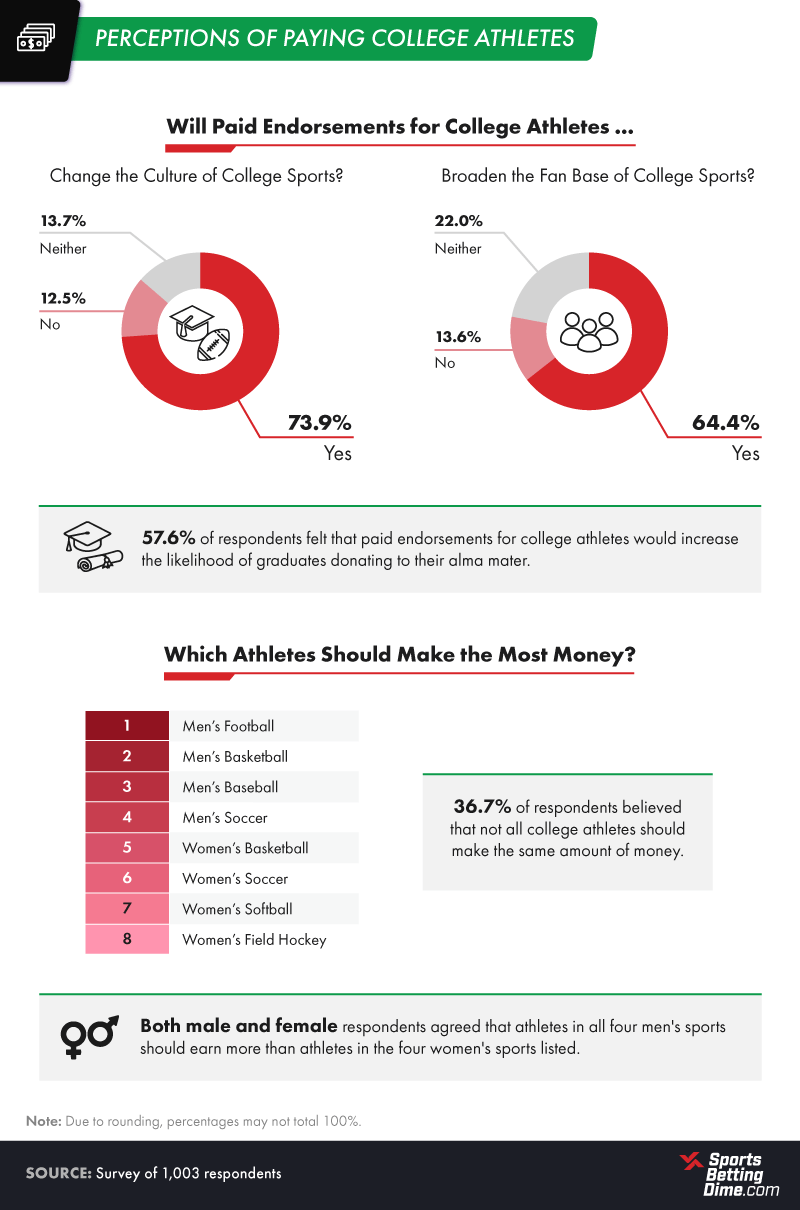 Most (73.9%) were in agreement that paid endorsements for college athletes would change the culture of college sports. For many, one such change was that involving money would broaden the fan base. And more than half (57.6%) felt that paid endorsements for athletes would also result in more graduates donating back to their alma mater – a potential benefit to all students, not just those involved in sports.

In the mind of many respondents, however, not all college athletes should be treated equally. More than a third (36.7%) disagreed that every athlete should earn the same amount of money. But instead of basing this on talent, most felt it was the sport itself that should dictate earning potential. Unfortunately, this question unearthed some inherent gender biases when it came to college athletes. When asked which sport should see its athletes make the most money, respondents ranked men’s football, basketball, baseball, and soccer in the top four positions – above all four of the women’s sports listed. Surprisingly, the answers of both male and female respondents yielded identical results.

If paid endorsements become legal across the board in college sports, what would the impact be? We asked respondents how paid endorsements would change athletic performance and overall education. We also asked them to list their top reasons for and against paying college athletes.

Respondents generally thought that the overall performance of college athletes would improve if they were paid. However, many also argued that there were real downsides to monetizing college sports. For instance, 45.3% felt that it would give the athletes too much power, while another 41.6% agreed that having their education paid for was payment enough. That said, only 1% of student athletes receive full tuition. The average value of waived tuition fees for student athletes equates to $18,000 per year; in other words, most athletes are still partially paying for their education.

People tended to agree more readily on reasons to pay college athletes. The most popular argument was that the NCAA was profiting significantly off their performance (56.1%), and the people doing the hard work on the court or field deserved a cut. Tellingly, we found that 1 in 10 respondents were unable to think of a single reason why a college athlete should not be paid. 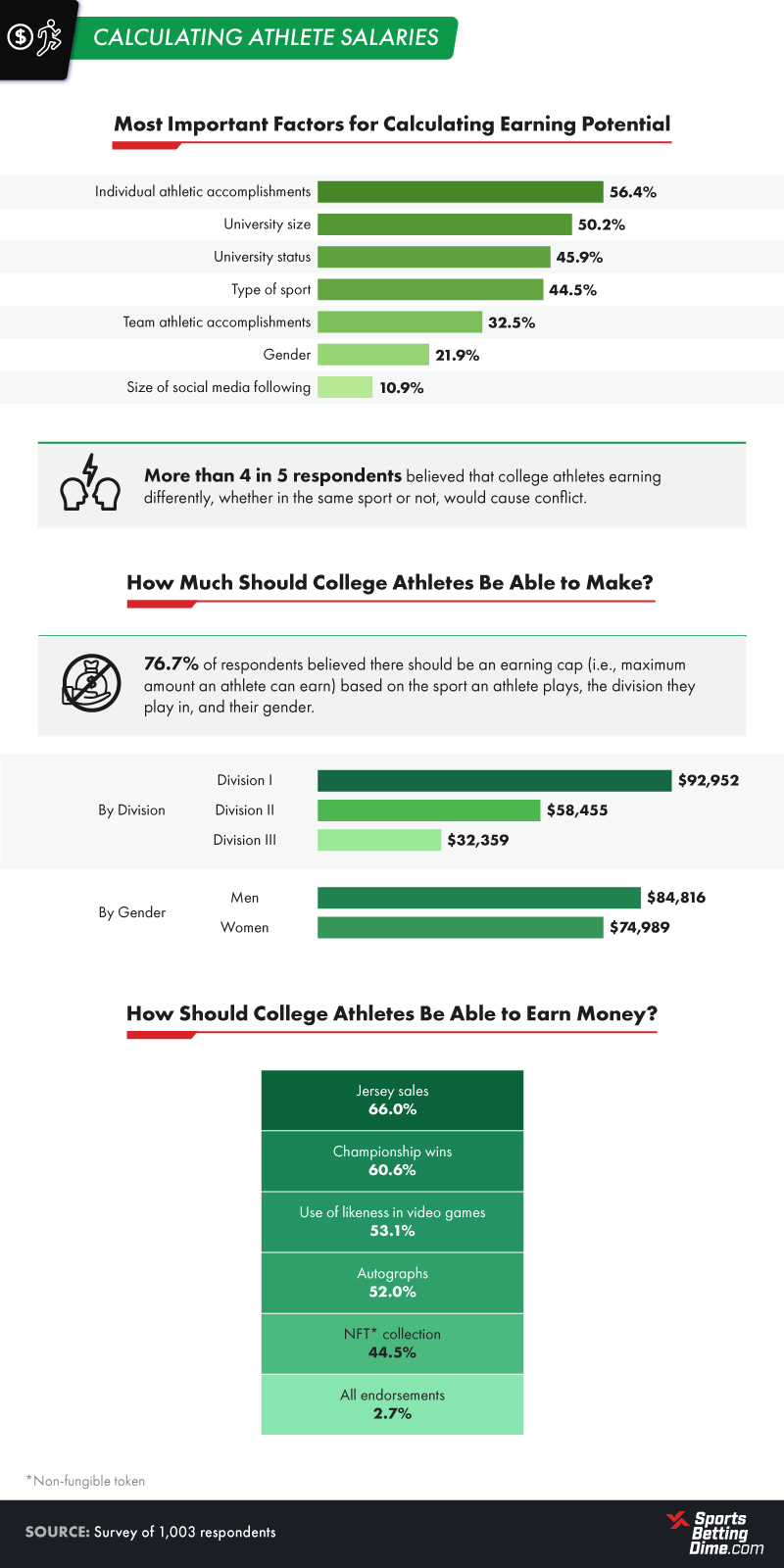 If college athletes start getting paid, determining their earning potential presents a new challenge. More than half of our respondents thought athletes’ earnings should be determined by their individual athletic accomplishments, while another 50.2% said the amount should reflect the size of their university. Eighty percent believed that college athletes earning different amounts within the same team would ultimately cause conflict, adding to the difficulty of deciding payment amounts.

Even those who felt that athletes should be paid agreed that some type of financial limit should apply. For Division I athletes, this cap averaged at $92,952 annually. Unfortunately, the gender wage gap persists in these theoretical salaries as well. While people felt male college athletes should earn up to $84,816 a year, they felt that female athletes should only be able to earn a maximum of $74,989.

Sports betting is an enormous industry in the U.S. – with a significant chunk centered on college sports. In 2019, Reuters predicted that Americans would bet more than $8.5 billion on the results of the NCAA March Madness basketball competition alone. So how would paying college athletes impact sports betting? Results surrounding this question are listed below. 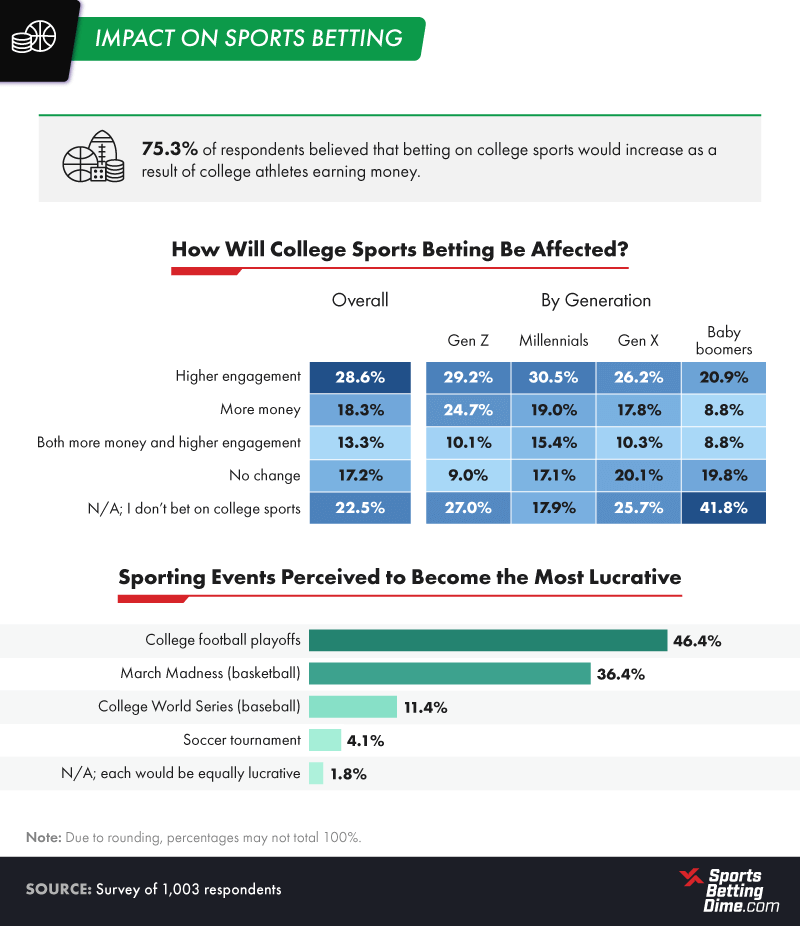 With performance increasing and perhaps even conflict arising, most respondents felt that paying college athletes would spice things up enough for them to want to gamble more as well. In other words, 75.3% believed that betting in college sports would increase as a direct result of paying the athletes. Millennial respondents were especially likely to agree that their personal betting engagement would increase.

According to our survey takers, the most lucrative sport would be college football, which actually represents the status quo. Since the late 1800s, this sport has brought in more money for universities than any other. March Madness took a not-so-close second, with 36.4% of respondents saying basketball would become the most lucrative sporting event for athletes and bettors. Just 1.8% believed that all kinds of sports would be equally lucrative.

Of course, the question of potential endowments is likely on universities’ minds when they consider paying athletes. Endowments provide crucial financial stability to a university, as well as name recognition and additional opportunities. Due to the NIL rules, university name recognition and endowments now directly relate to a player’s earning potential. The last part of our study asked respondents which individual college programs they feel stand out and would benefit college athlete earnings the most. 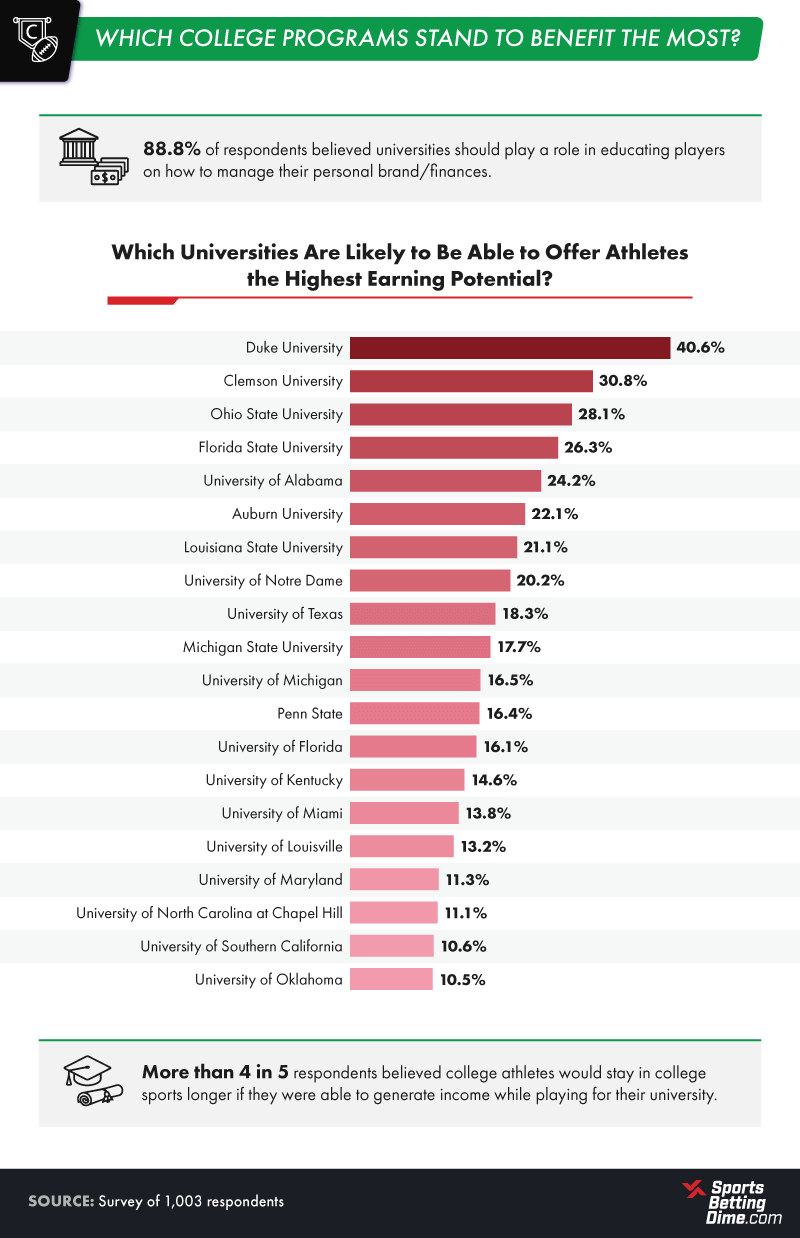 Duke University, with an already existing endowment of over $8 billion, was thought to be able to provide student athletes with the highest earning potential. This school has also been one of the top feeder schools for the NBA for many years, meaning that while their athletes may not have made a fortune during their college years, they ultimately end up incredibly well paid as a result of the time they spent playing at the school.

Clemson University took second place, with 30.8% of respondents thinking this school would be able to pay its athletes the most. Clemson’s current endowment pales in comparison to Duke’s, totaling an estimated $771 million. Other popular schools for potentially high athletic payments were Ohio State University (28.1%), Florida State University (26.3%), and the University of Alabama (24.2%).

Respondents were quick to share their belief that athletes would likely stay in school longer were their performances to be paid, indicating a potential improvement in education as well as athleticism. This could provide student athletes with a good fallback plan in the event of an injury or lack of recruitment. Ultimately, respondents mostly agreed that students should be paid, simply because of how much money they’re helping bring into their schools.

With the NCAA already providing avenues for athletes to earn money off their NIL, college athletes getting paid appears to be becoming a reality. If you’re like the many who shared that they would increase their betting engagements were this to happen, you’ll want to check out SportsBettingDime.com. Sports Betting Dime has the latest stats, information, and articles to help inform any bets you’re interested in making. To get started, head to our homepage today. If you’re a fan of college sports in the Nutmeg state, check out available Connecticut online sportsbooks now that it’s an active state.

The primary limitation of this study is self-reporting on the survey, which can lead to multiple issues, including exaggerated answers, misunderstood responses, and recency bias.

What is your stance on the college athlete payment issue? Perhaps your point would be better made with data. You are welcome to share the findings from this article; just be sure your purposes are noncommercial and that you link back to this page.