Where Are All The Female Coaches in Major League Sports? 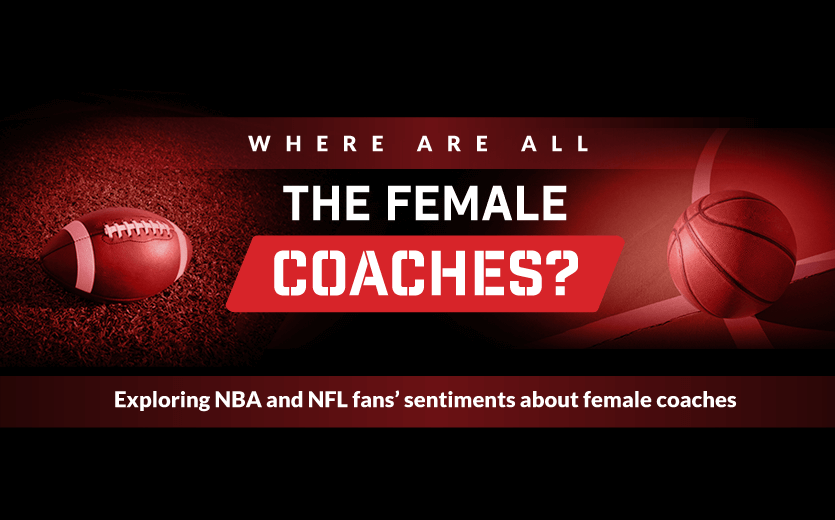 While there are established men’s and women’s professional sports leagues across the U.S., the coaching is predominantly male. We surveyed 1,208 NBA and NFL fans across America to get their perspectives on female coaching – whether they would support a female head coach and if their favorite player supported the idea, would that influence them?

We further broke down fan support on a team-by-team basis, explored some female coaching stereotypes, and saw what kind of must-have experiences women would need to succeed at the highest level, according to respondents.

In the world of coaching, all sorts of barriers prevent women from getting a fair shake. Societal factors such as sexism and gender bias, organizational hurdles like pay inequity and marginalization, and interpersonal barriers like a lack of a cohesive women’s network make it difficult for deserving women to thrive in a coaching position. We’ll explore some of these concepts to truly understand the discrepancy between male and female coaching across the country.

We started by asking sports fans about their support of female coaches and any beliefs they might hold toward them. 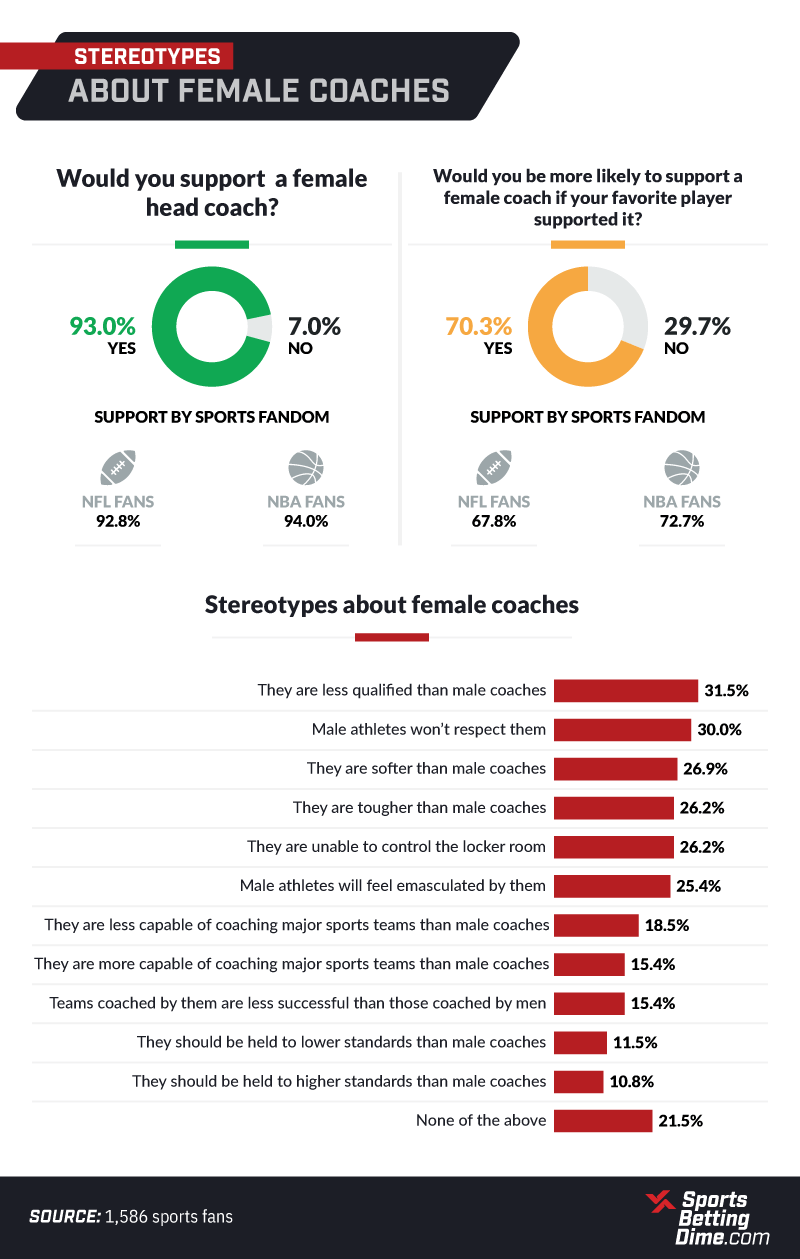 There was an overwhelming majority of respondents in support of female head coaches, with 93% rallying behind the idea. Additionally, if their favorite player supported a female coach, 70.3% of them would be more supportive of her as well. For both questions, NBA fans were slightly more enthusiastic about female coaches than NFL fans were, but the large majority of both fan bases backed it. However, as these responses were self-reported, one needs to consider that respondents might answered this way to avoid being seen as bigoted.

There are lots of stereotypes about female coaches – a third or more of respondents felt that they weren’t as qualified as their male counterparts and that male athletes wouldn’t respect them. Just over a quarter thought that male athletes would also feel emasculated by them, and 15.4% flat out believed that a female-led team would be less successful. These are bold and unfactual claims, considering how little representation women have in pro sports coaching – for example, there are only eight female coaches currently working in the NFL, compared to the many hundreds of male coaches throughout all 32 teams.

Lawmakers had the right idea in 1972 when Title IX, a law to promote gender equality, was introduced. At the time, across two dozen sports, more than 90 percent of women’s teams were coached by females… but that number has actually decreased to about 40 percent as of a few years ago. First of all, as high salaries became a reality in college sports coaching, many men became interested in coaching women’s teams to get a slice of the pie. There was almost no opportunity for women to coach men’s teams – only about 3 percent of teams are actually coached by a woman. On top of that, 80 percent of college athletic directors are men. Other factors that lead to lopsided coaching opportunities included lack of networking and mentors for women and a long list of gender biases.

In a next step, we looked at NFL fans by their respective teams, to see how sentiments about female coaches differed across the league. 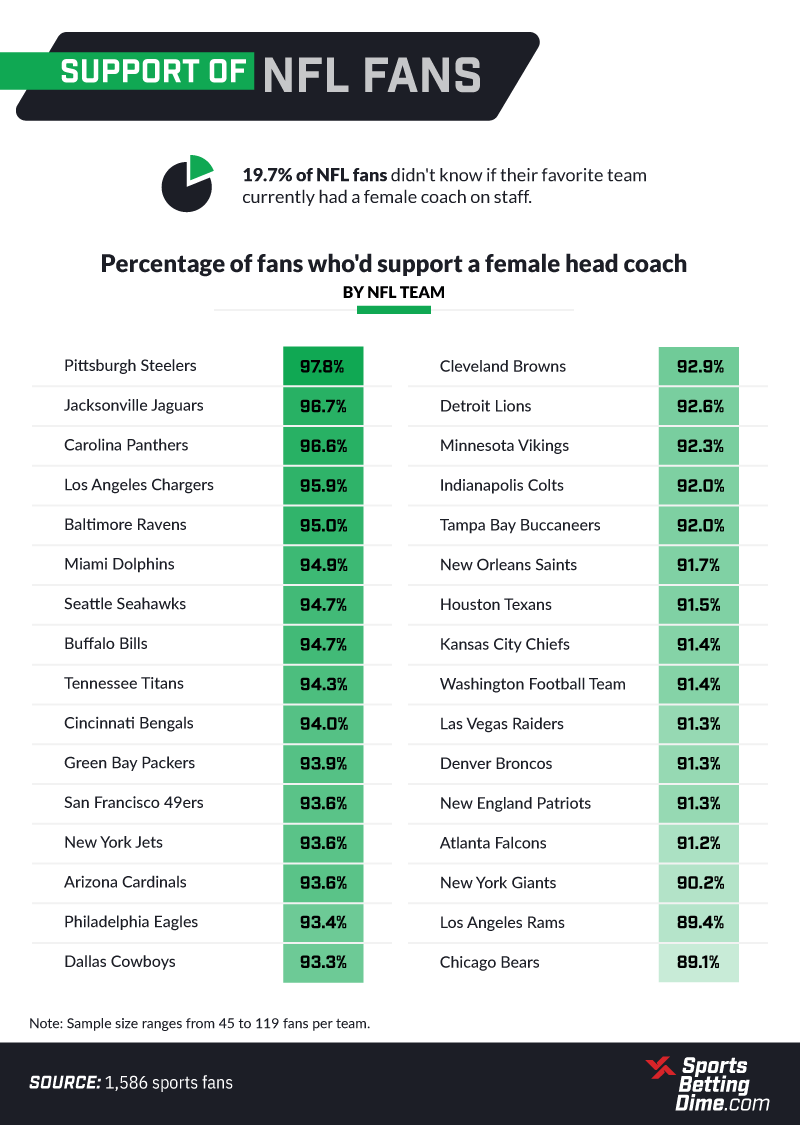 Seeing as there are so few female coaches in the NFL, just under 20% of respondents had no clue if their favorite team had one on the sidelines or not. Pittsburgh Steelers fans were the most supportive of the idea of female head coaches (97.8%), and 29 other teams had an acceptance rate of over 90%. Only Los Angeles Rams and Chicago Bears supporters were less than 90% supportive at 89.4% and 89.1%, respectively. Regardless, it’s clear that there is a leaguewide acceptance of the idea of a female head coach. In the 2020 playoffs, six out of the eight female coaches were a part of teams in the hunt for the Lombardi Trophy, and history was made as it was the first time where opposing playoff teams had women on both sidelines.

The narrative of female coaching in the NFL took its first major turn when the Arizona Cardinals hired Jen Welter as an intern in 2015 – she was the first female coach in NFL history. As a child, Welter fell in love with the sport, and amassed 14 years of experience playing in female flag-football and tackle leagues. She broke through many stigmas and barriers throughout her career, constantly being labeled ‘a woman in a man’s game’. Her spirit never broke though, and she became the first female non-kicker to play in a professional men’s indoor football league. That same team then hired her as a linebackers coach, and then the Cardinals came knocking soon after. Welter’s story is an inspiring one, and she is a true pioneer of female coaching at the highest level.

Additionally, we also asked the fans of NBA teams to discuss their views on female coaches, and to find out how these feelings differed across the teams. 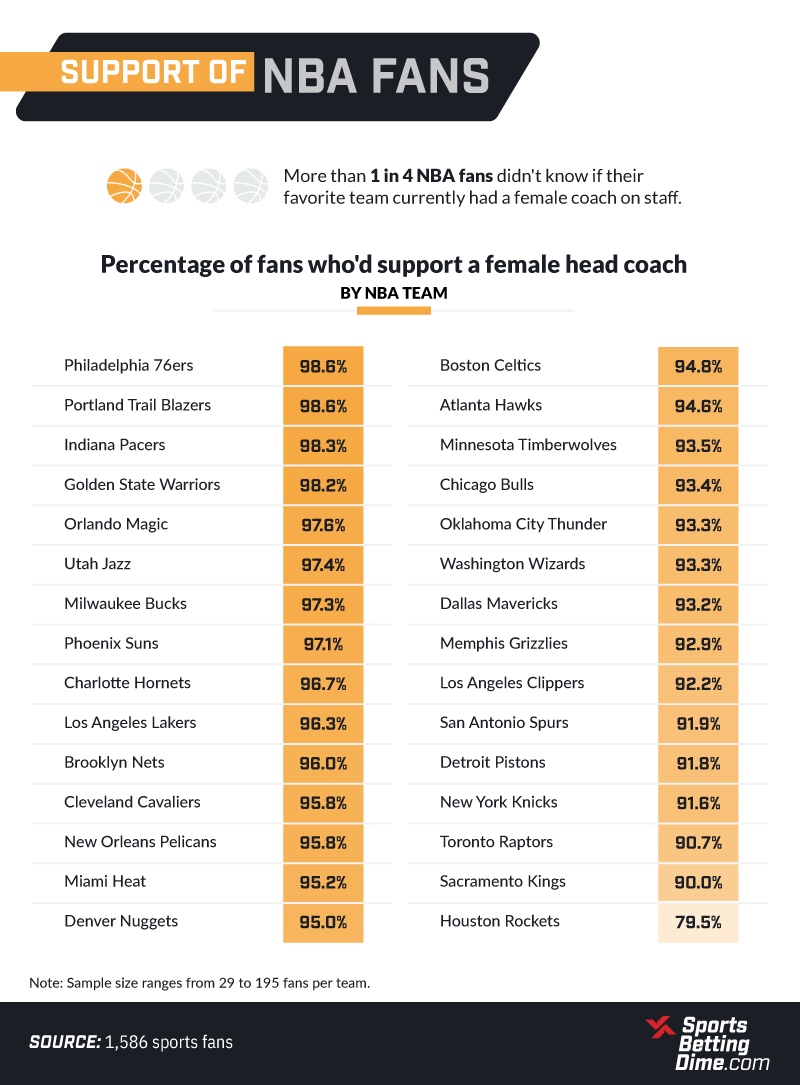 Similarly for NBA fans, many (over 25%) were unaware if their favorite team employed a woman on their coaching staff. For almost all teams, more than 90% of fans would support a female head coach, with Philadelphia 76ers and Portland Trail Blazers fan bases being the most accepting (98.6% apiece). Only one team had less than 90% support; the Houston Rockets fans were the most critical of the idea of a female head coach, with only 79.5% in support of one.

On December 30, 2020, San Antonio Spurs head coach Greg Popovich was ejected in the middle of a game, and Becky Hammon, one of his assistant coaches, assumed the position for the rest of it. This had marked the first time a woman had served as an NBA head coach, and at the time, she was 1 of 6 women who held an assistant coaching job in the league.

Getting Their Foot in the Door 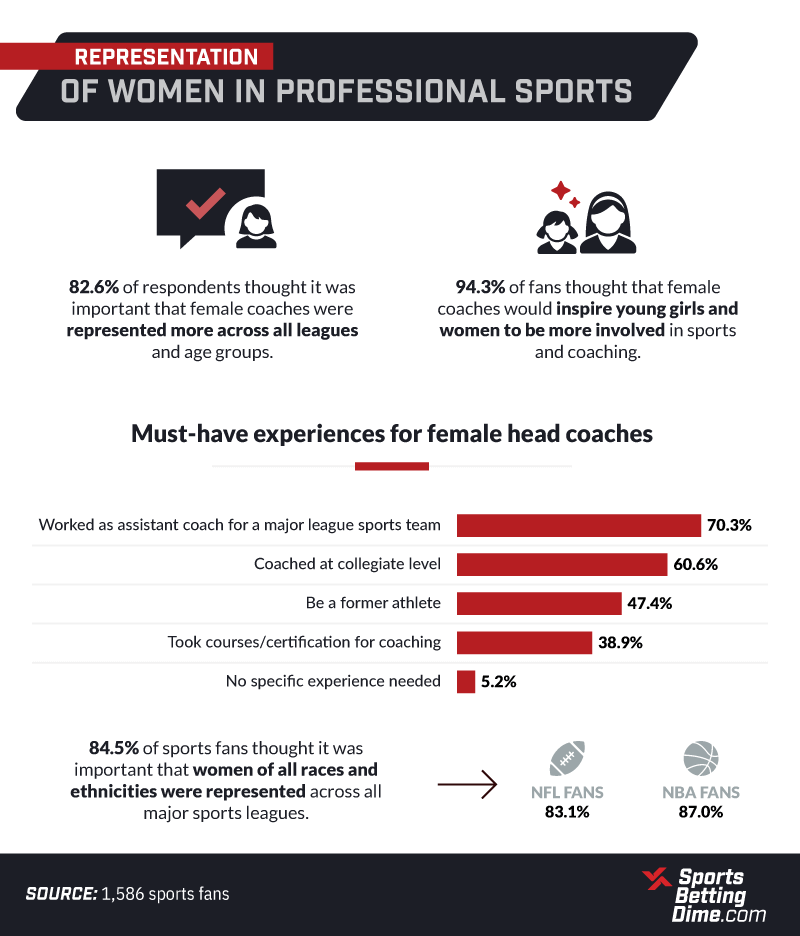 Over 80% of respondents thought that female coaches deserved to be represented more across all leagues and age groups. Interestingly, 88.3% of Democrats shared this sentiment, compared to 78.5% of independents and 73% of Republicans.

Over 94% of both NFL and NBA fans believed that female coaches were necessary to inspire the younger female generations to be more involved in sports programs and coaching. To establish themselves as successful and formidable coaches, 70.3% of respondents figured they would need experience working as an assistant coach on a major league team, and over 60% thought they would at least need some coaching experience at the collegiate level. Many others believed women would need to be former athletes or acquire proper training and/or certifications for the position in order to thrive in the role. Becky Hammon, for example, played 16 seasons in the WNBA, making the All-WNBA team four times and participated in the All-Star Game six times throughout her career. Clearly, she deserved to take on the head coach position that fateful night at the end of 2020.

While women are heavily underrepresented in the sports coaching world, it’s good to know that almost all fans across the NFL and NBA are in support of them in a head coaching role. There are tons of stereotypes floating around about why they may not be as good as male coaches but because we haven’t seen a female head coach yet, none legitimately can be taken seriously. What we do know, however, is that women are marginalized in the professional coaching world and deal with a handful of barriers that men simply don’t.

Understandably, respondents feel as if women need to have certain experiences under their belt before leaping into a coaching role. Women like Becky Hammon and Jen Welter, who have plenty of professional sports league experience and knowledge under their belt, will hopefully become trailblazers for women in coaching all across the country. They have the public’s support, so it’s time to break the stigma for good.

Methodology
This study uses data from a survey of 1,586 NBA and NFL fans located in the U.S. Survey respondents were gathered through the Amazon Mechanical Turk survey platform where they were presented with a series of questions, including attention-check and disqualification questions. 62.9% of respondents identified as men, while 37.1% identified as women. Respondents ranged in age from 19 to 75 with an average age of 38. 51.7% identified as Democrats, 28.7% as Republicans, 19.6% as independent. Participants incorrectly answering any attention-check question had their answers disqualified. This study has a 3% margin of error on a 95% confidence interval.

Please note that survey responses are self-reported and are subject to issues, such as exaggeration, recency bias, and telescoping.

Fair Use Statement
What do you think the female coaching landscape might look like in the near future? If you know someone who might enjoy this read, feel free to send it their way. We just ask that you do so for noncommercial use only and that you provide a link back to the original page so contributors can earn credit for their work.