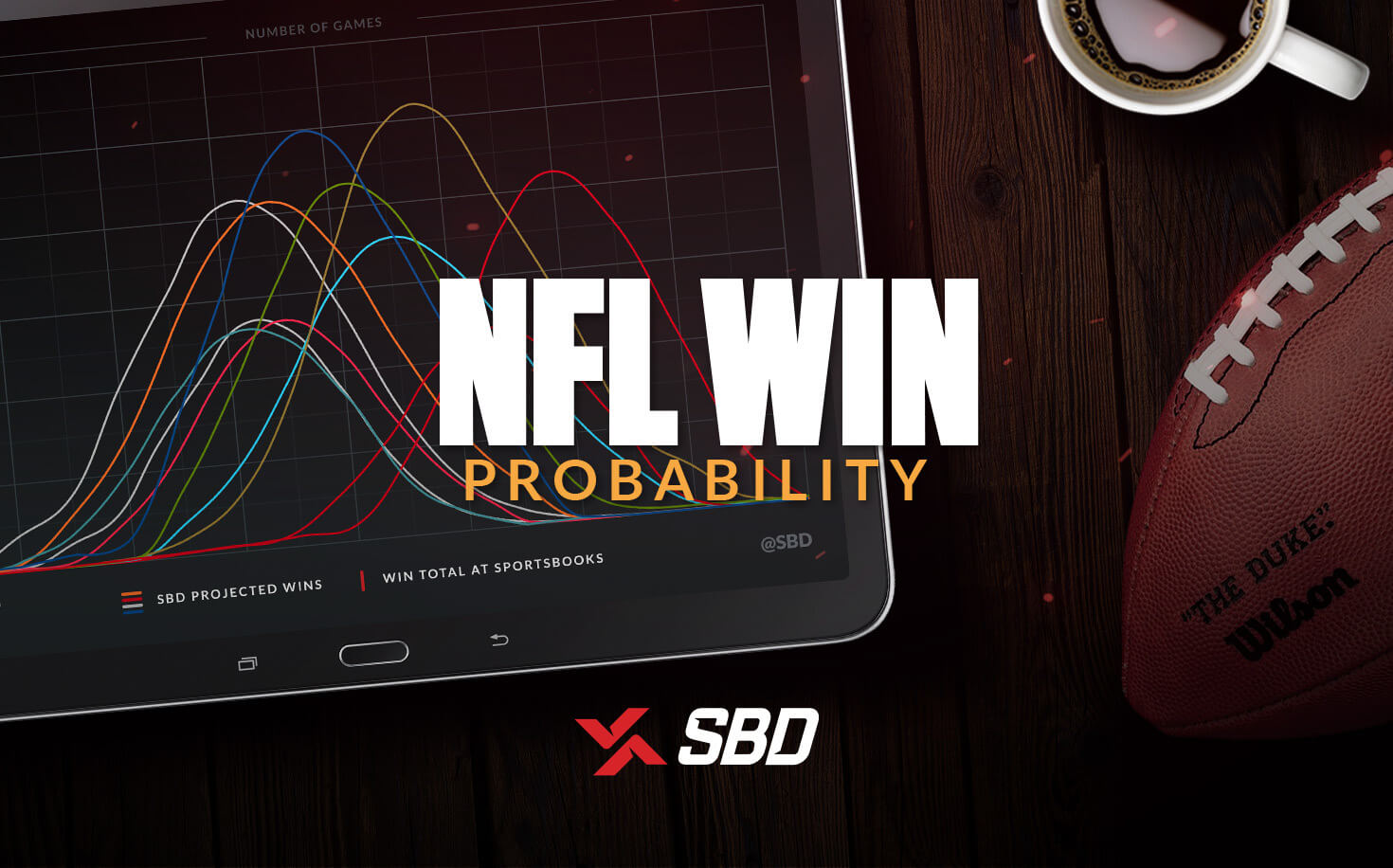 Each spring, sportsbooks give bettors a gift when they release the opening lines for every week of the upcoming NFL season. The gift is not the ability to place a bet on a Week 13 game you think presents value, but rather the pieces of a (complex) puzzle that when put together properly, give you a detailed picture of what sportsbooks are expecting from each team this season.

Using these opening NFL lines, I’ve already put together SBD’s NFL Power Rankings, which is based on an ATS +/- for all teams from Weeks 1-18. I’ve gone one step – or maybe 87 steps – further with these opening spreads in this one, though.

I have used the betting lines to mathematically predict each team’s record for the 2022 NFL season, using a calculation I have dubbed “SBD Win Probabilities”. You’ll find more on the process and specific steps of the SBD Win Probability calculation later in this article. With these mathematical record predictions, I have then highlighted the teams with the best probability to go over or under their respective NFL win totals, as well as some teams who present value to go over or under.

The results of the SBD Win Probability calculation say the Buffalo Bills and Tampa Bay Buccaneers will finish the 2022 NFL season tied for the best record in the league at 11-6. The Bills, however, have a better chance of winning 12 games than the Buccaneers do. Buffalo’s chances of going 12-5 are listed at 19.6%, just being beaten by their 20.3% probability of going 11-6. Tampa Bay only has a 17.8% chance of going 12-5.

With not a ton of large spreads in any of the games this season (says the sportsbooks), you’re seeing a lot of parity in the lookahead at the 2022 NFL season. No team is that heavily favored all season and no team is such big underdogs all year.

My SBD Win Probabilities calculation predicts the Houston Texans will win the fewest games this season, going 5-12 and finishing with one fewer win than the Falcons, Jaguars, Jets, and Seahawks. If true, this would mean the Texans would get the first-overall pick in the 2023 NFL Draft. 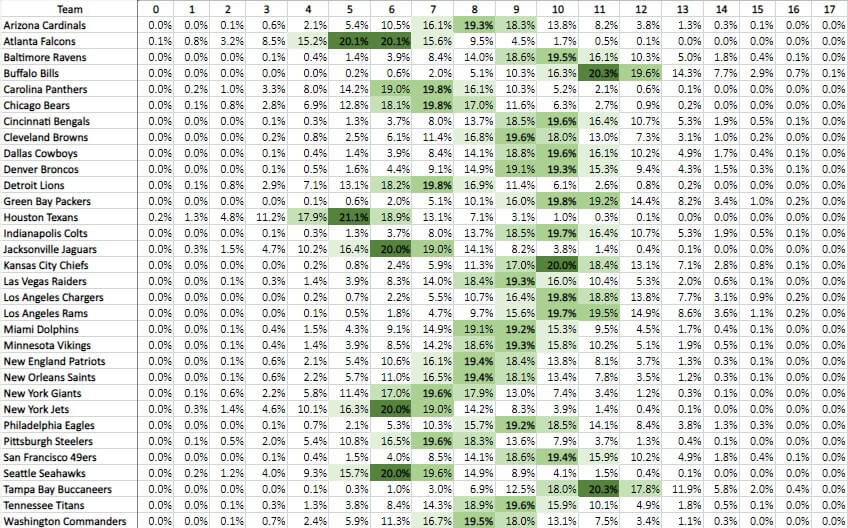 In the image above, you’ll see the chances of each team winning zero through 17 games this season, based off the SBD Win Probabilities calculation. To get the record prediction above, I have just taken the most likely outcome for each team from the calculation.

It’s important to read this for what it is: the teams with the best chances to go over or under their win total. This does not mean they are the best bets to do so. We need to factor in the odds before determining the best bets. We will do this in the next section!

The team with the best chance to go over their win total is the Atlanta Falcons with a 72.2% probability to go over 4.5 wins. There is a 40.2% chance Atlanta wins five or six games this season. Although they have tough out-of-division matchups against the NFC West and AFC North, they do benefit from two games against each of the Panthers and Saints, as well as games against the Bears and Commanders.

The Falcons are not favored (at the moment) in any game this season, but their Week 8 matchup with Carolina and Week 11 clash with Chicago are both listed as picks. They are also a 3.5-point dog or less in five other games this season. Probabilities say Marcus Mariota and company go over 4.5 wins.

Falcons Coach Arthur Smith said doubters of his team need to check initial projections for the success of the iPhone to gauge how he feels about outside expectations. Can he foster similar success with this squad? From Inside Training Camp @nflnetwork pic.twitter.com/hYiqlyAWya

The team with the best probability to go under their win total is the Denver Broncos. Adding Russell Wilson in the offseason has resulted in a lot of hype back in the Mile High City. Apparently a little too much hype according to the SBD Win Probability calculation. The Broncos have a 69.1% chance of going under their win total of 10.5. There is a 38.4% chance Denver wins nine or ten games this season.

The Broncos find themselves as underdogs in four games this season, while they’re listed as a pick in four other games. Denver is only favored by more than four points in three games this season.

It’s no coincidence that the Chiefs are one of the teams most likely to go under their win total this season, as they have the toughest NFL strength of schedule. Two games against each of the Broncos, Chargers, and Raiders, as well as matchups with NFC West teams, the Bills, Bengals, and Buccaneers, makes for a very tough road for Patrick Mahomes and the Chiefs.

Based on the SBD Win Probability calculation, here’s each team’s probability to go over/under their respective win total this season.

You’ll notice the Browns are currently not available. Sportsbooks have taken their win total off the board with Deshaun Watson potentially facing a suspension this season. Admittedly, if Watson is suspended for any significant amount of time, all games involving the Browns would see significant movement in the betting lines. This would certainly damage the accuracy of any team’s SBD Win Probability who plays Cleveland this season. So, please be cautious in betting any of those teams.

Now let’s dive into those best bets I was talking about earlier. (If you are just looking for the bets with the best probability of winning, not caring for the value, then go ahead and bet the teams bolded above.)

Note that I did not calculate a vig-free probability for the odds. If I did that, your edge would be slightly stronger for each of these bets.

You’ll notice a lot of the teams listed in the best bets table above are the same ones from the best probability table. There are a couple newcomers, though. The Bears are the best bet among teams without an incredibly strong probability to go over/under their win total.

The Bills and Packers are the other two teams featured in the best bets that are not showing the strongest probability towards the over or under. This is simply due to the odds sportsbooks are offering on their unders. Green Bay is a really interesting one. The SBD Win Probability calculation says they have a 53.7% chance of going under their 10.5 win total. FanDuel is giving you +135 odds for the Packers to go under, which comes out to an 11.1% edge for the bettor. Before taking this bet, be sure to claim the best FanDuel Sportsbook promo code.

However, you can also go over to PointsBet and take the under on Green Bay’s win total at 11.5. The SBD Win Probability calculation says the Packers have a 72.9% chance of going under 11.5 wins, and you can get this bet at -130 odds. This is a 16.4% edge for the bettor. Don’t sign up without claiming our PointsBet promo code, though.

What Is SBD’s Win Probability Calculation?

As I said earlier, I started with the opening lines for every game of the 2020 NFL season. These are the truest odds you can get your hands on. Money has not influenced them yet and it’s the closest thing you’ll find to the sportsbooks’ true perception of each team – they are still considering the public perception of each team, but they don’t have as good of a read on the public before money comes in.

And while there will be teams who surprise us every season, sportsbooks have a track record of being pretty accurate in how they view teams.

I knew my ATS +/- (or SBD NFL Power Ranking) would help with Super Bowl and playoff futures. But I wasn’t able to find a ton of great win total trends or correlations from that calculation. So I started thinking about what I could do with these spreads to help with win totals.

And then it hit me! I realized I could use these opening lines to poke holes in the 2022 NFL win totals that have been influenced by money and public perception.

Here was my thought process:

After doing that work, I now had the probability for each team to win zero through 17 games this season.

Full disclosure, I see two very minor flaws with this: (a) I did not factor in the probability of a game ending in a tie; and (b) while many of these spreads will be different from what we see at their more traditional opening (a week prior to the game), Week 18’s spreads will likely be much different than what we have now.

But I don’t see either of these having much of an effect on the teams whose SBD Win Prob is way out of line with their win total at sportsbooks – we’ve seen nine ties in the NFL since 2012, which comes out to one per season, and if any of your over/under bets don’t have anything to play for in Week 17, it probably means your bet has already been graded.

We were slightly in the green last year on the teams with the strongest probability to go over/under their win total, going 10-7 to win 0.59 units. (This assumes you bet one unit on each of them.) If you bet the over or under on every single team’s win total, based on their better probability, you would have gone 20-12 and won 4.5 units. 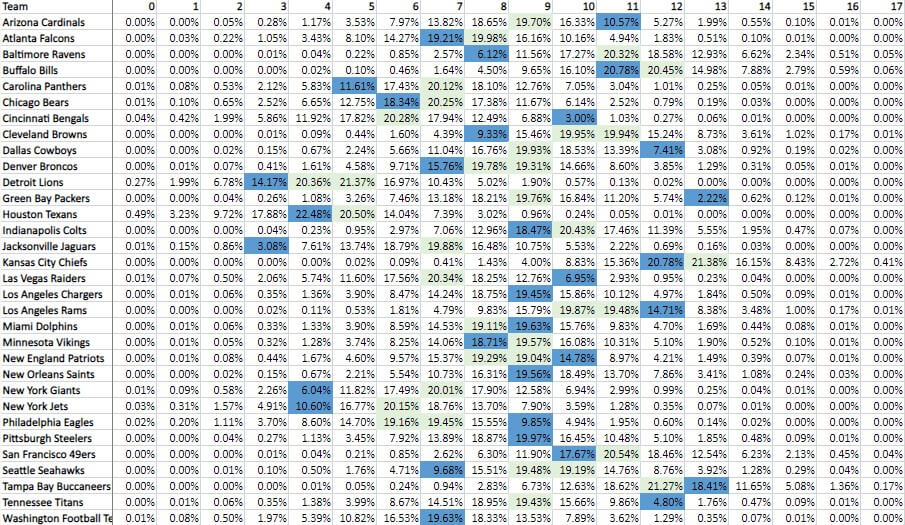 The image above shows the probabilities for each team to win zero through 17 games in the 2021 season (last year). The cells shaded green dictate the team’s most probable number of wins. The cells shaded blue indicate the actual number of games they won. If there is only a blue cell (no green) for any team, that means the SBD Win Probability calculation nailed their record.