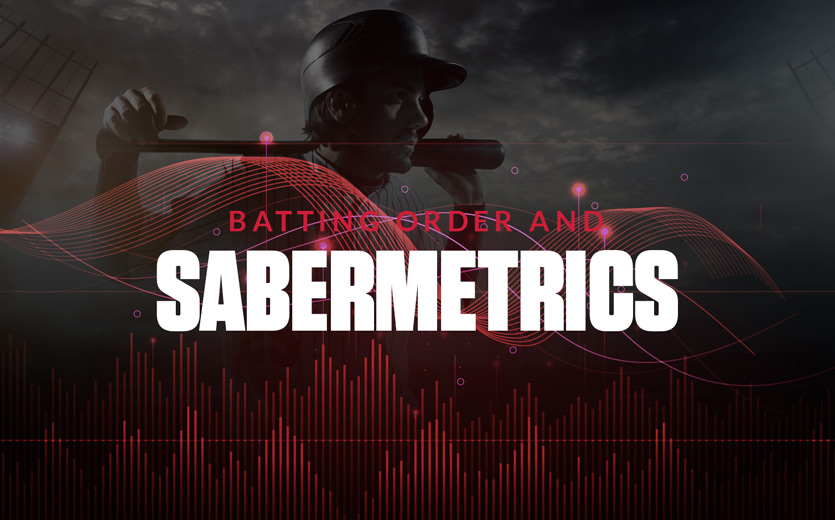 Baseball batting orders and sabermetrics go hand in hand, whether you’re a high school coach attempting to optimize your lineup for a state title, or an MLB bettor looking to see which team has the top-heavier lineup.

This guide reveals how some managers are using sabermetrics to their advantage, and how you can use this information to more effectively handicap your baseball wagers.

After covering a few batting order and baseball stat basics, we’ll evaluate the efficacy of sabermetric-optimized batting orders and teach you how to use them when betting on MLB props and live action.

What Is Batting Order and Why Does It Matter?

Batting order simply refers to the order in which each team’s players go up to bat in a baseball game. It has long been the obsession of managers and fans alike, as batting order affects virtually every offensive element of the game.

Each batter’s place in the order affects two things:

Players with specific skills can provide an extra benefit at certain places in the order. Of course, mitigating the negative impact that untalented hitters (such as nearly all pitchers) can have is also an important part of optimizing an order.

What Are Sabermetrics and What Do They Have to Do with Batting Order?

If you’ve seen the popular film Moneyball, you’re already familiar with the concept of sabermetrics. Sabermetrics rely on empirical data, and sometimes complex mathematical equations, to evaluate the value of baseball players.

They’ve become a major part of management for MLB teams during the last two decades and provide an alternate (and likely more accurate) method of evaluating player talent versus traditional baseball statistics.

Sabermetrics are so interesting and controversial because they often challenge the conventional wisdom in terms of management decisions. Batting order is no exception.

Traditionally, batting orders have been widely optimized according to the following guidelines, with each team making variations as they see fit:

Of course, enough empirical analysis has revealed serious flaws with this approach. Turns out, the two-hole is actually the most important placement in the lineup. The cleanup and number five spots should be occupied by the two next best overall hitters on the team.

Tom Tango, Mitchel Lichtman, and Andy Dolphin used run expectancy to reach this conclusion, evaluating the potential of each position in the order to generate runs. While their overall analysis far exceeds the scope of this article, you can read their book covering the issue (among other interesting sabermetric topics). It’s called The Book.

Using sabermetrics, the following general guidelines are recommended for batting order. Please reference our baseball stat abbreviation glossary if you are not familiar with the metrics included in this table.

There are several ways paying attention to batting orders can help you bet on baseball more successfully.

We’ve just covered the advantages of a batting order based in sabermetric research rather than old-school tradition. Evaluating the extent to which each team has taken a modern, stats-based approach to their order is one way to predict their offensive productivity.

This is particularly true early in the season, when it’s easier to find information about the past performance of individual players rather than simply looking at a team’s success so far this season.

The fact that batting order optimization is such a debate-worthy topic in the first place points out perhaps the most obvious hint of all.

Batting order changes will affect a team’s ability to score. Always look for major shakeups before betting on an MLB event.

There are several specific situations in which a detailed analysis of batting orders can help you gain a leg up on the sportsbook.

But batting orders are also relevant in the decision of whether to bet the first five innings or complete game.

The top three or four batters in the lineup are likely to see one additional at-bat before the end of the fifth inning. If you want to back a team based on the offensive abilities of these few players, you should place a first five inning wager on the game. Top-heavy teams have an advantage in the first five innings alone.

By contrast, teams who have a strong, balanced lineup are likely to benefit from as many plate appearances as possible. Take the full game wager if you also like the players occupying spots five through nine.

Batting order and sabermetrics can be useful when handicapping batter props. They are particularly useful when betting RBI totals.

While it’s difficult to isolate the relationship between batting order position and RBI opportunities from other offensive elements of the game, FanGraphs has attempted to put some hard data behind the question.

Unsurprisingly, batters who are fourth and fifth in the batting order have the most opportunities to bring baserunners home and tally RBIs. So long as the player you’re considering also has excellent power (look at SLG% and ISO to identify power hitters), they are likely to drive in lots of runs in the clean-up spot or when batting fifth.

Should an absolute slugger player suddenly be moved in the order mid-season, you can expect their RBIs to modestly decrease. This is worth keeping in mind as a secondary metric when handicapping RBI over/unders.

The best thing about betting on baseball is the huge amount of statistics you can rely on when researching and preparing your wagers. For more tips on how to make the most of them, check out the rest of the baseball advice in our how to bet on sports series.

Don’t worry if you’re not a stathead. We cover plenty of ways to bet on baseball that don’t require a PhD in statistics to make the most of.

As always, remember to wager responsibly and enjoy the action out there.