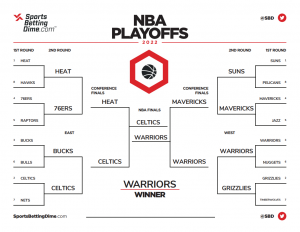 [May 27] Albeit with a half-hearted comeback late in the game from Dallas, Golden State held on in Game 5 at home to advance to their sixth Finals since 2015

[May 16] The Conference Finals are set, with both the Celtics and Warriors opening as heavy favorites to reach the NBA Finals

[May 13] The Heat are the first team in to the conference finals, with a Game 6 blowout win in Philly launching them in to hosting Game 1 next week

Be sure to check the latest NBA playoff odds at your book of choice with just about 10 games remaining in the regular season for most teams.

The Warriors are now favorites in NBA Championship odds as short as +300. The Celtics odds to win the Eastern Conference also shortened to favorites’ position after sweeping the Brooklyn Nets out of the postseason

The 2nd round will begin on Sunday, with the Bucks and Celtics facing off at 1:00pm EST in the NBA Showcase game on ABC.

NBA Standings as of April 11th

Once the seeds are set in stone at season’s end, check back in with SBD to see how to complete NBA Playoff bracket and picks your winners all the way to the NBA Finals!