The 2018 WNBA season tips-off this Friday (May 18th). Are you new to the league? Welcome! A few things to know off the top:

On that note, let’s look at the odds and futures for all of the action that awaits this season.

The Lynx and Sparks, who met in the WNBA Finals for the second straight season, remain the heavy favorites to capture the 2018 title. They both showed their dominance in the semis last year, with Minnesota trouncing Washington 3-0 and LA doing the same to Phoenix.

LA then pushed Minnesota to the limit in the best-of-five finals, losing a heartbreaking Game 5 in Minneapolis that was closer than the 85-76 final score suggests.

The Liberty should still be the class of the Eastern Conference, but after an earlier-than-expected exit at the hands of the Mystic in 2017, it’s now been 16 years since they went to the finals.

That’s a big jump for the Aces, admittedly, but there is ample reason for optimism, which is discussed in more detail below.

Time for the Raptors to Blow it Up? Odds on DeRozan and Lowry's Future
Read More

All in all, this year should see a little more parity. The Lynx and Sparks certainly have the talent to run over opponents on a nightly basis, but mustering the motivation to do so can be a big hurdle.

As the past results show, the same names keep popping up in the MVP voting. Moore (2014 MVP) was overshadowed by teammate Sylvia Fowles last year, but she remains the best player in the world.

If you want to cheer for a dark-horse, look no further than Jonquel Jones, who busted out in just her second season in the league. If she takes similar strides in her third year, she’ll not only help the Sun shine brighter than ever, she’ll get a ton of attention from MVP voters.

If you want to cheer for a dark-horse, look no further than [Connecticut’s] Jonquel Jones, who busted out in just her second season in the league.

A’ja Wilson is almost an odds-on favorite to keep the trend going. Here’s why:

Odds to Finish with Worst Record in the League

With the franchise relocating from San Antonio to Vegas, Bill Laimbeer installed as head coach, and first-overall pick A’ja Wilson ready to take the league by storm, the newly-minted Las Vegas Aces should find their way out of the cellar, where San Antonio resided the last three seasons.

The Aces’ gain is the Fever’s misfortune, though Kelsey Mitchell was certainly a great consolation prize in the draft and provides hope for Indiana’s long-term future.

¹The Lynx hit triple digits six times last year, alone, including going off for 111 points (Aug. 18 vs Indiana) and 110 points (Sep. 1 vs Chicago) late in the season.

²Griner has 13 in-game dunks in her career. The rest of the league has seven, according to the WNBA record-keepers. 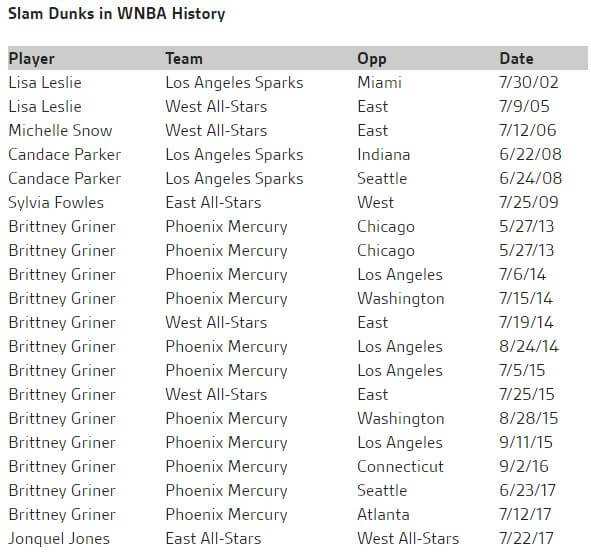 All the dunks in WNBA history, from WNBA.com.