It’s just a few more days until the biggest UFC event of the year, and likely the most lucrative night in UFC history. Conor McGregor makes his long-awaited comeback to the UFC, and he’s diving right back into the deep end. Welcoming him into the octagon is lightweight champ Khabib Nurmagomedov, an undefeated fighter who hasn’t lost a single round in his MMA career.

How have the lines moved since the fight was announced, and what are the value picks when it comes to the props? Let’s get straight to it.

The betting lines opened with Khabib as the clear favorite at -205, and while the champ is still favored, the line has shifted towards McGregor in the weeks leading up to the fight. Like with every Conor fight, it’s likely we’ll see late money pouring in from casual fans. 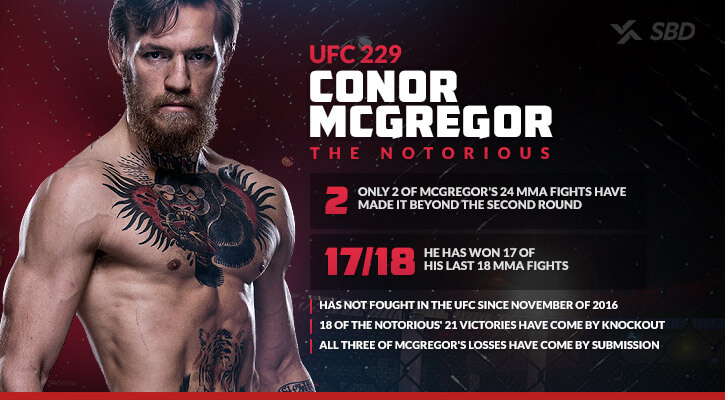 If we strip away all the theatrics, the calculus of this fight remains simple and unchanged. McGregor is the greatest striker at lightweight; Khabib is the greatest grappler. McGregor operates in bursts and does his best work in the opening rounds; Khabib is a steady metronome of pain.

McGregor will want to keep the fight upright and utilize his striking at a distance, while Khabib will march forward in search of a takedown. While the fight is young, McGregor will be the more threatening fighter and the man more capable of bringing the fight to an abrupt end. If the fight bleeds into the championship rounds, McGregor will likely fade and Khabib will come to life. That’s the CliffsNotes breakdown of the fight.

Neither fighter is the complete package. Khabib showcased his striking against Al Iaquinta and it was nothing special. He lacked the speed and timing that you usually see in elite-level strikers, and his power was nothing to marvel at. McGregor has demonstrated a descent takedown defense at times, but his grappling and ground game is definitely his Achilles heel. We saw a diminutive Chad Mendes successfully execute multiple takedowns on him and Nate Diaz was able to flip him on his back and choke him out.

I picked Nurmagomedov to win before the fight was officially announced and I’m sticking with it. McGregor has amazing timing and is able to put away his opponents in an instant, especially in the first two rounds. But I have a feeling that his power won’t be as exceptional at lightweight as it was at featherweight. 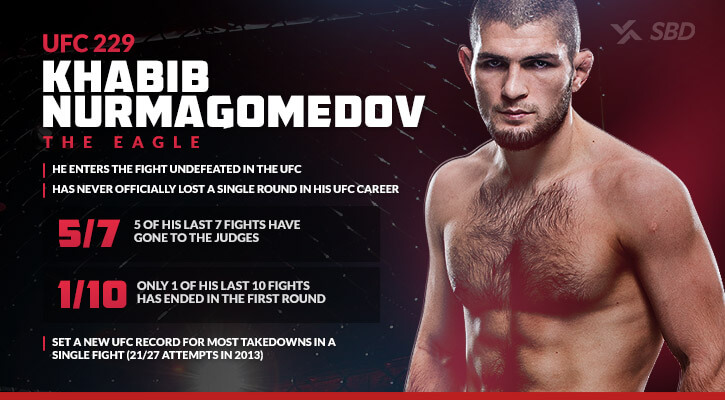 Nate Diaz was knocked down a few times when they fought at 170 lbs, but was able to recover. And Eddie Alvarez had a particularly poor showing when they fought, which marks McGregor’s only UFC fight at 155.

Khabib Nurmagomedov vs Conor McGregor Tale of the Tape

There’s value in Nurmagomedov at -155, but perhaps wait until closer to the fight before placing a bet. McGregor fans will probably continue to drive the line down until fight night.

Don’t forget to check out our UFC 229 printable props sheet to make some predictions of your own.

It’s interesting to compare McGregor’s odds of winning outright (+125) to his odds of winning by TKO/KO (+165). Bettors and bookmakers seem to believe that if McGregor wins, it’ll almost certainly be by stoppage. That makes a lot of sense. Khabib hasn’t lost a single round in his professional MMA career and McGregor has won all but two of his fights via knockout before the end of the second round.

When it comes to Khabib, the shortest odds are on a submission victory (+205). The undefeated Dagestani racked up a ton of submission victories during his early years in the Russian circuits, but only two of his 10 UFC wins have come via taps. However, all three of McGregor’s losses have been by submission. So that explains the relatively short odds.

Bettors and bookmakers seem to believe that if McGregor wins, it’ll almost certainly be by stoppage.

There’s value in picking Khabib by Decision (+400). The champ is good at mauling his opponents and completely dominating fights, but he doesn’t always find the finishing touch. Edson Barboza never stood a chance and was obliterated for three rounds, but he managed to run down the clock and make it to the end. Al Iaquinta found little to no success over five rounds, but he still took the fight to the judges. Same goes for Rafael dos Anjos. McGregor could meet a similar fate.

All eyes are on whether the fight finishes round two. It’s when the pendulum will swing from McGregor’s favor to Khabib, and it’s when the chances of a stoppage begins to drop. There’s good value in picking the fight to go the distance (+285), and also to complete the third (+145) and fourth (+205).

Fight fans want to see a spectacular stoppage, but we could be in for a lengthy war of attrition.

Don Aguero is a man of many talents, writing about nearly anything you can put odds to. Don has been writing for SportsBettingDime since 2015, covering sports, entertainment and politics. You name it, he's covered it! He is also a steadfast West Ham fan, and has learned to embrace that suffering.

Don Aguero is a man of many talents, writing about nearly anything you can put odds to. Don has been writing for SportsBettingDime since 2015, covering sports, entertainment and politics. You name it, he's covered it! He is also a steadfast West Ham fan, and has learned to embrace that suffering.