Get in the game with our expert NBA betting advice. We’ve rounded up the latest trends, analytics, and insights to help you make the most of your moneyline, ATS, and over/under bets. Today we focus on the Suns vs Spurs from the AT&T Center in San Antonio (7:30 PM ET).

Tonight’s tip-off between the Spurs and Suns is a classic case of experience versus youth. In one corner, we have the crusty old Spurs, who have the second-oldest roster in the NBA and have spent so much time together that they unconsciously mimic one another’s every move.

In the other corner, we have the Suns, who have the youngest roster in the league, including three regular rotation players who aren’t even old enough to drink (legally). Having a stable full of young players is good in theory, but it can be a nightmare when it comes to executing against savvier squads. Phoenix’s inexperience has been glaringly obvious this season as the Suns have lost eight games by three points or less and have been committing an unsightly 15.9 turnovers per game.

Those kinds of mental lapses won’t cut it against the Spurs, who are masters at exploiting other teams’ weaknesses. San Antonio averages 15.7 points per game off of turnovers and consistently finds ways to make opponents beat themselves. While every other franchise is playing checkers, Gregg Popovich is playing chess.

Phoenix won’t win tonight, but if they pay attention, they may learn a trick or two to help hasten their development. 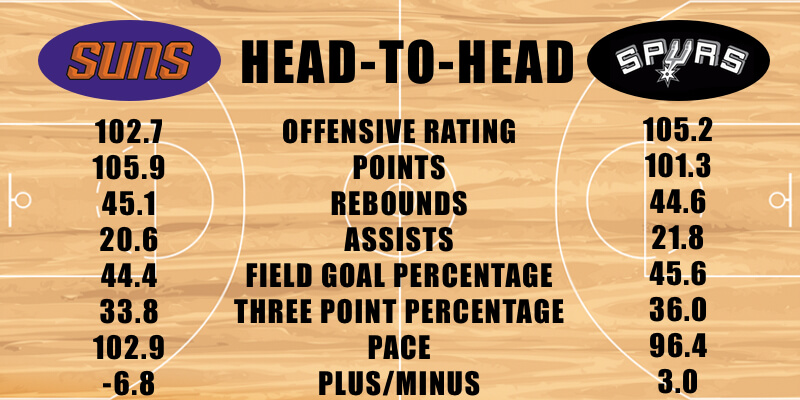 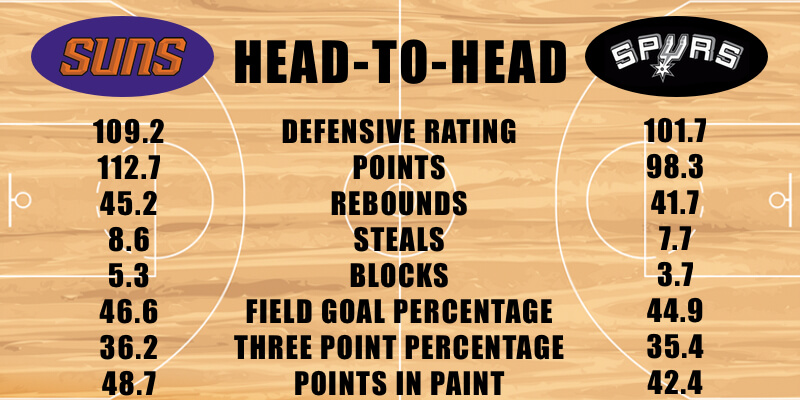 This is the third time the Spurs and Suns have met this season. San Antonio overcame a slow start to defeat Phoenix 112-95 during their first meeting on November 5th. LaMarcus Aldridge led the way with 21 points on 9-13 shooting and six other Spurs finished in double figures. T.J. Warren paced the Suns with 17 points, but finished with a -22 net rating as Phoenix’s starting unit was thoroughly outplayed from start to finish.

The Suns fell to the Spurs again on December 9th, losing 104-101 in Phoenix. Point guard Mike James led the Suns with 24 points off the bench and kept the game within reach until the final 21 seconds, when sophomore shooting guard Bryn Forbes sealed the win for San Antonio with a deep three. The game was considerably closer than it should have been as the Spurs were playing without Kawhi Leonard, Pau Gasol, Manu Ginobili, Danny Green, and Kyle Anderson.

SUNS: The Suns had a mile-high meltdown in Denver on Wednesday night, losing 134-111 to the Nuggets. Marquese Chriss and Greg Monroe had 16 points a piece for Phoenix, but offered little resistance on defense, as Denver shot 62-percent from the floor and 44-percent from behind the arc.

SPURS: Joel Embiid had 21 points, 11 rebounds, and four blocks as Philadelphia defeated San Antonio 112-106 on Wednesday night. Patty Mills had 26 points for the undermanned Spurs, who sat Ginobili, Green, Leonard, and Tony Parker on the second night of back-to-back games. San Antonio was outrebounded 55-50 and uncharacteristically coughed up the ball 16 times.

Alan Williams is recovering from surgery to repair a torn meniscus in his right knee. Brandon Knight is rehabbing his torn ACL and is expected to miss the entirety of the 2017-18 season. Jared Dudley has missed the last three games due to illness and is considered questionable for tonight.

Rudy Gay is on the shelf with right-heel bursitis and is not expected back until January 13th. Green missed Wednesday night’s game against the Sixers with a groin injury and is considered day-to-day. Joffrey Lauvergne has been out since October 23rd with a sprained right ankle and will be a game-time decision.

We could throw a million different stats at you to illustrate the superiority of the Spurs over the Suns, but there are really only two numbers you need to know: San Antonio is second in the NBA in defensive rating at 101.4, and Phoenix is 27th in offensive rating at 102.5. Those two numbers may sound deceptively close, but the disparity in the rankings is so wide that Alan Williams could comfortably pass between them.

The Suns struggle to score efficiently despite playing at the third-fastest pace in the league, while the Spurs excel at getting stops by playing superb help defense and hustling back in transition. Although Leonard is their only true stand-out defender, San Antonio communicates so well on D that few teams ever get a chance to comfortably execute their offense. That’s bad new for the Suns, who struggle to achieve any offensive flow at the best of times.

Take the Spurs and watch one of the league’s smartest and best-coached teams put on a clinic at both ends of the court. 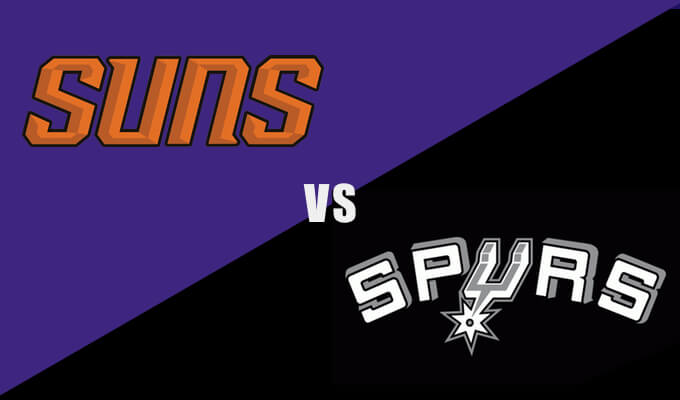 Despite the discrepancy in talent between the Spurs and the Suns, the 12-point spread available seems overly generous, especially when you consider the way Popovich carefully monitors the minutes of his stars. If San Antonio takes control of the game early, as we suspect they will, Pop may choose to sit his starting five for the entirety of the second half. He could even send players to the pine just for the hell of it, as he did on Wednesday night when he gave Pau Gasol the hook after just 13 minutes. Unlike many of his less-tenured peers, Popovich is coaching for the playoffs and will gladly accept a single-digit win now if it allows him to keep his regulars fresh for May and June.

The Spurs and Suns combined to average 206 points during their first two meetings, but you can throw those totals out the window as San Antonio was without the services of several of its top players. Parker, Leonard, and Ginobili were unavailable for the first game in November, and Leonard, Gasol, Ginobili, Green, and Anderson were all unavailable for the second showdown a month later. When the Spurs are at full strength, as they were against the Nets on December 26th, they’re capable of scoring at will and smothering their opponents. The question, as always, is who will play? Will Popovich give some of his stars the night off, or will he allow them to work up a sweat knowing they had the evening off on Thursday and won’t play again until Sunday? We think it will be the latter, which is why we’re cautiously taking the over for tonight’s game.

Suns vs Spurs is just one of ten games on tap on Friday night. Here are our other nine straight up picks. 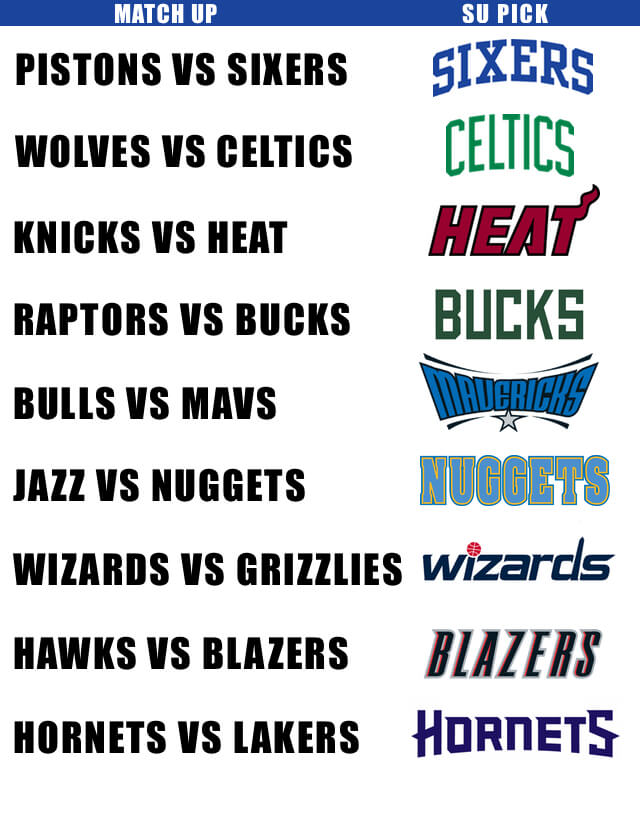