It’s amazing what a little winning streak can do for a team’s mood. Oklahoma City (27-20, 17-7 home) appears loose and relaxed – perhaps for the first time all season — after winning its fifth consecutive game. Russell Westbrook is smiling again, Paul George finally looks comfortable in Billy Donovan’s read-and-react offense, and Carmelo Anthony has (for now) embraced his role as the team’s third option.

Anthony’s deference to his younger teammates has been critical to the team’s recent turnaround, as it’s led to significantly better ball movement and freed up Westbrook to go into beast mode without worrying about how his usage rate may affect the performance – and feelings – of those around him. The Thunder are at their best when “Brodie” attacks the rim at a million miles an hour while his teammates spread the court. It took a while to figure out, but OKC is becoming the kind of super-team that can challenge Houston and Golden State.

The outlook is considerably less rosy in Washington (26-21, 11-12 road), where the Wizards have dropped three of their last four games and are still reeling from an explosive players-only meeting that did far more damage than good. Speaking to the press afterwards, John Wall acknowledged that the pow-wow took its toll on morale. “A couple guys took it the negative way and it hurt our team,” he admitted. “Instead of taking it in a positive way like we did in the past and using it to build our team up, it kind of set us back a little bit.”

No one knows precisely what was discussed behind closed doors, but it probably had something to do with Washington’s woefully inconsistent effort against sub .500 teams. Wall and fellow All-Star Bradley Beal have both owned up to the fact that the Wizards are far too selfish against lesser competition and “play for stats” rather than playing to win.

The good news for Washington is that they’ll face a playoff-bound team tonight. It will be fascinating to see if they rise to the occasion or continue their downward spiral towards mediocrity. 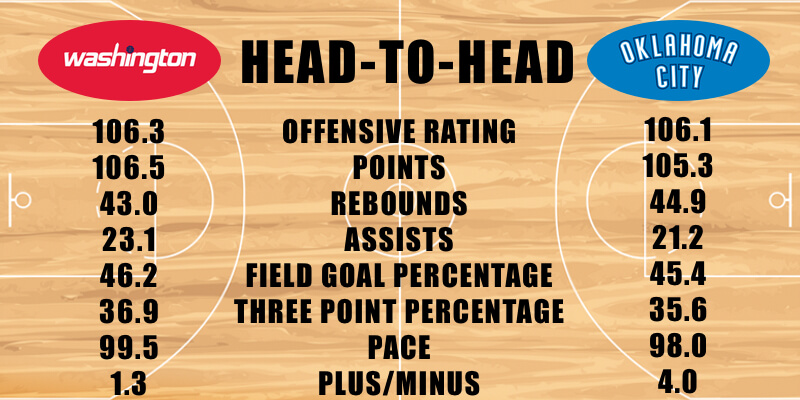 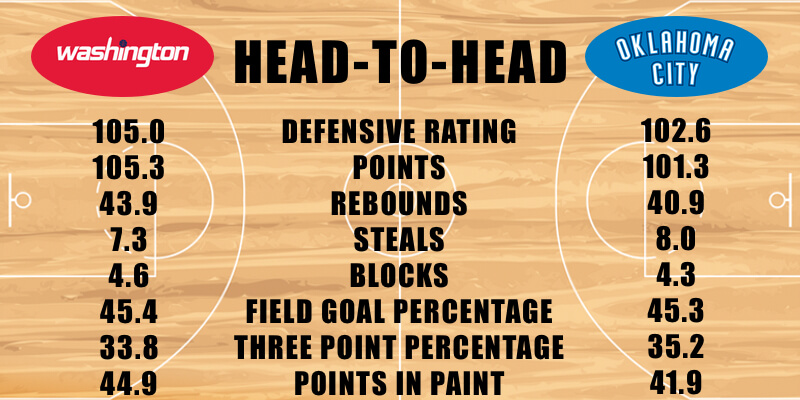 This is the first meeting of the season between Washington and Oklahoma City. The two teams split their home-and-home last season, with the Wizards prevailing in overtime to win the first game, 126-115. OKC got a measure of revenge three months later when they blew out Washington 120-98 at Capital One Arena.

WIZARDS: Washington turned in one of its ugliest performances of the season on Monday night, losing to Dallas 98-75. Beal scored 18 and Wall had 11, but they were the only Wizards to finish in double figures as the team shot just 30-percent from the field and 21-percent from behind the arc. “We couldn’t make a wide-open shot, couldn’t make a layup, and we couldn’t even make non-contested free throws,” head coach Scott Brooks lamented afterwards. “It was one of those nights.”

THUNDER: Oklahoma City overcame a 15-point deficit to beat Brooklyn 109-108 on Tuesday night. Westbrook led all scorers with 32 points and made a contested layup with 3.3 seconds remaining to ice the win. The Thunder shot 42.6-percent from the floor and committed just four turnovers in the game.

Porter left Monday’s game against the Mavericks with a right hip strain and did not return. He is questionable for tonight.

The one advantage that Washington has over most teams is its All-Star backcourt of Wall and Beal. The Wizards’ dynamic duo average 42.9 points, 12.9 assists, and 7.9 rebounds per game and have the speed and touch to give most teams fits.

Most teams, that is, except the Thunder. OKC is uniquely equipped to slow down Wall and Beal with its own dynamic duo of Westbrook and George, both of whom rank in the top five in the NBA in steals and are exceptional ball hounds. Brodie and PG13 have the size and defensive chops to prevent their Washington counterparts from getting to their favorite spots and should be able to put the clamps on the Wizards’ transition game.

Washington will also have to contend with defensive specialist Andre Roberson, and big-bodied banger Steven Adams, who is once again among the league leaders in rebounds, blocks, and bone-crushing box outs.

Any way you slice it, it’s shaping up to be a long – and exhausting — night for the Wizards. 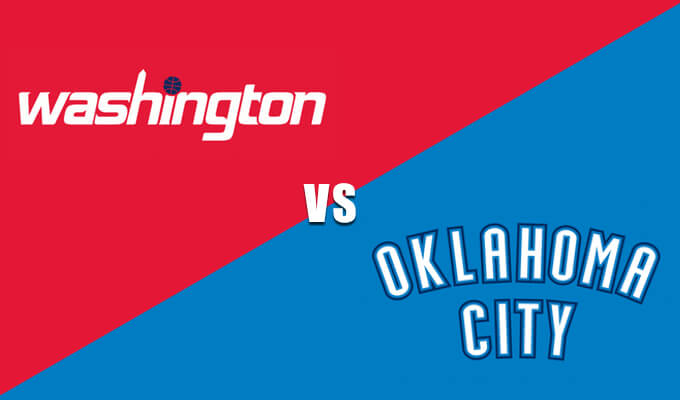 Oklahoma has been the second-worst team in the league against the spread this season, but the five-point margin available at sportsbooks feels like a reasonably safe bet given their recent performance. The Thunder have outscored opponents by 15 points per game during their five-game winning streak and match-up particularly well against the struggling Wizards. Take OKC to cover the spread and take advantage of Washington while they’re still in disarray.

That 213.5-point total isn’t high for most NBA games, but it feels positively insurmountable for the Wizards, who managed just 75 points in their last outing against the Mavs and have failed to reach the century mark twice in their last four games. They’ll also be facing one of the NBA’s stingiest defenses tonight at Chesapeake Energy Arena. OKC ranks third in the league in defensive rating behind Boston and San Antonio, and does an outstanding job of hustling back on defense and limiting points off of turnovers.

The Thunder should come close to their season average of 105.3 points tonight and will apply enough defensive pressure to keep this game comfortably under 213 points.

Wizards vs Thunder is just one of four games on tap on Thursday night. Here are our other three straight up picks.