The mid-major conference tournaments always have an extra kick to them, because even the teams at the very top of the seeding are playing for their NCAA Tournament livelihood.

In this year’s Ohio Valley Conference Tournament from March 4-7, those two squads will be Belmont and Murray State, but they’ll be navigating a field of teams with March Madness dreams of their own. 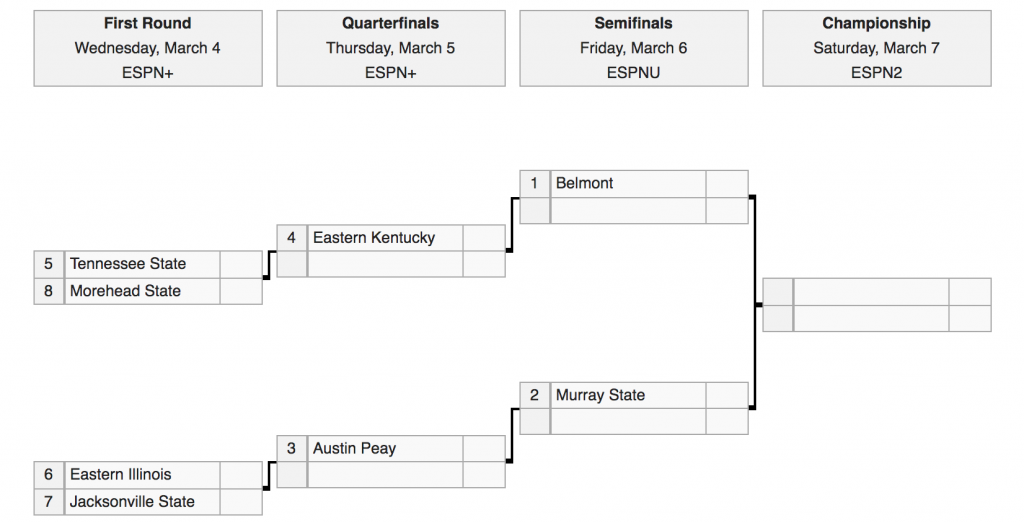 Belmont the Team to Beat

At -145, it is Belmont who holds the top spot in the Ohio Valley Conference Tournament odds, partially because they’re the hottest team in the field. They finished with a 24-7 record, but it was the ten straight victories to close the season that was truly impressive.

Since January 2nd, this team only has two losses. Both defeats come from two of the top three teams in these odds.

While the Bruins are still a long shot in the 2020 National Championship Odds, and not even offered currently at some sportsbooks, they’re definitely the squad to beat in this conference tournament.

Chalk In the Ohio Valley?

A look at the odds shows a distinct drop from the third team to the fourth team. Austin Peay’s +775 odds are starkly different than Tennessee State’s +3000 just below the Governors. The question is, can someone from outside the top three take the title?

The Racers and Bruins don’t even have to play until the semifinals. Just two victories stand between those two squads and a conference title. For Austin Peay, they’re off until the quarterfinals, in which they’ll play the winner of sixth-seed Eastern Illinois and seventh-seed Jacksonville State.

Smaller conference tournaments, simply because fewer games are played, leave far less room for chaos to occur. The top three favorites already make up 50% of the semifinals field, and if the Governors can hold down either of the lower seeds they’ll meet on Thursday, that percentage will move to 75%. Between Belmont, Murray State, and Austin Peay, it’s likely one of the top three is going to lock up a spot in the big dance later this month.

As mentioned prior, Belmont is the favorite because of this group, they are unquestionably the hottest team coming into this tournament. Both Murray State and Austin Peay compiled solid records with 20-plus wins, but they lost a combined seven of their last 20 games to wrap up the regular season.

Here are the probabilities for the OVC tournament, where top-seeded Belmont is the favorite. (at Evansville. March 4-7). #log5 pic.twitter.com/uAN5CfiSkv

However, when it comes to value, it’s actually the Governors that offer the highest amount. They have +775 odds, the lowest of the top three, but they have the best player. Austin Peay’s Terry Taylor averages 21.4 points and 10.8 rebounds per game, and he contributes at least a block, assist, and steal per game as well.

With the best player in the tournament, there is a clear path to victory for Peay. This field may not produce extreme March chaos, but this three-seed could absolutely catch one of the two squads above it.

With four years as radio host with The Ticket Sports Network and various written contributions to publications such as Fansided, Southbound and Down, and Last Word on Sports, Jake Mitchell comes to SBD with NFL, NBA, NCAAM, NCAAF and MMA know-how you can count on.

With four years as radio host with The Ticket Sports Network and various written contributions to publications such as Fansided, Southbound and Down, and Last Word on Sports, Jake Mitchell comes to SBD with NFL, NBA, NCAAM, NCAAF and MMA know-how you can count on.