It’s official. The NHL is adding their 32nd franchise to the lifeblood of the Pacific Northwest Corridor, Seattle. The coming NHL team will be the first winter-sport capable pro sports franchise since the city lost the Sonics to Oklahoma City in 2008.

Seattle still hasn’t announced a team name, and of course, that means we don’t know what to expect for uniforms. Seattle’s entire brand and look remains up in the air.

Will they take an ironic, satirical title fit for the age of meme warfare a la the Vegas Golden Knights, or international superstar Gritty? Or will they adopt a more traditional path that pays tribute to the Pacific Northwest?

We’re not inside the Mad Men style boardroom meetings that are likely being held to decide this matter, but that won’t stop us from teaming up with @Ferry_Designs to design some of our favorite speculative options for Seattle’s first NHL Franchise.

The Nuclear Hipster Option That Will Piss Everyone Off – The Seattle Grunge! 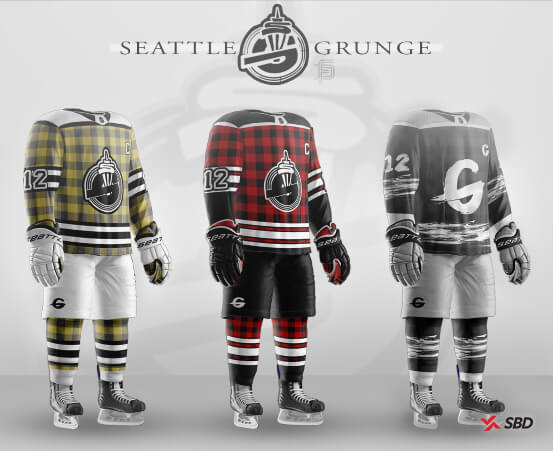 Seattle is steeped in rich musical history, with larger than life super acts in Jimi Hendrix, Pearl Jam, the Foo Fighters, and countless others hailing from Seattle. Perhaps most famous of them all is the eternally beloved father of grunge, Kurt Cobain, whose musical and stylistic impact is still felt today.

Regardless of how many Sealettites still revere Cobain and his legacy, if Seattle’s franchise gets named The Seattle Grunge, you know that they’ve gone all the way to the left with it.

Not only would translating the grunge aesthetic be inordinately challenging to do when you’re limited to the athletic and technical precision required of a hockey jersey and its logo, but it’s hard to imagine a hockey franchise co-opting an ethos that was expressly anti-corporate.

I wouldn’t bet on it. Too far for an old boys club.

The ‘How is it Not Already Taken?’ Option – The Cougars 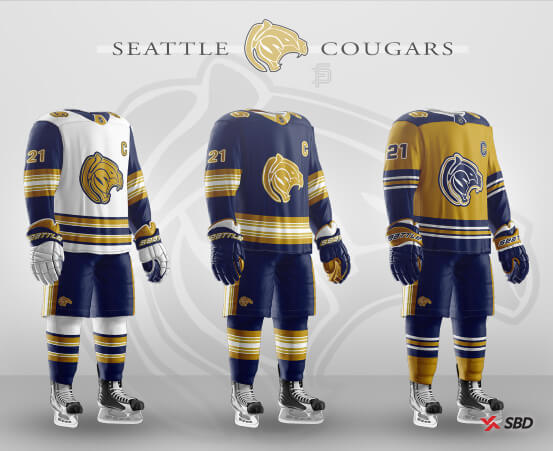 I mean, I guess it’s possible that Seattle’s team is named the Cougars, but like, come on. In 2018, the most you can muster is a name that probably wasn’t even that original pre-Pearl Harbor? I can’t see Seattle opting for something this safe, this tired, and this unexciting.

Nevertheless, cougars are definitely spooky and make for interesting graphic design. However, we’d hope Seattle’s creative department can pack a bit heavier of a punch.

It’s no secret Seattle’s ownership trademarked 13 potential names for their team last winter, and we’d be foolish if we suggested that their name was more likely than not to be drawn from this pool. However, it doesn’t necessarily mean it’ll be one of these, considering the Golden Knights only owned the trademark on their name over two years after their inception.

The Regional Options – The Evergreens and Emeralds 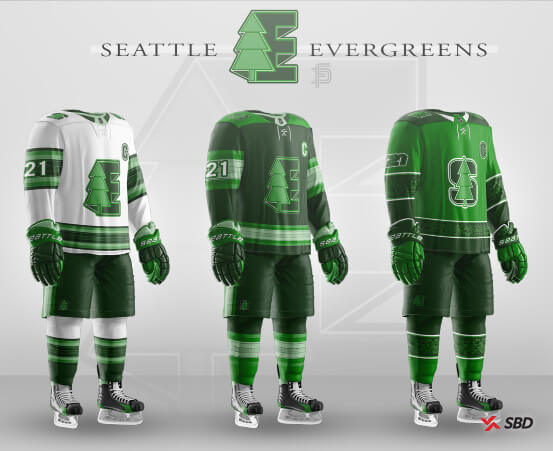 The Seattle Evergreens seems to be a strong contender. If they landed on a tree, they’d join the Maple Leafs, Lightning, Avalanche, Hurricanes, among the NHL’s franchises named after non-sentient phenomenon. Perhaps the Devils too, depending on your metaphysical subscriptions.

Logos based on the geography of a city are always popular, and with Seattle centrally located within the lushness of the Pacific Northwest rainforest, there’s a lot of natural symbols to choose from.

Still, trees are known for staying in one place, and as a hockey player, that’s the kind of thing that’ll land you in the doghouse in a hurry. With that in mind, the Evergreens (as a brand) might be challenging for a PR team to finesse an interesting spin on. 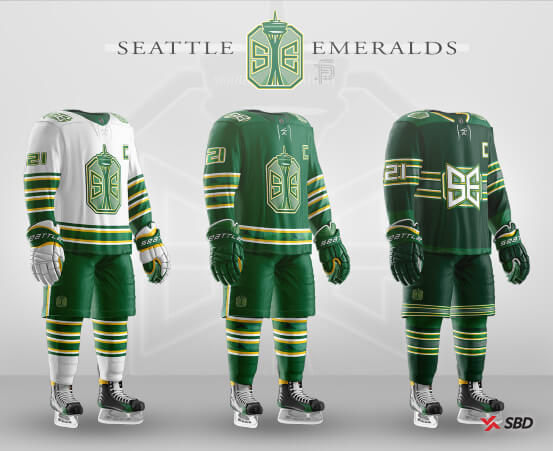 Of these, I’d say Emeralds is the most likely option. Its Seattle’s official nickname, it’s inoffensive, and honestly, stands apart from the pack as being original. Plus, they’d have the esteemed honor of being the second NHL franchise with obvious ties to a children’s movie, albeit a classic made by MGM and not a cheesy Disney franchise.

“The Seattle Emeralds” isn’t as juicy and campy as we’d perhaps like, sure, but also not totally boring.

Side note: remember when the Golden Knights were almost called the Sand Knights? Yikes. Sometimes the tamest option, is, in fact, a good one. The Emeralds is a name that seems the least likely to yield to whatever’s in vogue, so it’s got that working for it.

What’s It Gonna Be?

Seattle’s decision on their team name will likely come in the spring, as they try to drum up excitement as the team. After that is likely their General Manager and Coaching hires, followed by their expansion selections, and then, of course, the on-ice product.

With so many directions the team name could go, it’s difficult to know what jersey (and name) we’ll have when the 2020-2021 season rolls around. As it stands, the Seattle Totems are the favorites according to oddsmakers, but here’s hoping that Seattle’s execs surprise us with something fresh.

The Golden Knights had a bold, original vision for their brand (yes, including the name) and their originality has been rewarded in spades. It’s hard to imagine Seattle’s ownership not taking the lesson from Vegas. Will Seattle’s still nameless franchise be as exciting and successful as their expansion brethren in Nevada? It’s too early to say, but we’ll promise you one thing. As soon as Seattle’s got a roster, we’ll be following the odds.