RB Leipzig are currently second in the Bundesliga, just one point behind the leaders, Borussia Monchengladbach. As a result, their odds have shortened from an average of +875 last month on November 4 to +500 today.

So, as the league’s current highest-scorers, are Leipzig a good bet to win their first title? Or with BVB only five points adrift, are they offering value, or will Bayern still come through? Let’s take a look,

No Two-Horse Race This Time Around

Bundesliga odds still have Bayern as odds-on favorites but this season’s German league has a different look and feel to it. The usual routine is for Bayern and BVB to gradually move away from the pack and for it to develop into a two-horse race that the Bavarians invariably go on and win.

This time around, neither Bayern or BVB are even in the top three and there are just eight points separating the top nine teams. 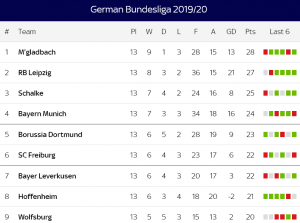 While it’s Monchengladbach who heads the table with an impressive nine wins from their 13 games so far, there is no doubting which team has been on fire in front of goal. RB Leipzig, who are just a single point behind the leaders, have already racked up 36 goals at an average of almost three a game. Equally worthy of note is that the team also happens to have the second-best ‘goals-against’ column in the division.

This Leipzig team is a contender and has also enjoyed a good campaign in the group stages of the UEFA Champions League. They don’t look like a team about to fade away and everything points to them being in the shake-up for the Bundesliga title. In Timo Werner, they have that priceless commodity – a prolific goalscorer.

Monchengladbach can’t be discounted of course. 13 games into the season may not be a perfect guide to a team’s longevity at the top of the table but it shows they are in a good place and they clearly have momentum – another priceless quality. They have, however, had a favorable run of fixtures and have yet to face Bayern or Leipzig. At 20/1 they’re worth a speculative bet, but I’m not sure they have enough in the tank to go all the way.

Bayern and BVB can’t be ignored as both have those invaluable qualities of class and quality. Both have had a tough Champions League schedule to contend with and have advanced through to the knockout phase in February. They are only four and five points off the top of the table respectively, and so have ample time and games ahead of them to make a charge for the title.

Of the two, BVB’s 8/1 offers infinitely better value and is well worth considering.

Schalke 04 are also well in the mix and having lost just twice in their 13 games, they have a defense equipped to earn them a Champions League spot for next season. To have conceded just 16 goals so far is exceptional and while they may not be prolific scorers – 24 goals so far – they look well placed to maintain pressure on those at the top of the table.