9 NFL Betting Strategies for Your Best Football Season Yet 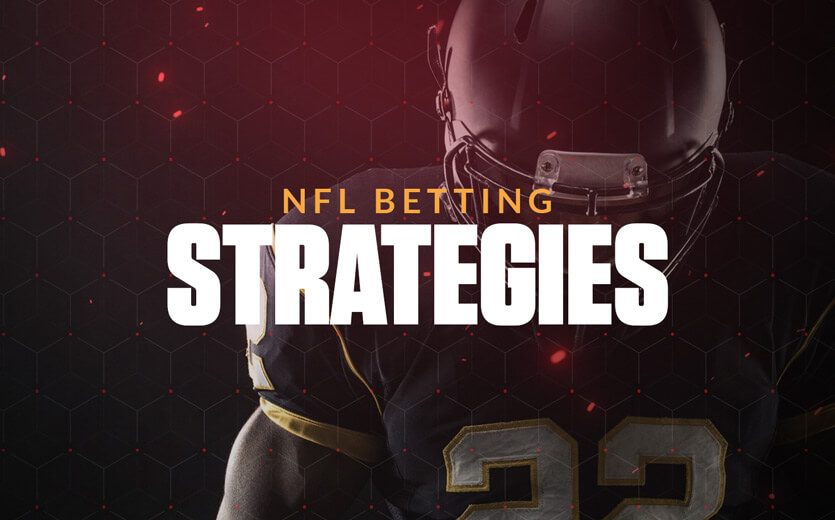 Betting on the NFL isn’t necessarily easy, but making smarter bets is always possible for those motivated to learn a new strategy. Whether you’re a pro football betting beginner or seasoned vet, having a strong betting system in place is always important to have in the regular season and playoffs.

We wish we could tell you we had a magic football betting tip for how to bet on football and always win. There is no singular best way to bet on the NFL (or other leagues like the NBA, NHL, and MLB either for that matter) but we can help you develop a profitable football betting strategy with simple tips to win football wagers whether you’re spread betting or simply placing moneyline bets.

If you want to know how to make money betting on football games, read on! We’ll provide suggestions for how to make winning NFL picks so you can decide the best football betting strategy for yourself.

1. Bet With Your Head, Not Your Heart

It may sound obvious but avoiding emotion when wagering remains a challenge for many gamblers. We all have our personal biases. Whether it’s a favorite team or one we despise, putting aside these preferences in favor of a sound sports betting strategy isn’t easy.

But here’s the thing: becoming more objective towards NFL betting online is literally the easiest way to make smarter bets. It doesn’t require a detailed strategy on mathematical analysis, it just requires common sense. Keep an eye on the best lines and best odds avoid getting sucked into a rabbit hole of favoritism.

Cheering on your favorite team (at least) 16 times per year is a lot of fun but losing money in the process is not. To become a smarter sports bettor and find an edge on the bookmakers, be aware of your biases and try to avoid decisions based solely on favoritism. Don’t solely bet on the Baltimore Ravens or Kansas City Chiefs because you’re a big fan and they’ve previously won the Super Bowl. This might be even more tempting for bettors in the Sunflower State now that Kansas online sports betting sites went live as of September 1, 2022.

2. Pay Attention to Where the Game Is Played

But they’re not the only two teams with such an advantage. Do your research by comparing each team’s home vs. away record when handicapping for home team advantage.

West Coast teams traveling to the Eastern Time Zone tend to have less difficulty overcoming the time change, but East Coast teams are at an inherent disadvantage when forced to play on the Pacific Coast, three hours later than they’re used to.

Knowing where and when the teams played the previous week is also an important factor to consider. Some teams suffer from real disadvantages. West Coast teams traveling to the Eastern Time Zone tend to have less difficulty overcoming the time change, but East Coast teams are at an inherent disadvantage when forced to play on the Pacific Coast, three hours later than they’re used to.

Lastly, certain dome (indoor) teams can struggle to perform outdoors. For example, Drew Brees’ passer rating drops from 102.5 in a dome to 90.3 when playing outdoors. And this is all extremely useful information for NFL bettors.

Football is often referred to as the ultimate team sport, but there are certain one-on-one matchups that can dramatically affect the outcome of a game.

For example, a weak offensive tackle should not be expected to perform well against the premier edge-rushers in the league. Pay attention to major skill discrepancies between players who will be going head-to-head.

Coaches are perhaps the most significant head-to-head matchups that NFL bettors should consider. Every coach uses recurring strategies that fare very well against some opponents and flop against others. Coaches get to know each other’s approaches to the game, and some are better at responding to these strategic considerations.

A great example of this is Tom Coughlin and Bill Belichick. The Patriots have been dominant since Belichick has been steering the ship, but he was 2-5 when coaching against Coughlin following the 2018 season.

4. Know More than Just the Trends

When it comes to betting on NFL games, following the trends isn’t a bad idea — patterns sometimes provide valuable information. For example, from 2010 to 2018, the Bears went 12-5 ATS when coming off a bye week, while the 49ers, on the other hand, were just 5-11 ATS in that same time frame.

The sharpest bettors always look at the context behind the numbers when evaluating statistical trends.

Noticing that a team just scored 49 points the previous week doesn’t necessarily mean that their offense is firing on all cylinders. Go back and look at how all the points were scored. Maybe a defensive back fell down to allow a long touchdown pass. Perhaps the defense scored a couple of those touchdowns. Maybe they were just playing the Browns.

The sharpest bettors always look at the context behind the numbers when determining their football betting strategies.

As we mentioned, football is the ultimate team game, and small changes can throw off the entire unit. Make sure you know which players have missed practice during the week, what their status is for the upcoming game, and what role they play on the team.

Team injury reports can be a little vague, so it’s always a good idea to check the Twitter accounts of beat-writers for each team. They may not directly tell you the best football bets to do. But often, they will provide a little more detail that can help you properly evaluate NFL lines.

Teams that play each other twice per season get to know each other very well, and even bad teams tend to dig a little deeper when they are battling a division rival.

Looking back at 2016, the Jacksonville Jaguars, Chicago Bears, and San Francisco 49ers were three of the bottom-four teams in the NFL, but they all posted a 4-2 record ATS within their respective divisions.

Even though one team may appear superior on paper, divisional matchups are often much closer than anticipated. This makes the great choices to bet on the NFL point spread, but they can be risky choices on the moneyline.

7. Don’t Fall in Love with Value

We strongly recommend limiting parlays and teasers to 2-5 events when betting on the NFL.

You also need to be careful when constructing parlays and teasers. Don’t load them up with too many events. NFL teams are generally closely matched compared to other sports, and it’s far too difficult to correctly predict the outcome of more than a handful of games. We strongly recommend limiting parlays and teasers to 2-5 events.

8. Monitor the Lines Throughout the Week

Monitoring the betting lines throughout the week is a big part of maximizing your chances. Some online books may provide more favorable NFL odds, and as the week progresses, you may find the odds change.

It’s important to keep in mind the influence of public perception here. Popular teams like the Dallas Cowboys, Green Bay Packers, Pittsburgh Steelers, and New England Patriots will always have loyal supporters betting with their hearts. They’re often referred to as public teams, and it’s very likely they’ll be more heavily favored than the statistics suggest they should be.

If you’re planning on betting against the public, wait around and let emotional bettors drive the line movement in your favor. Conversely, if you’re planning to bet on a public team, jumping on an early line set by bookies is likely the best decision.

There is success to be had betting on the moneyline, the spread, and game totals. But to maximize your success, it’s crucial to know all the alternative bets you can make.

Many sportsbooks will allow you to bet on alternate spreads or buy and sell points. Instead of settling for a -3.5 spread that makes you a little uncomfortable, you can opt for a -2.5 spread with a more modest payout.

Look for value in alternate betting markets such as player props, over/under, and live betting. NFL futures bets are awesome for entertainment purposes but are notoriously difficult to handicap.

Enjoy the Action this NFL Season

The strategies above are great to keep in mind while wagering this football season, but they’re only a start. In the end, finding success in sports betting is all about putting in the time and effort to research your picks and manage your bankroll effectively.

If you’re looking for more football action than the NFL can provide, open up your Saturdays and take a look at our intro to college football betting guide for more helpful tips and tricks. Check the rules in your state first as different states have different regulations for wagering on college sports.

For example, Michigan sports betting rules allow wagers on college sports, including wagers on in-state teams, whereas in New York you cannot place a bet on a local NY team or a collegiate event taking place in the Empire State. Sports betting Arizona allows wagers on all college teams, but props on individual player performances are not permitted. Those ready to bet in Maryland will be pleased to know the Old Line State is following Michigan’s lead when it comes to wagering on college sports. LA sports betting bills have been clarified for Louisiana residents to wager online.

No matter where you’re betting from, Sports Betting Dime is here to help you get started with expert football betting advice and exclusive promos. As always, bet within your limits according to the amount of money factored into your bankroll management, and enjoy the action this football season!