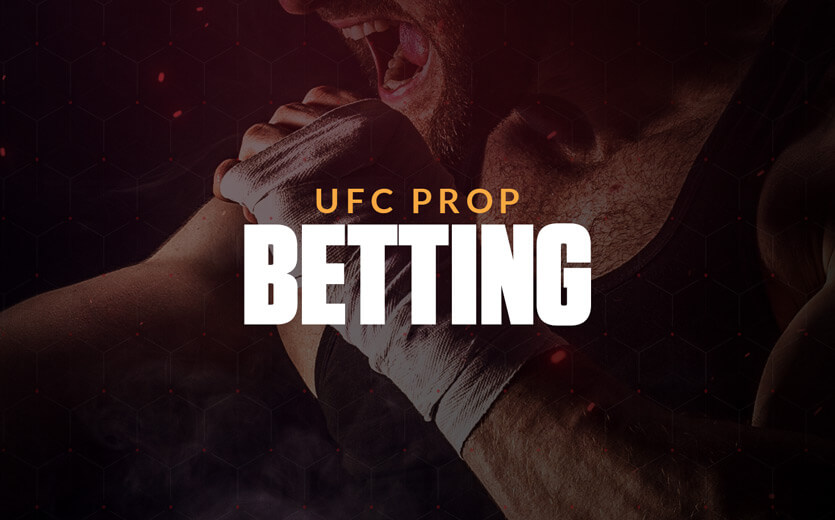 Few things matter more than wins and losses in the UFC. The more bouts a fighter wins, the closer they get to the championship belt, not to mention that a fighter’s record stays with them forever.

Still, there’s a lot more to a fight than the outcome. Momentum can shift throughout the contest, and there’s a myriad of stats recorded as two fighters duke it out.

This is where prop bets come into play.

Prop bets let you wager on more than just who wins and who loses. Let’s step into the octagon and take a closer look at how UFC prop betting works.

Prop betting gives you the chance to wager on events that occur over the course of a UFC fight night.

There’s no real limit to the prop bets you can make on UFC events, but major sportsbooks tend to offer a few in particular:

This list is by no means comprehensive, but they’re the main prop bets you’ll see at sportsbooks.

No matter which betting site you’re visiting, the popular UFC prop bets will all look similar. At least one of the wagers listed above will be highlighted, along with betting lines for the prop bet.

Let’s go through how to read the odds for UFC prop bets before examining these wagers more closely.

We’ll start with a “To Go the Distance” UFC prop bet from DraftKings. This prop bet is a wager on the fight going to the judges’ scorecards.

There are two different fights in the example above. These bouts occur in different weight classes, which has a pretty big impact on the respective betting lines.

The fight going the distance is favored in the bout between Cory Sandhagen and Frankie Edgar. “Yes” is listed at -167 odds, which means you must successfully bet $167 to win $100.

This fight takes place in the 135-pound bantamweight division, where smaller fighters typically don’t pack as much punching power as other weight classes. That’s a big reason why the fight is expected to go the distance.

The second fight in the above photo is a heavyweight bout between Alistair Overeem and Alexander Volkov, and these guys have immense punching power. As a five-round main event between two combatants who hover around the 265-pound weight limit, it’s highly unlikely this one goes the distance.

Now that we know how to read mixed martial arts prop betting lines, it’s time to look at more props in detail.

The method of victory prop bet is one of the most popular wagers in all of combat sports. It’s a simple bet on how you think the fight ends. There are three main ways a UFC fight can end:

Take a look at this example from BetMGM: 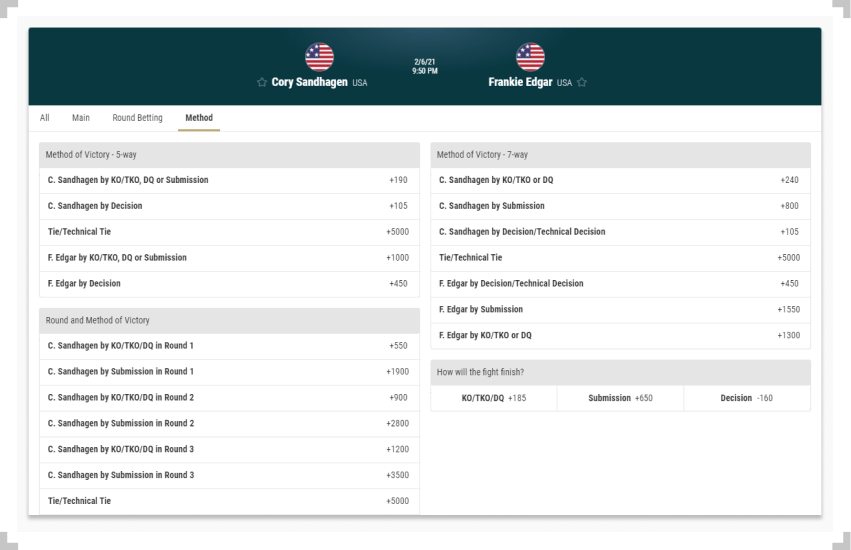 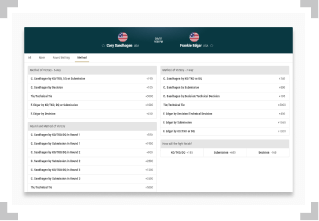 They list a ton of method of victory props for the fight between Cory Sandhagen and Frankie Edgar. You’ll notice that every wager has a “+” symbol in the betting lines, which is a testament to just how hard it is to predict precisely how a fight will end.

Still, you’ll end up with a pretty payday if you manage to hit on one of these prop bets. For example, you walk away with a $2,800 profit if you successfully bet $100 on Cory Sandhagen winning by submission in round 2.

Keep in mind, not all method of victory props specify both the winning method and the exact round. The odds are longer on wagers that call for both, but it’s less risky to bet on one or the other.

You can find a lot of prop bets related to the rounds in a UFC fight. These wagers usually cover outcomes to do with when the fight is stopped or the total number of rounds in the bout.

Let’s examine an example of round prop bets from FanDuel: 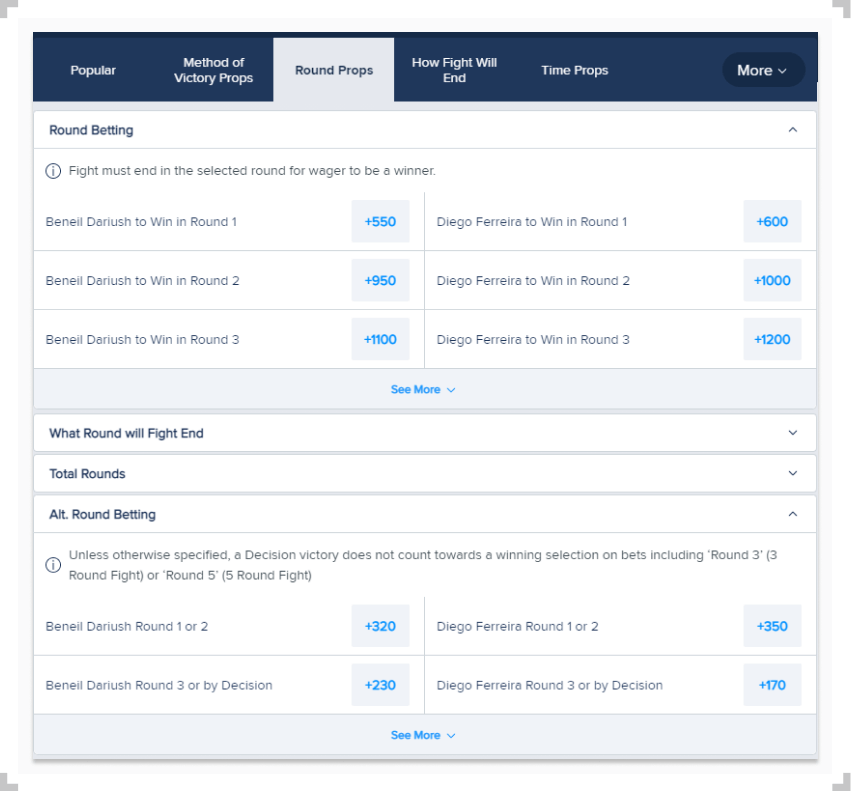 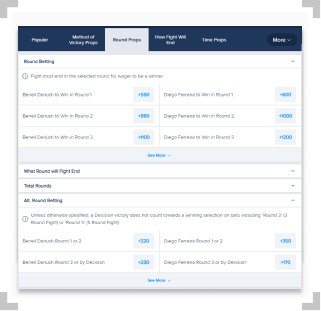 As you can see, there are many round prop bets available for this contest between Beneil Dariush and Diego Ferreira. You can bet on which fighter wins in a particular round, just the round, or the total number of rounds, to name a few.

Let’s say we put a $100 prop bet down on Diego Ferreira winning in round 3. If we hit this wager, we walk away with $1,300. This is a sizeable payout, but it’s also a risky bet, as predicting both the winning fighter and the exact round they win is a challenging proposition.

We have a whole guide dedicated to round betting if you want to know more about these unique prop bets.

UFC time prop bets are a lot like round props, but they’re specifically tied to the amount of time that has elapsed in a fight as opposed to a particular round. 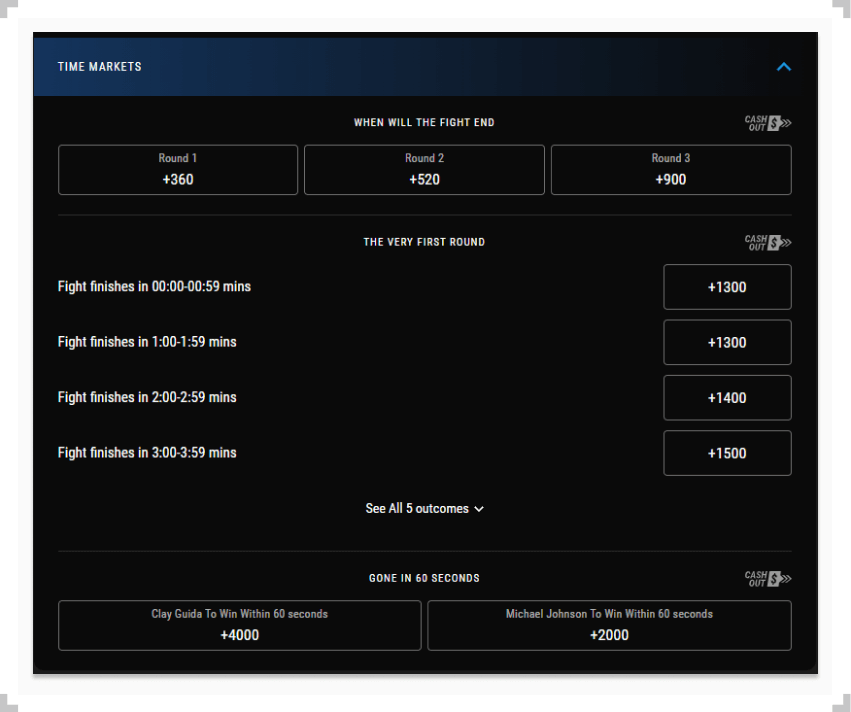 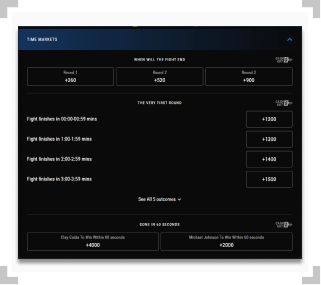 You’ll notice that PointsBet lists the round bets and time bets in the same section for this contest between Clay Guida and Michael Johnson. That’s done by design because they’re very similar wagers.

The odds are long on time props because it’s almost impossible for bettors to know exactly when a fight will finish. Anything can happen in a UFC fight, so choosing the exact time frame is pretty much a shot in the dark.

Still, there’s a couple of things to consider before you go to make this kind of prop bet:

If you look at the image above, you’ll notice PointsBet has a “Gone in 60 Seconds” prop. Clay Guida and Michael Johnson both have the ability to end a fight in under a minute, but we might want to dig a little deeper into their fight history to see if we can find the edge we’re looking for.

Clay Guida has lost within the first minute twice in his career, while Michael Johnson has one sub-60 second win on his record. That’s probably why the odds favor Johnson in this example, but still, +2000 odds aren’t very bettor friendly.

It’s up to you to determine if the risk is worth it, but digging into fighter history can be really helpful for any UFC prop bet. Studying relatively unknown fighters who don’t end up on main cards is an excellent idea for anyone looking to beat the oddsmakers in Las Vegas.

Other UFC Props You Can Make

While the prop bets mentioned above are good examples of wagers you’ll usually see at major sportsbooks, there are a couple of other options you could consider. Let’s go through those alternatives right now!

Performance of the Night Wagers

The UFC rewards fighters who put on spectacular performances with $50,000 bonuses after each event. The fighters aren’t the only ones who can win a bit of extra cash, as bettors can make prop bets on who walks away with Performance of the Night bonuses.

If a powerful fighter like Conor McGregor is fighting, you might want to put some money down on him winning a Performance of the Night bonus. Keep in mind, anything can happen with MMA betting – McGregor’s opponent Dustin Poirier walked away with a performance bonus after their last fight at UFC 257.

You might also want to consider stringing a few prop bets together on the same bet slip as part of a parlay.

For example, you could make a parlay bet with method of victory prop bets from multiple fights on the same card. This would be risky, but the payout could be much more lucrative than a simple moneyline bet.

As the old adage goes, no risk means no reward.

The Best Sportsbooks for UFC Betting

You can find UFC prop bets at almost any sportsbook, but these are some of our favorites:

The bookmakers above usually have a group of prop bets ready a few days before scheduled fights take place. Check out our recommended UFC betting sites and full reviews for all the details on these premier online sportsbooks, including the specific betting markets they serve.

Betting Knowledge for Every Wager

Whether you’re wagering on props, parlays, or any other bet, we have all the sports betting knowledge you need. That’s why we have covered every type of UFC bet you can wager, in this comprehensive guide.

Check out our “How to Bet on Sports” section for more guides on betting pretty much any sport under the sun.