March Madness Upsets: How to Spot Them with These Integral Trends 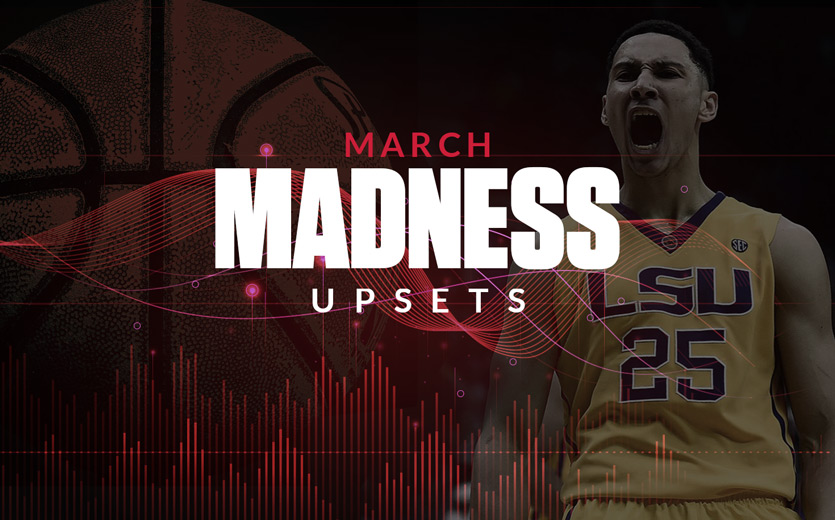 March Madness has such a broad allure, in part, because of the prevailing feeling that anything can happen. That feeling became all the more prevalent after UMBC, a #16 seed, demolished #1 overall seed Virginia in 2018, dropping the all-time record of #1s to 135-1.

While it’s easy to predict that there will be chaos in the bracket every year, it’s a lot harder to pinpoint where the chaos will arise. Is there any way to spot March Madness upsets-in-the-making with 100% accuracy? Of course not. But looking at past results, there are certain identifiable traits and trends that are present in an alarming number of NCAA Tournament upsets.

Here are the four trends our research has identified.

1. Fade Mid-Majors with a Top-Five Seed

Over the last six years, mid-majors that get a top-five seed have been upset at a startling rate, especially the ones not named Gonzaga.

In the last eight tournaments, 15 non-Gonzaga mid-majors have received a top-five seed. Six of those lost in the first round. Six more lost in the second round, and every one of them lost against the spread (ATS), as well.

Before Houston’s run of success in the last two tournaments, the only one of these teams that advanced to the Sweet 16 was #4 SDSU in 2014, which went 2-1 ATS in its three games.

Fading these mid-majors on the moneyline in the first round has been profitable. Fading them ATS in each of the first two rounds has been, as well.

That holds true for every seed-line, as illustrated in our “Most Common March Madness First-Round Upsets” article.

Not only have they surpassed #12s in terms of all-time wins in the first round, but they are also gaining on the #10 seeds (57 wins vs 54 wins) and, more importantly for present purposes, have a 14-10 record (60% win-rate) over the last seven years.

Obviously, you don’t want to blindly follow a trend from a sample size this small. So is there something causing it that we can get behind?

3. Bet on Teams Rated Higher at KenPom.com than by the Selection Committee

There is always some disparity between the Selection Committee’s seedings, which aim to reward teams for their work to date, and the rankings at KenPom.com (a popular analytics website), which aim to predict future outcomes.

The discrepancies between the two are shrinking, but they still exist. Over the last eight tournaments, 15 teams in KenPom’s top-35 have received an #11 seed or worse. They are 22-15 straight up (including the First Four play-in games) and 18-15 SU excluding the First Four (where they have tended to be favored, for obvious reasons).

Distilling the information in the table a little further, only two of those teams actually lost in the Round of 64: Kansas State 2017 and Saint Mary’s 2013.

If a team is ranked outside of KenPom’s top-60, count to ten before picking them to pull an upset.

If a team is ranked outside of KenPom’s top-100, count to the AAV of Mike Krzyzewski’s salary.

Correctly betting on a #1 or #2 seed to lose in the first round will obviously result in a huge return. But it doesn’t happen often, so you have to be very discerning to make this a winning strategy longterm.

There have been just six #1 and #2 seeds that have been upset since 2001. (All of those came in the last eight tournaments.) These teams don’t share any single trait in common (apart from the losing), but there are a couple of things that stand out.

When trying to identify a #1 or #2 seed that’s vulnerable, look for a team that is considerably weaker at one end of the court and plays slowly.

The reason why slow-tempo teams are more prone to upsets is pretty simple; a slower tempo means fewer possessions, and the fewer possessions there are in a game, the greater the likelihood that a less talented team will be able to play to the level of a high-caliber opponent.

To put it another way, it reduces the number of opportunities for the better team to be better.

It’s not every year that a #1 or #2 seed has an offense/defense that ranks relatively low compared to its top-seeded brethren. But when you see one that does, take a longer look at their matchup in the first round, especially if it’s a team that plays at a plodding pace.

Now that you know some of the hallmarks of March Madness upsets, head over to our sportsbook reviews, find the betting site that’s best for you and try your hand at betting on college basketball.

But always remember: never, ever, under any circumstances wager more than you can afford to lose.

If you’re in search of more statistically oriented March Madness betting tips, head over to our strategy section. We touch on everything from perennial traits of March Madness champions, to key final four trends.