Remember the good old days when we could only guess what athletes were thinking about during their downtime? It was a simpler time, when we were free to imagine that cornerbacks were contemplating criminal justice reform, and left fielders were trying to calculate pi to the nth digit.

That changed forever in 2006 with the advent of Twitter. The social media platform allowed professional and amateur athletes alike to pontificate on everything from what they were eating for lunch to who they wanted to hook up with it. The ensuing deluge of tweets shattered many of our most precious illusions and quickly revealed that jocks really are just as mindless as the rest of us, perhaps with the exception of Arian Foster.

We’ve rounded up 15 of the dumbest and most ill-timed athlete tweets from the past decade to demonstrate that sports and technology don’t always go together. A little birdy told us you might like them. 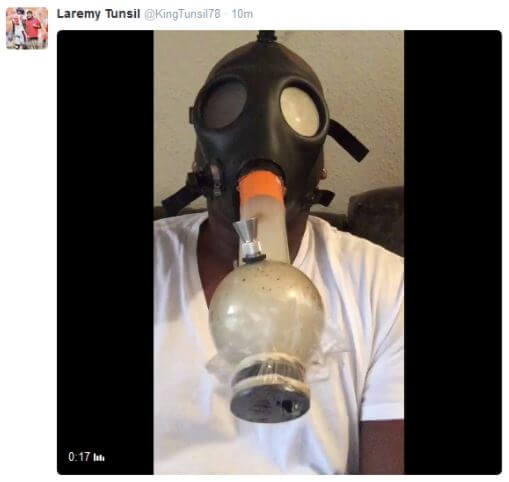 Laremy Tunsil’s career went up in smoke on April 28, 2016, when the University of Mississippi offensive tackle filmed himself smoking weed through a gas mask. The video quickly went viral and is believed to have been responsible for dropping him 13 spots in the 2016 NFL Draft. Tunsil now plays for the Dolphins, where he gets to watch Jay Cutler get smoked every week.

We love when players get involved in team rivalries, but Bills wide receiver Stevie Johnson took things a little too far in 2013 when he encouraged North Korea to bomb the home of the New England Patriots. Ironically, it was the Patriots who bombed the Bills later that year, easily winning both games against their AFC East rivals. We’d say it was retribution for the tweet, but honestly, they do that almost every year.

Weird things can happen when you get hit in the head by a baseball travelling 120 MPH. In the case of A’s pitcher Brandon McCarthy, it resulted in this brazen tweet sent from a Bay Area hospital. The good news is that McCarthy’s skull healed completely and he returned to the mound. The bad news is his wife wasn’t quite as receptive to his suggestion as he had hoped. 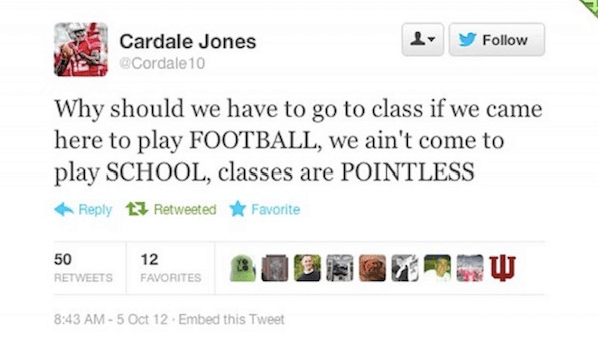 Perhaps if Cardale Jones had gone to class he would understand the rudiments of sentence structure. The Cleveland native left Ohio State before graduating and is currently in Los Angeles, where he’s one notch above the water boy as the Chargers’ third-string QB. 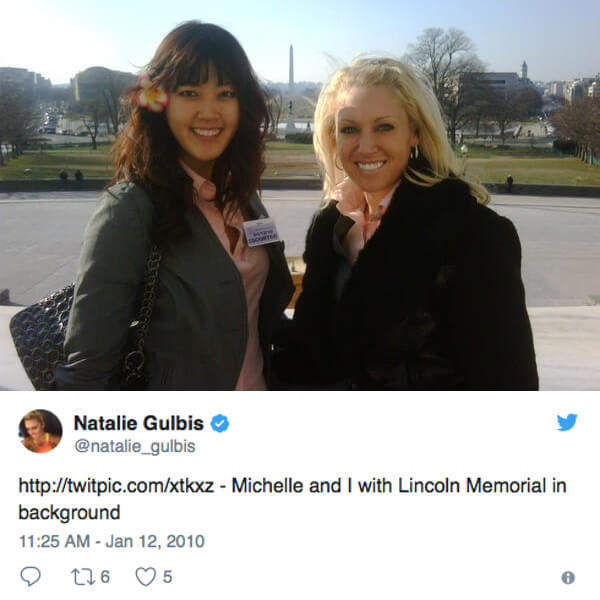 Natalie Gulbis isn’t really a dumb blonde, but she plays one on Twitter, where she’s been known to make a mistake or two. The LPGA star made one of her biggest gaffes in 2010 when she posed with fellow golfer Michelle Wie in front of what she thought was the Lincoln Memorial. It wasn’t, and she quickly deleted the tweet after getting plenty of good-natured flack from her followers.

Imagine accidentally tweeting a message you had intended as a private DM. Now imagine it being seen by all 3.77 million of your followers. That was the predicament Lance Armstrong found himself in back in 2012 when he broadcast his personal phone number to the world. The disgraced Tour de France champ quickly deleted the message and, more than likely, got an unlisted number. 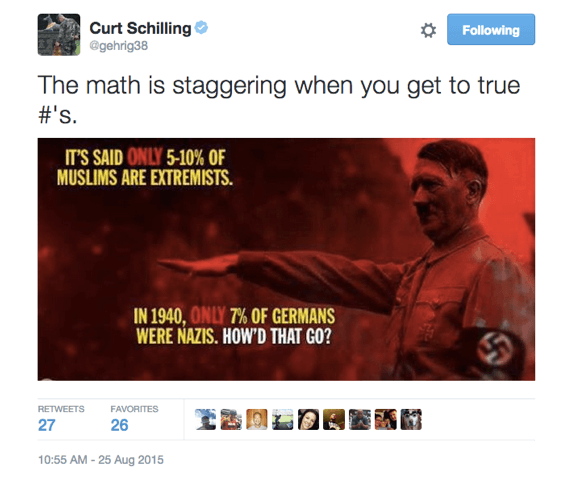 Curt Schilling’s career as a broadcaster was mercifully paused on August 25, 2015, when the three-time World Series champ posted a meme comparing Muslims to Nazis. ESPN suspended him for the remainder of the season and fired him for good one year later when – surprise, surprise – he posted another insensitive comment on Facebook. Schilling’s detractors always knew he would show his true colors, they just didn’t know those colors would look so much like a Confederate flag.

Metta World Peace’s tweet seems innocent enough, until you realize it was sent on May 28th, three full months before Labor Day. Details never were his strong suit.

The problem with the Internet, as Larry Nance Jr. discovered in 2015, is that nothing ever really disappears. His highly opinionated tweet became a major issue that year when the 6’9 forward joined the Lakers and began sharing a locker room with none other than Kobe Bryant himself.  Nance apologized to his All-Star teammate tout suite before training camp and the two put the issue behind them. 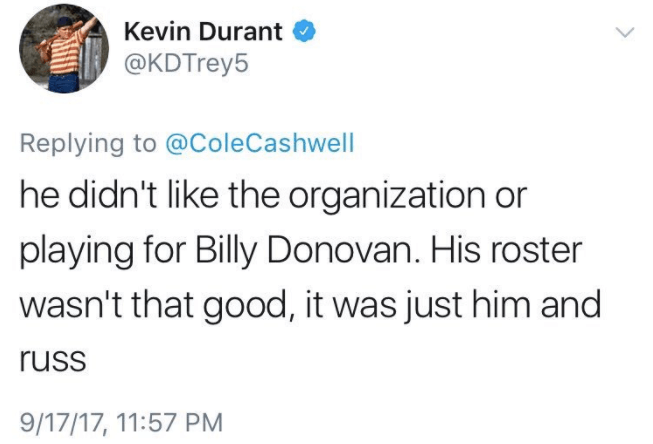 Kevin Durant made headlines for all the wrong reasons in 2017 when he used his personal twitter account rather than his burner account to defend his honor and bash former coach Billy Donovan. KD was widely ridiculed around the league for his immature actions, and immediately deleted his alternate accounts. On the positive side, it did help take the heat off of Draymond Green for posting pictures of his junk during the Summer Olympics. 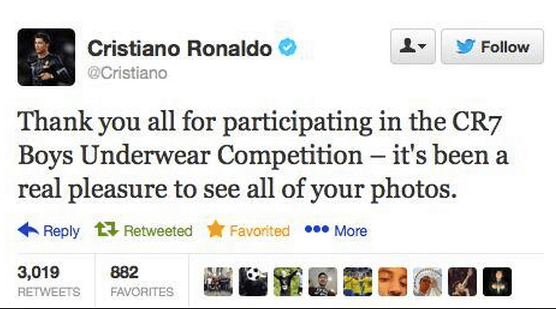 Futbol fans had a good laugh at Ronaldo’s expense when the Real Madrid star posted an unintentionally hilarious tweet about an online competition he was paid to promote. We hope he was very generously compensated for the unfortunate gaffe.

Actually, we do know what really happened. If anything is hard to believe here it’s the fact that the Steelers kept Rashard Mendenhall around for five years when he scored only two touchdowns.

Dennis Rodman demonstrated just how delusional he really is back in 2013, when he petitioned North Korean leader Kim Jong-un to release imprisoned Korean-American missionary Kenneth Bae. Bae was eventually freed in 2014, but needless to say, it had nothing to do with the diplomatic skills of the five-time NBA champ.

Denver Broncos cornerback Tony Carter discovered there are some things you don’t joke about when he playfully referenced a mass shooting at a movie theater in Aurora, Colorado. The Florida State alum deleted the tweet after receiving reams of negative press and took to Twitter to apologize for his comment.

Here’s a tip: if you want to get away with a banned activity, don’t boast about it to your 218,000 followers on Twitter. Bucks forward Charlie Villanueva was promptly punished by the team after using social media during a game against the Celtics, and curtailed his in-game reporting immediately afterwards.