If humanity doesn’t implement some sweeping changes, the world is headed for a sweltering apocalypse. We can (almost) all agree on that (Ted Cruz and his ilk aside).

But in this age of unprecedented technological advancement, most people would rather drop their coin on the latest iPhone than, say, locally sourced produce.

Maybe it doesn’t have to be one or the other, though. What if I told you that you could keep up with the Joneses and their march towards the singularity while simultaneously reducing your carbon footprint?

You can (in some ways) thanks to the advent of a host of eco-gadgets!

These days, you can technologically and environmentally upgrade everything from your dishwasher to your TV to your cubicle. It’s a win-win, unless the Jitterbug is more your speed.

Below, we count down our five favorite eco-gadgets, and predict the next big things from the world-saving side of the tech industry.

We start on a bit of a gross note. Sorry about that. But we’ll have to shift the paradigm for grossness if we’re going to dig ourselves out of this climate-change hole. Farm 432 is a scoop in the right direction. It’s effectively a tiny green house for farming protein in your own home. Why is that gross? Because the protein is farmed from maggots. The UN has urged us all to start eating more bugs in order to get protein, though. Why not hop straight in the deep end with maggot larvae?

Artificial light, it’s the innovation that’s allowed us to get up early, stay up late, and blind pilots. It’s also a huge resource suck. Philips helped attenuate that impact with its ten-watt L Prize LED bulb. By replacing traditional 60-watt bulbs, the product could, apparently, save Americans as much as $3.9 billion worth of electricity.  It also lasts up to 30,000 hours, which is ten years of use at about eight hours per day.

As efficient as the Philips L Prize bulb is, it still requires some non-renewable power to create light. Know what doesn’t? The Solenica Lucy. It’s basically a fancy-a**, solar-powered mirror. Dubbed a “smart lamp,” Lucy is designed to reflect sunlight into the darkest recesses of your home. It’s fitted with a solar-powered brain, of sorts, that adapts its mirrors to the movement of the sun throughout the day, ensuring the light is continuously reflected to the desired area.

Want to cut down on your use of and the need for plastics? You can take a small step on that path with Lenovo’s “Virtual Keyboard.” Lenovo is equipping their new phones with a laser that can project a typable keyboard onto the table in front of you. Ok, it’s not going to have the biggest environmental impact, since most people don’t hook keyboards up to their phones, anyway. But it’s something … and it’s freakin’ cool.

I’ll admit it, one of my least favorite things about student life was doing dishes by hand. When I had the funds to live in a place with a dishwasher, I jumped at the opportunity. But then I realized I barely had enough dishes to fill it, and it would take the better part of a week to get it even close to full – meaning my favorite dishes were almost always sitting in the dishwasher, dirty. I didn’t want to run the dishwasher half-full, though. That seemed like a waste. It wasn’t the ideal situation.

The Gota dishwasher could have solved all of my problems!

Designed for singles and smaller families, the Gota allows you the convenience of a dishwasher without wasting water. As Drew Hendricks explained on Inc.com, the Gota “steams during pre-wash, then gathers the vapors for washing. Not only is it a green alternative, but the steam process also results in cleaner plates and flatware.” IDEAL! 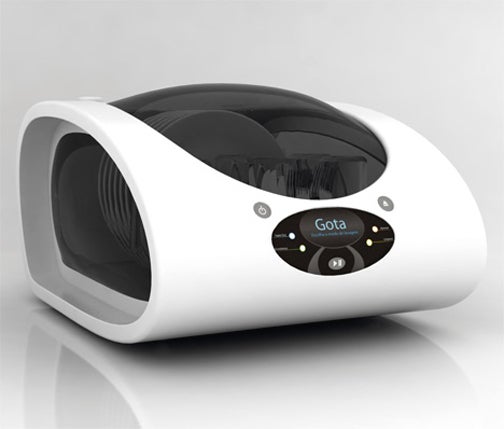 Predictions on the Next Top Eco-Gadgets :

Between the Nebia and the WUPI Valve, 2016 could be the year of the eco-showerhead. A standard showerhead uses as much as six gallons of water per minute. Eco-friendly showerheads can cut that number down as much as 70-percent!

Odds eco-showerheads catch on: 1/2. There’s no real downside! And showering with the Nebia has been described as “like walking through a cloud that cleans you.” Now that just sounds lovely.

The Miito – which looks like a frother for your latte – aims to solve the issue by turning any vessel into a water-boiler.

Just fill your desired cup with your desired amount of water and then put the Miito “induction stick” into the cup. Next thing you know, hot-ass water!

This, of course, leads to the question: why can’t you pour water into your desired cup and then pour that exact same water into a standard kettle?

You can. And that would solve the problem.

But you don’t do that, do you?

Odds it catches on: 6/1. Despite the stats cited by the Miito people, they’re going to have a hard time convincing the general public that over-filling kettles is a real environmental issue.

Slovakian company Nice Architects has developed a nearly self-sufficient, eco-friendly, miniature home called the “Ecocapsule.” It’s described by the company as a mobile home “designed for extended off-grid living for up to a year for 1 – 2 people.” Designed to harness solar and wind power and collect rain water, the Ecocapsule doesn’t need to be hooked up to a municipal water system or power grid. It’s unique shape is designed to prevent heat loss.

Odds it catches on: 9/1. It’s small, yes, but you still need a sizable tract of land to put it on, and one that has sufficient access to sun, wind, and rain. That’s at a premium these days.

Randy is a father of two. When he’s not enjoying and betting on his favorite sports hockey, football, and basketball, he coaches youth sports. His favorite sports betting moment is when he witnessed Belarus upset Sweden in the 2002 Salt Lake City Winter Olympics.

Randy is a father of two. When he’s not enjoying and betting on his favorite sports hockey, football, and basketball, he coaches youth sports. His favorite sports betting moment is when he witnessed Belarus upset Sweden in the 2002 Salt Lake City Winter Olympics.