Over the years we have seen some fantastic animated films. In fact, there is argument to be made that the last few years have been a golden era for the genre.

Not only is 2016 going to reinforce that proclamation, but it could mark the biggest year at the box office for animation as a whole.

Below are the big cartoon features that are coming out this year, along with the odds of who I think will dominate the (worldwide) box office.

Find something you like, grab a kid, maybe make sure it’s yours, and check some of these out at a theatre near you.

Pixar’s anticipated sequel to 2003’s global hit Finding Nemo is coming this summer. It’s pretty easy to predict that Finding Dory will be the highest-grossing animated film of 2016. Pixar movies are usually a lock to do big dollars. Finding Dory could easily hit the $1 billion mark and I’m predicting it will do even more than that.

Walt Disney just keeps putting out quality animated films. Many are calling it another Disney golden era and Zootopia is one of the best films of the year. Not only has it been cleaning up domestically but it has been climbing up the worldwide box office at a rapid pace. As I write this, Zootopia currently sits as the sec0nd-highest grossing film of the year ($600 million, just behind Deadpool). The only animated film I predict surpassing it is Finding Dory. 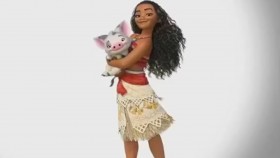 Following the popularity of the Princess and the Frog and Frozen, stereotypes in Disney films are becoming a thing of the past; Moana is looking to continue the trend by featuring a princess of Polynesian descent. Right now Disney is hitting on all cylinders with it’s animated features, so expect Moana to absolutely kill it at the box office. Will it reach Zootopia numbers? If the reviews come in strong, it could have the legs to do even better than my $800 million prediction.

I know … another Ice Age movie? Here in North America the series has jumped the proverbial shark … er, make that mammoth. But guess what? It still makes a ton of money overseas. Ice Age 4: Continental Drift is one of the highest-grossing animated films of all time internationally. When there is money to be made, studios are going to milk it for all it’s worth. Domestically, Ice Age 5 will probably do average dollars, but overseas revenue could push worldwide box office numbers over the $700 million mark.

Dreamworks has done a great job with the Kung Fu Panda series, and Kung Fu Panda 3 is another example of how to do a proper trilogy. The film did solid numbers domestically and is still raking in money worldwide. As I write this, Panda is inching closer to the $400 million mark, globally, which makes it the fourth highest-grossing film of 2016 just behind The Mermaid.

From the people who brought us Despicable Me and those cash-grabbing Minions, comes an animated feature about talking pets. Illumination Entertainment’s The Secret Life of Pets  is going to have a nice opening weekend, and its simple talking-animal premise (similar to Zootopia), along with some aggressive marketing from Universal, should give it some legs. Look for this movie to satisfy audiences in the same manner as Despicable Me, which should put it around the $500 million mark worldwide.

Just like Disney, Illumination Entertainment is looking to have a big 2016 with two separate releases. In addition to The Secret Life of Pets, they’ll also bring us Sing come Christmas time. Family films during the holiday season usually do strong numbers, and with Illumination’s track record, an excellent ensemble cast, and the fact that musicals are still very popular, Sing will carry its tune … and your money … all the way to the bank.

I would say that the popularity of the Angry Birds games peaked in 2011/2012, which means Sony is taking a risk with an animated feature. That said, the trailers actually don’t look bad and there might be some nice humor in this for kids and adults. It should do okay at the box office until Finding Dory and The Secret Life of Pets open. Domestically, it will be average, but overseas is where Angry Birds could really take off.

Trolls is a tough one to predict as DreamWorks’ films have been hit or miss. The big red flag here is that it’s opening up alongside Marvel’s Dr. Strange, and anything comic book related will suck in huge audiences. If the trailers look decent then Trolls could have some legs and accumulate some cash as it rolls along. You just have to look at other DreamWorks’ animated features like The Croods and Turbo which did very well on their opening weekends. This is a tentative prediction as it could go either way.

This is the second film from Warner Animation, and it could benefit from the success of their first feature, The Lego Movie. I predict an average opening weekend but lack of animated competition (until DreamWorks’ Trolls in early November) could mean a steady rise as parents look for anything age-appropriate. I’m predicting $300 million worldwide, but it definitely has a chance to do better.

Don’t be fooled, this animated film is for the adults. Brought to you by the zany minds of Seth Rogen and Evan Goldberg, this film has a plethora of voice talent and could be a surprise hit. For now, I’m being a tad conservative with my prediction but the trailers look hilarious. Depending on the marketing, this could move higher up the list. The only issue is that when you take families out of the equation, the money tends to go down, no matter how good the movie is.

Video game-based films are hit or miss at the box office. Ratchet & Clank looks like it is going to stick close to its source material but will only attract people who are fans of the game. It’s also surrounded by a lot of big name blockbusters. I’m predicting this one to flop domestically but might gain a few dollars overseas.

LAIKA’s films have been fantastic but never really done that great at the box office … and that’s okay. A lot of their films end up doing well on VOD or Netflix. Kubo and the Two Strings opens in mid-August which means it will have some uninterrupted time to at least make some money, unlike its predecessor, The Boxtrolls.

It’s an absolute shame that Paramount dropped this fantastic animated feature before its release date in the USA. Although the film did get released in Canada and other parts of the world, Netflix came to the rescue and will be showing The Little Prince on the mega-streaming site in the States. That said, the loss of box office dollars in the USA has dropped this to the bottom of the list.

GUIDE
How to Bet on the Kentucky Derby: Easy Steps to Bet Today
GUIDE
5 Betting Trends for the Kentucky Derby
GUIDE
See All the Daily Odds Boosts Offered at Each Sportsbook
GUIDE
Where Is Sports Betting Legal? State by State Legal Tracker
Terms & Conditions