What Value Does Strength of Schedule Bring? 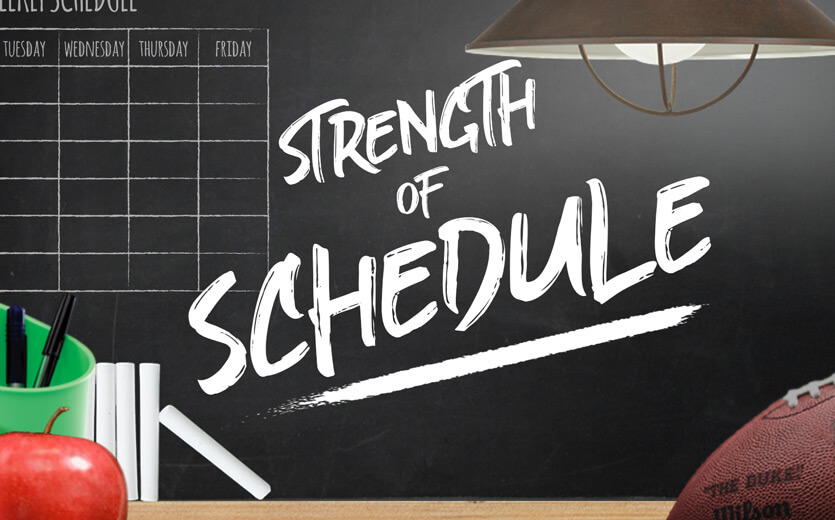 Strength of schedule is a term you’ll hear associated with sports betting on frequent occasions. The concepts comes into play in all sports but it gets especially prevalent consideration during football season. It’s a prominent topic of discussion when betting on the NFL.

Before factoring the value of strength of schedule into any potential wager, there’s a number of considerations that must be taken into account.

For starters, what does strength of schedule mean? Secondly, how is it calculated? And perhaps most importantly, how vital a component is it in the overall scheme of sports betting?

What Is Strength of Schedule?

Let’s look at the NFL to explain how strength of schedule is traditionally calculated. It’s truly a simple formula.

You simply need to add up the win-loss record of every one of a team’s opponents for the upcoming season.

For instance, based on these calculations, the Oakland Raiders were afforded the NFL’s toughest schedule during the 2019 regular season. We know this because the Raiders’ opponents compiled 137-117-2 record during the 2018 campaign. That worked out to a combined .539 winning percentage.

The theory behind strength of schedule calculations is simply that the teams playing more difficult slates will struggle to enjoy success.

In 2019, that held true for the teams with the three most difficult schedules. The Raiders and Denver Broncos (.537) both finished 7-9. The Jacksonville Jaguars (.531) endured a 6-10 season.

However, at the other end of the schedule strength spectrum, things didn’t play out as expected.

The Washington Redskins faced the easiest slate during the 2019 NFL season. Washington’s opponents went 119-135-2 for a .469 winning percentage. But the Redskins were a dismal 3-13 come season’s end. Clearly, easy didn’t make things easier for them.

In fact, four of the six teams supposedly facing the softest slates in 2019 endured brutal seasons. The New York Jets, New York Giants, and Cincinnati Bengals were among a five-way tie for the second-easiest schedule with average opponent winning percentage of .437. The Jets went 7-9, the Giants finished 4-12, and the Bengals posted an NFL-worst 2-14 slate.

Of the five teams among this group, only the New England Patriots (12-4) managed to earn a place in the postseason. In fact, five of the 12 playoff teams in 2019 played schedules that ranked among the top 11 in terms of level of difficulty.

Is the System Flawed?

Basing expectations on how a team’s opponents fared last year is far from an exact science. Fundamentally, this approach rests on the false assumption that every team in the league will be as strong an opponent this year as they were the previous season.

But we know that team’s perform differently season-to-season even without the major lineup changes that frequently affect NFL rosters.

In 2017, the Buffalo Bills went 9-7 and earned their first playoff position since 1999. But entering the 2018 season, veteran quarterback Tyrod Taylor was gone. In his place were journeyman veteran AJ McCarron and rookie Josh Allen. Minus their starting QB, the Bills slumped to 6-10, and weren’t nearly as quality a team as their projection under the strength of schedule calculation indicated.

Likewise, the 2017 Houston Texans were a 4-12 team. But Houston lost All-Pro defensive lineman JJ Watt and QB Deshaun Watson to season-ending injuries early into the campaign. Minus difference makers on both sides of the ball, the Texans weren’t nearly as formidable of an opponent.

With both those players back in 2018, Houston went 11-5 and won the AFC South. The Texans weren’t anywhere near the easy out the strength of schedule formula indicated them to be.

The True Method for Calculating Strength of Schedule

Baseball legend Satchel Paige is famed for his suggestion not to look back, because something might be gaining on you. In a sense, that logic should be applied when tabulating strength of schedule.

Prior to each season, all of the leading sportsbooks will offer win total wagering. Each NFL team is assigned a total number of wins they expected to achieve during the upcoming season. Bettors determine whether to wager the over or the under on this total.

These calculations are tabulated by the best oddsmakers in the business. They take into account all of the factors a team has undergone since the end of the previous season – player departures, roster additions, coaching changes and draft picks.

This is the number you should be utilizing when calculating strength of schedule for an upcoming season. Instead of making a betting decision on what occurred yesterday, you’ll be projecting your wagers based on the expected outcomes of tomorrow.

In fact, based on this formula, three of the five teams with the easiest schedules – the Bills, Philadelphia Eagles and Patriots – made the 2019 playoffs.

When Strength of Schedule Can Add Value

There are areas of sports betting where traditional strength of schedule offers more value.

Futures betting on player awards is perhaps the biggest. Only one of the past seven winners of the MFL MVP played for a team that won fewer than 12 games. More games against weaker teams equates to better overall numbers.

Predicting Coaches to Be Fired

The first coach to be fired is another prop where it makes sense to play close attention to strength of schedule. If a coach who figures to be on the hot seat has been dealt a tough hand to start the season, that could grease the skids to an early demise.

Strength of schedule is also a valuable tool when betting on the postseason. Since the NFL adopted its current playoff format in 2002, the team with the tougher strength of schedule during the Wild Card round is 48-24 straight up and 49-21-2 against the spread.  Underdogs coming into Wild Card games with the more difficult schedule slate behind them cover at an astonishing 73.6 percent rate (28-10).

Cover All Your Betting Basics

Strength of schedule is just one of many things to think about when preparing to bet on football or any other sport. Fro more advice to help get you started, check out the instructional content in our Sports Betting 101 series.

After all, sound research and careful bankroll management are the keys to long term sports betting success.