How To Bet on the NFL Draft 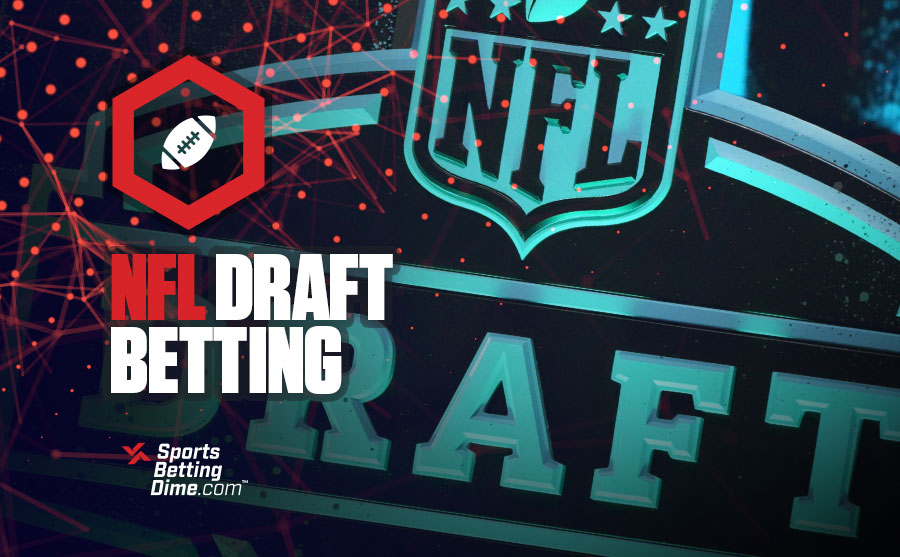 The NFL Draft is a perfect opportunity to enjoy football betting in the spring when there’s no regular season or playoff action on the gridiron.

You might be wondering exactly how to bet on the NFL Draft. From NFL Draft odds to the best sportsbooks and promotions you can wager with, we’ve got you covered with important tips and key information.

Here’s everything you need to know about how to bet on the NFL Draft.

The first thing to keep in mind with NFL Draft odds is that line movement is all over the place. As one of the most unpredictable nights in the NFL calendar, bettors have plenty of opportunity to make wagers and win some money.

Get Four Free Bets of $200 with PointsBet's Second Chance!

Get Five Free Bets of $100 with PointsBet's Second Chance!

Get Two Free Bets Up To $2,000 with PointsBet's Second Chance!
Details
CLAIM OFFER

Get Two Free Bets Up To $2,000 with PointsBet's Second Chance!

There are a ton of betting options when it comes to the NFL Draft. Let’s look at one of the most popular bets, the first-overall wager, to get a better understanding of how NFL Draft odds work.

With so much unpredictability in the draft, most lines you’ll see have a (+) symbol. The +160 line on Aidan Hutchinson indicates you would win $160 from a $100 wager on Aidan Hutchinson to go first. The total payout in this scenario would come to $260.

Four different players were listed as the favorite to go first overall leading up to the 2022 NFL Draft, so you can usually expect a lot of line movement year-over-year. Other players like Malik Willis have seen their odds to go first overall move from +3000 to +1000 over the course of the year. While Quarterbacks often go first overall, 2022 is a bit light at this position, with other prospects like Kenny Pickett listed at +10000 odds.

We’re just one day away from the #NFLDraft

Who will be the first offensive player taken this year? 🤔🤔🤔

The Jacksonville Jaguars are expected to select first overall this year, which usually has an impact on the NFL Draft odds. Certain teams have positional needs compared to other teams, which could impact their draft strategy. For examples, the Kansas City Chiefs are widely expected to select a wide receiver in the first round after trading away Tyreek Hill during the offseason.

Other teams like the Detroit Lions, Houston Texans, New York Jets and New York Giants, Carolina Panthers, and Atlanta Falcons are also in the mix, and could trade up or down in the draft which would cause some line movement. Check out our 2022 NFL Mock Draft based on odds for a better idea of how it could all play out.

Not all sportsbooks are created equal, and the NFL Draft betting odds will differ depending on which sports betting site you’re looking at. Make sure you do some line shopping with sports betting apps like Caesars Sportsbook, FanDuel, DraftKings, and BetMGM to compare which sportsbook will get you the biggest payouts.

The 2022 NFL Draft begins at 8pm ET on Thursday, April 28, so you’ll want to have your best NFL Draft bets placed before then.

The first-overall wager isn’t the only way to bet on the NFL Draft. Keep in mind that some sportsbooks limit the types of wagers they offer, and certain states have restrictions on NFL Draft bets, which is covered further down the page.

Consider some of the following options for how to bet on the 2022 NFL Draft:

Most of the betting types on this list are self explanatory, except for NFL Draft prop bets and over/under wagers. Totals betting and prop wagers on the NFL Draft have a lot of variety, so let’s explore those options in further detail.

Over/under wagers, also known as totals betting, is a system where sportsbooks set a value for a certain bet and you have to decide whether the final outcome will be above or below that value.

For example, the 2022 NFL Draft has an over/under bet of 3.5 Quarterbacks drafted with first-round picks. BetMGM currently has the over listed at +285 odds and the under at -140.

Another example of NFL Draft totals is the over/under on where a specific player will be drafted. For instance, BetMGM has Garrett Wilson at an over/under selection of number 9.5. The odds on this one are close to even money, and you would need to decide whether Wilson is selected over (tenth overall or later) or under (selections one through nine) this total to win your bet.

The best way to understand NFL Draft betting props is to know that these wagers usually involve deciding where a specific player is drafted or the first player selected from a specific position.

BetMGM has a “first wide receiver selected” prop bet, with players like Garrett Wilson (-157) and Drake London (+350) available for prop betting. Similar to the over/under markets, there are a ton of NFL Draft betting props to choose from at every sportsbook.

As a sports betting event that’s only offered in certain states, sportsbooks typically don’t offer many NFL Draft promos. Having said that, any new customers can register and claim the best sign-up bonuses sports betting sites have to offer.

For example, FanDuel has a welcome promo for a No Sweat First Bet that’s worth up to $1,000 in site credit. Just sign up with FanDuel, make your first deposit, and place a wager on the NFL Draft. If it happens to lose, you’ll have the value of your bet refunded up to $1,000 in bonus cash. You don’t want to miss out on one of the most valuable FanDuel promos for the NFL Draft.

Caesars Sportsbook has an even more lucrative sign-up offer you could use for the NFL Draft. It works just like the FanDuel offer described above, however it’s worth up to $1,100.

Line shopping for the best NFL Draft odds is an important part of wagering on this event, and Caesars Sportsbook has lines that are competitive with the other major sportsbooks.

They have Desmond Ridder to go ninth overall at +3500 odds, which might be a longshot opportunity to make some money as the Seattle Seahawks are set to draft ninth. The Seahawks are hungry for a quarterback after trading away Russell Wilson, but other better quarterbacks will likely be on the board at this point. It’s a risky wager, but it could happen if there’s an unexpected run of Quarterbacks in the top 8.

A successful prop bet of $100 for Desmond Ridder to go ninth overall would win you $3,500 from Caesars Sportsbook. Whether it’s this wager or any other, Caesars Sportsbook is a fantastic choice for NFL Draft betting.

Where Can I Bet on the NFL Draft?

The states and sportsbooks where you can bet on the NFL Draft differ depending on where you’re located. Some states don’t allow NFL Draft betting at all, but we’ll get to that in just a second.

Here are the states where you can bet on the NFL Draft online and some of the best sportsbook apps offered in each:

As you can see, Caesars Sportsbook, FanDuel, DraftKings, and BetMGM offer NFL Draft betting lines in most of these eligible states. Make sure you register with these sportsbooks if you haven’t already and claim some sign-up promos before the NFL Draft gets underway.

Can I Bet on the NFL Draft From My State?

Not every US state allows betting on the NFL Draft. It all depends on how each state classifies the NFL Draft, and states like Pennsylvania simply do not consider it as a sporting event.

These specific states do not allow betting on the draft:

NFL Draft betting can also be limited in the states that do classify it as a sporting event. For example, Michigan and West Virginia stop accepting wagers the night before the NFL Draft. Nevada also stops accepting wagers a full 24 hours before the start of the draft.

Live betting also comes with some specific restrictions in certain states. For example, New Jersey only allows NFL Draft live betting during the first round exclusively. Arizona doesn’t allow live wagering on the NFL Draft in any capacity due to concerns over insider information leaking.

While there are many ways to bet on the NFL Draft, it can be limited depending on what state you’re wagering from. With a lack of NFL betting since the conclusion of Super Bowl 56, this is a perfect way to get right back in the action if you’re eligible.

If you’re looking for a unique way to enjoy the draft, make sure you check out our NFL Mock Draft Contest using the printable template.

As one of the most unique events in all of sports betting, you might have some more questions for how to bet on the NFL Draft. Here’s a quick rundown of NFL Draft betting FAQs:

Can I bet on the NFL Draft?

Yes, in most cases you can bet on the NFL Draft, unless you’re in a state that prohibits this kind of wagering.

Where can I bet on the NFL Draft?

You can bet on the NFL Draft in eligible states like New Jersey, Michigan, Indiana, Colorado, and Tennessee. Sports betting sites like FanDuel, DraftKings, Caesars Sportsbook, and BetMGM accept wagers on the NFL Draft.

Can you bet on the NFL Draft in Virginia?

No, you cannot bet on the NFL Draft in Virginia.

Is it legal to bet on the NFL Draft?

Yes, it is legal to bet on the NFL Draft as long as you’re in an eligible state and wagering with a licensed sportsbook.

What NFL Draft markets can I bet on?