How to Bet on WNBA Games: Your Complete Guide 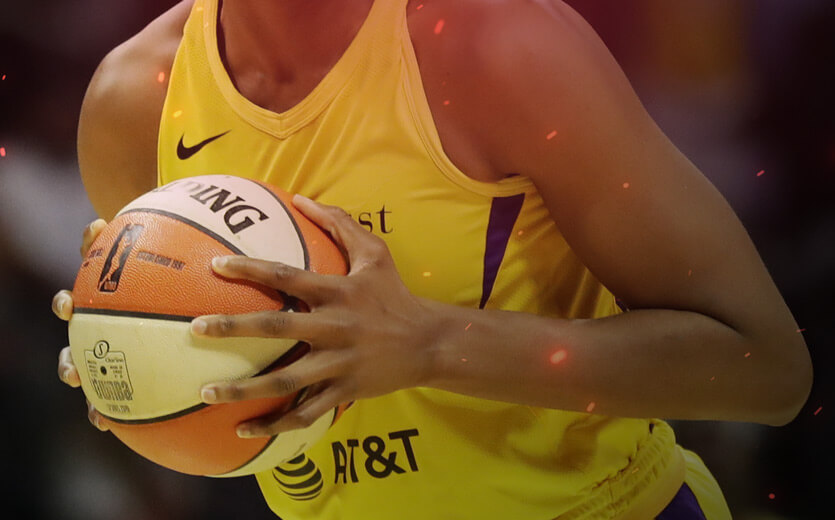 Did you know that basketball bettors have the luxury of wagering on games year-round? Some fans fail to realize that you can bet on WNBA games when the NBA and college basketball aren’t in season.

Heading into its 25th season in 2021, the WNBA is the world’s best and most popular women’s basketball league.

Sports fans who want to #BetOnWomen will be pleased to know there’s plenty of value to be found by betting on WNBA games.

This comprehensive WNBA betting guide will explain how to bet on WNBA games, including the bet types available, WNBA betting angles, where to find WNBA betting information, and more.

Ways to Bet on the WNBA

Betting options for the WNBA are more limited than the NBA. You’ll be hard-pressed to find as many props and live bets available for the WNBA as you would typically see for the NBA and men’s college basketball. That said, the league’s popularity is growing, and several top online sportsbooks are catching on.

Here are the most common ways to bet on the WNBA:

Read on to learn more about each of these common WNBA bet types. If you’re already familiar with them, click here to skip ahead.

Betting on the moneyline is the simplest way to get in on WNBA action. As with any other moneyline bet, you’re trying to pick which team will win the game outright. Betting on the favorite will require you to risk more money than you stand to win, whereas betting on the underdog offers a higher potential reward for the same stake. 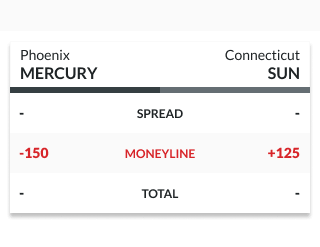 Remember, when betting on the moneyline, the margin of victory does not matter.

Check out our complete guide to moneyline betting for an in-depth look at this type of wagering.

When you bet on the WNBA point spread, you can choose either team at even or close to even odds, typically around -110. The point spread is all about leveling the playing field between two mismatched teams, and the margin of victory determines the outcome of your bet.

For example, if the Las Vegas Aces beat the Los Angeles Sparks by a final score of 90-85, but you had the Aces at -6 on the spread, your bet would be graded a loss. In this instance, the Sparks (+6) lost the game, but they’ve covered the spread. 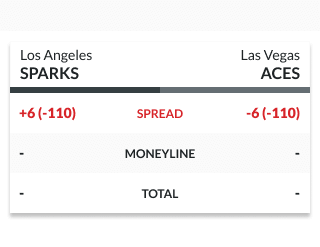 Had the Aces won by six points in our example, your bet would be graded a tie, also known as a “push.” Most sportsbooks try to avoid the possibility of a push, which is why you’ll often see spreads use half points, called a hook.

For more information, refer to our guide on all things spread betting.

The third wager type you’ll often see when betting on WNBA games is a totals bet. Also known as the over/under, totals bets are based on the combined score of both teams at the end of the game.

Totals bets are great for games when you don’t have a solid feeling about either team’s chances of winning. Instead of picking a winner, you must decide whether the two teams will combine to score more points (over) or fewer points (under) than the total posted by the sportsbook. It doesn’t matter who wins. 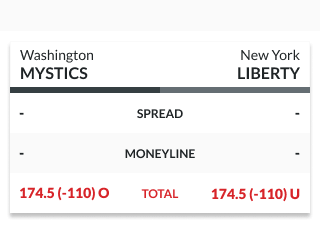 Prop bets are fun wagers that don’t have to do with the game’s outcome but rather on individual performances, key statistics, or specific happenings within the event.

Prop bets are exceptionally popular during the Super Bowl, but online sports betting sites are offering an increasing variety of prop bets for regular-season NFL, NBA, NHL, MLB, and NCAA games as well.

You likely won’t find as many prop bets for WNBA games as you would for an average NBA game, but you can usually wager on star players’ performances. For example, you might bet on whether Breanna Stewart scores over or under 20.5 points in the Seattle Storm’s next game against the Chicago Sky.

You’ll also find WNBA Draft props, including lines on which player will be selected with the first overall pick. The 2021 WNBA Draft takes place on April 15, so be sure to read up on the needs of the team with the first pick (the Dallas Wings) and projected first-round selections.

Most prop bets are structured as over/under wagers or yes/no outcomes. Your sportsbook will define your options clearly and include the payout on all available outcomes.

The most widely available WNBA futures bet is on the WNBA Finals. You can bet on which team you think will win the next WNBA Championship long before the season begins.

Shortly after the Seattle Storm won the WNBA Finals in 2020, the 2021 WNBA Championship futures odds were released.

Most sportsbooks also offer other WNBA futures bets closer to the start of the season. You can bet on who will take home the WNBA MVP Award, for example. Check out our full guide on how to bet on WNBA MVP.

Futures bets are a lot of fun and can potentially be quite lucrative, but we must caution you that the juice is often high with these wagers. Please see our comprehensive guide for a detailed look at the pros and cons of futures betting.

Betting on the WNBA is a lot like betting on the NBA, but with a few important differences. Here are the key things to keep in mind when comparing NBA vs. WNBA odds.

The WNBA has Fewer Teams, Smaller Rosters, and a Shorter Season

The WNBA features 12 teams compared to 30 in the NBA, and each team plays 34 games in the regular season instead of 82. This means there’s less room for error. In the WNBA season, each matchup is that much more important for a team’s overall ranking.

Further, WNBA roster sizes are limited to 12 players, as opposed to 15 players in the NBA. This affects team depth charts, and injuries to star players can be particularly devasting as a shorter season leaves less recovery time.

There’s also ample opportunity for big upsets in the WNBA playoffs, particularly as the first two rounds are single-elimination games. From there, the semi-finals and finals are each decided in a best-of-five series.

Sports bettors should note that WNBA games have four ten-minute quarters. Forty minutes of basketball instead of 48 minutes like the NBA means fewer scoring opportunities. This point is especially relevant to bettors looking to bet on game totals or individual player props.

While the league is growing in popularity, the betting volume on the WNBA remains relatively low. Bettors can find valuable wagering opportunities because the oddsmakers pay less attention to smaller markets.

Looking to build your WNBA betting strategy? There’s no golden rule to making a profit, but following these three tips will help you get started.

#1: No Need to Bet Against the Public

Instead, watch out for opportunities to capitalize on reverse line movement. When the line moves in the opposite direction of overall betting percentages, it’s usually an indication of sharp action.

Big underdogs have historically been undervalued in the WNBA and perform remarkably well against the spread, especially when playing on the road. This presents an opportunity to buy low.

Furthermore, if a team with a bad record is coming off a win, oddsmakers have low expectations of them performing well in consecutive games. Such instances could be another good opportunity to take the underdog.

#3: Know When to Bet the Under

Sports fans usually want to see high-scoring games, which is why the public tends to favor betting the over. Betting the under is often a smart play, but it is particularly so when both teams are coming off hitting the over in their previous games. Betting sites take advantage of the public’s recency bias and usually inflate the line when teams go over.

That said, certain WNBA teams in the past have tended to continue hitting the over for extended periods. For example, the Seattle Storm went over the total seven times in their final ten games en route to winning the 2020 WNBA Championships.

This impressive run highlights how important it is to do your research before laying down your hard-earned cash. Overall, your chances of success are higher when betting on the WNBA than the NBA if you’re willing to put in the time to learn the league. Let’s look at where you can go to get up to speed.

Where to Find WNBA Betting Information

The biggest key to a successful WNBA betting strategy is to do your homework. Sportsbooks are slower to adjust betting lines, which can provide an edge to those who keep up with WNBA news.

Unfortunately, women’s sports receive about four percent of sports media coverage in the United States, and not all WNBA games are broadcast beyond their local markets. You may have to dig a little deeper to find reliable information, but in our experience, it’s been worth the effort.

Aside from visiting WNBA.com, here are some suggestions for where to find WNBA betting information and advanced stats.

WNBA Twitter is both highly entertaining and a great resource for the latest news. In addition to the social media accounts for the websites listed above, we recommend giving each of these individual accounts a follow:

These accounts are held by knowledgeable sports journalists who cover the league extensively. Several have dedicated WNBA newsletters and podcasts you can subscribe to. You can also keep up to date with the latest WNBA betting trends and odds right here at SportsBettingDime.com.

Wondering where to legally bet on the WNBA? Look no further. Our reviewers have spent countless hours evaluating the best online sports betting sites. Here are our top six recommended sportsbooks for betting on the WNBA.

We’ll update this list as top sportsbooks continue to expand their WNBA offerings.

Your Source for Basketball Betting

Now that you have a sense of the unique considerations you should make when handicapping the WNBA, it’s time to take a look at the odds and get ready to place your bets.

Sports Betting Dime is here to help you bet with confidence every single time. To learn more about betting on the WNBA and basketball in general, check out our How to Bet on Sports section.