WNBA MVP Betting: Everything You Need to Know 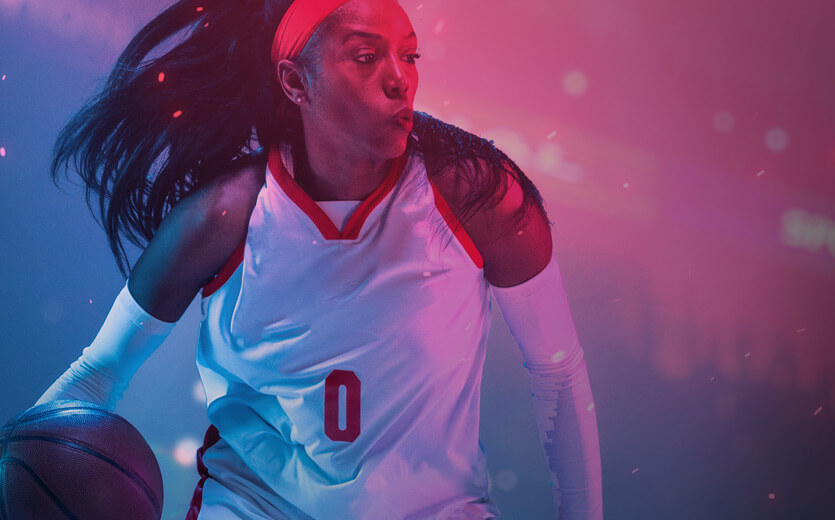 Placing a wager on who you think will win the WNBA MVP award is a fun way to get in on WNBA action. Now in its 25th season, the league is growing in popularity and fan engagement, prompting sportsbooks to offer more and more lines on WNBA games and postseason awards.

You can bet on who will be chosen as Most Valuable Player before the season even begins. This is known as a “futures” bet because your money is laid down on an outcome far in advance.

As with most futures wagers, WNBA MVP betting can be highly rewarding, especially if you pick the eventual winner before the season starts or their odds begin to shorten. That said, be warned that player futures are difficult to handicap.

Before you put money down, let’s discuss when and how to go about betting WNBA MVP futures and unique considerations to keep in mind.

The WNBA Most Valuable Player award is handed out annually to the league’s top player. The recipient is chosen by a panel of sportswriters and broadcasters across the nation.

Voting for the MVP award takes place immediately following the regular season, with panelists asked to select their top five choices in order of preference. Players are given points based on those selections. Here’s the breakdown of points received by voting order:

Next, let’s look at when you can expect to find WNBA MVP lines available.

When Are WNBA MVP Bets Available?

In 2021, the first sportsbooks to provide WNBA MVP lines released opening odds in the week or so leading up to the regular season.

This is a bit different than MVP lines in other major leagues. For example, you can often bet on the next season’s NFL MVP the day after the Super Bowl. As the WNBA continues to gain new fans, expect sportsbooks to begin releasing opening odds farther in advance of the season tip-off.

When Should I Bet on the WNBA MVP?

Futures odds can and do shift frequently and significantly throughout the season. Figuring out the best time to place your wager on the WNBA MVP depends on your objective and ability to spot valuable lines.

That said, generally speaking, the farther in advance you make your WNBA MVP wager(s), the greater the payout if you pick correctly. More information becomes available with each game played, so betting lines on MVP favorites typically trend shorter and shorter as the season progresses.

Whether you want to bet on a favorite or back a longshot, doing your homework in the WNBA offseason and placing your bet(s) early is the key to optimizing your return. This will give you a player to follow all season long and also allow you to hedge your bet later if you’re so inclined.

As a quick example of how fast and how much MVP odds can change, let’s explore the 2021 WNBA MVP odds of Sabrina Ionescu. In early May 2021, you could pick Ionescu to win MVP at +5000. A $10 wager at that time would payout $500 if she goes on to win MVP. There were more than a dozen players with shorter odds than the second-year guard.

Less than two week later, Ionescu had opened the season with a buzzer-beating game-winner for the New York Liberty and become the youngest player in WNBA history to notch a triple-double. As such, her MVP odds skyrocketed to +500, placing her within the top five candidates early on.

The point here is not to say Ionescu will win the award, or that you should wager on every long shot early on. It’s just to say things move quickly in the sports betting world, so you have to act fast when you find value. Of course, only one player can take home MVP, and it’s important to keep in mind your money is laid down for a long time with futures odds. Never bet any money you can’t afford to lose!

Who Wagers on WNBA MVP Futures?

In most markets, sharp bettors avoid futures bets for two reasons. One, they’re difficult to handicap, and two, there’s usually a lot of juice built in.

However, not only are futures bets a lot of fun, but WNBA lines can be extra rewarding for those willing to do their research. Sportsbooks don’t scrutinize these odds as much as they would for NBA or NFL lines, for example, so they might be a bit slower to adjust the lines.

Luckily for you, there are fewer players to research when handicapping the WNBA. The league has just 12 teams with 12 players each. 144 is a much smaller number than the 400+ guys on an NBA roster at any given time, let alone the NFL. If you’re not sure where to get started, we put together a list of useful resources in our WNBA Betting 101 guide.

How to Be Successful with WNBA MVP Betting

There’s value to be found with WNBA MVP futures betting. Here are some general tips to help you be successful with your MVP picks:

Lastly, remember that line shopping is always key, but especially so with futures betting. WNBA MVP odds can vary significantly from sportsbook to sportsbook. Once you have a player in mind, find the betting site that offers the longest odds to get the highest payout.

Here’s a snapshot of how sportsbooks will display WNBA MVP futures odds: 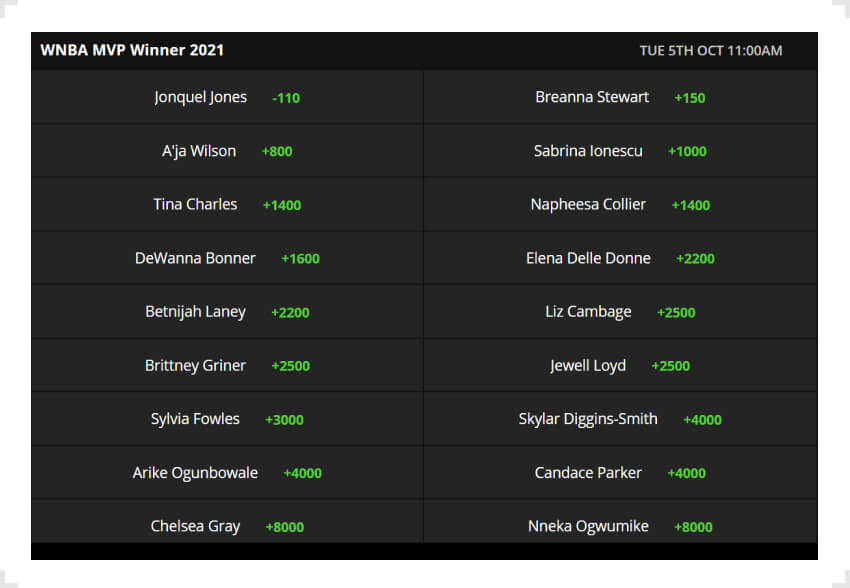 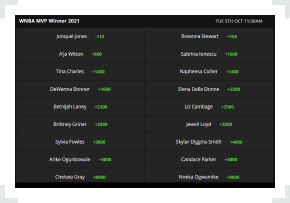 There will typically be at least 30 or 40 options listed. If for some reason you can’t find a line on the player you think will win MVP, let your sportsbook know and they’ll usually provide one. With the legalization of Connecticut online sports betting on the horizon, wagering on forward Jonquel Jones doesn’t seem like a bad idea with the current season she’s enjoying as a member of the Connecticut Sun.

Looking at the past 24 winners of the WNBA MVP award can glean some valuable insights.

Here are some important things to consider when placing your wager.

Below is the positional breakdown of the 24 previous award winners from 1997-2020.

The MVP has historically most often been given to a player who spends at least some time as a forward.

In the history of the WNBA, no player representing a team with a losing record has been named MVP. In fact, only four times has someone won it while playing on a team that finished with a winning percentage below .600. Fifteen of 24 WNBA MVP winners played on teams with a .700 or higher regular season record.

If your pick for MVP doesn’t play for a team that looks to be elite this season, it might be wise to reconsider or make a hedge. Ten of the past 24 MVP winners went on to help their team to a WNBA Championship in the same season, including a string of four in a row from 2016 through 2019.

There are four WNBA franchises – three current and one former – that have won multiple MVP awards.

Incredibly, the Sparks won a quarter of all MVP awards in the first 24 years of WNBA action. The Comets were a dynasty early on as well and it’s unfortunate they couldn’t find owners to keep them in Houston. On the flip side, here are the franchises existing in 2021 that have never had a player take home MVP.

Of the three teams listed above, only the Liberty were amongst the league’s founding franchises.

WNBA MVPs and the WNBA Championships

In case you’re wondering, here’s a complete list of players who won MVP and a WNBA Championship in the same year.

It’s worth noting here that in the past eight years, only one “new” WNBA Champion has emerged. While there’s only 12 teams in the league currently, there are several who have never won a championship. To learn more about this and other interesting developments, check out our guide to WNBA betting trends.

WNBA MVP betting can be highly rewarding, but even when it isn’t, at the very least it’s entertaining. Here are some interesting facts you can use next time you’re debating the MVP race with your friends. 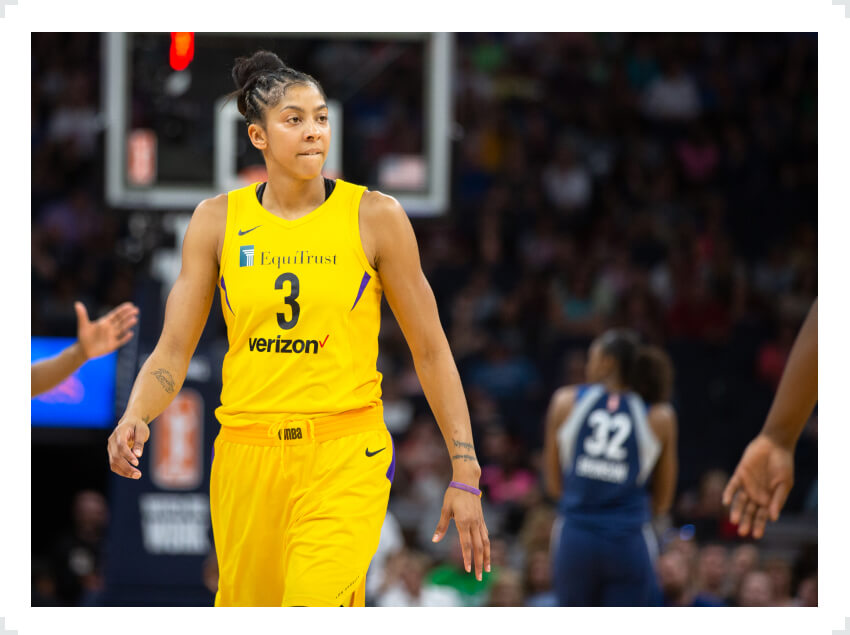 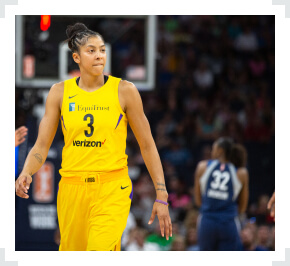 Unfortunately, not every sportsbook has WNBA MVP lines. In our experience, the best places to look are DraftKings, PointsBet, and Unibet. DraftKings has expanded its women’s basketball offerings recently, and PointsBet became an official partner of the WNBA in spring 2021.

Now that you know all about the WNBA MVP award, you’ll want to monitor the odds before and after you place your wager.

Sports Betting Dime’s editorial team will provide regular updates on the WNBA MVP race all season long. Plus, our WNBA Championship Odds Tracker can help you evaluate how teams’ chances of winning it all are shifting over time. Our odds trackers aggregate odds from the top sportsbooks in America, so you’ll get an objective take on which team is favored to win the title.

You can find tips and tricks for WNBA betting and more in our ‘How to Bet on Sports’ section.