A berth in the NCAA tournament is on the line when Winthrop (23-10, 15-3 Big South) hosts Hampton (15-18, 8-10 Big South) in the Big South title game on Sunday (March 8, 1 pm ET) at the Winthrop Coliseum. The Eagles, who are the two seed, knocked off defending champions Gardner-Webb in the semifinals, while the Pirates upset top seed Radford.

Winthrop has won its first two games of the tournament by an average of 24 points, and opened up as a 13-point favorite over Hampton.

Winthrop was a strong bet to advance to the conference championship game, but the same cannot be said for Hampton. The fifth seeded Pirates were +4000 to win the Big South Tournament before action tipped off, and have won outright as an underdog in both the quarters and semis. 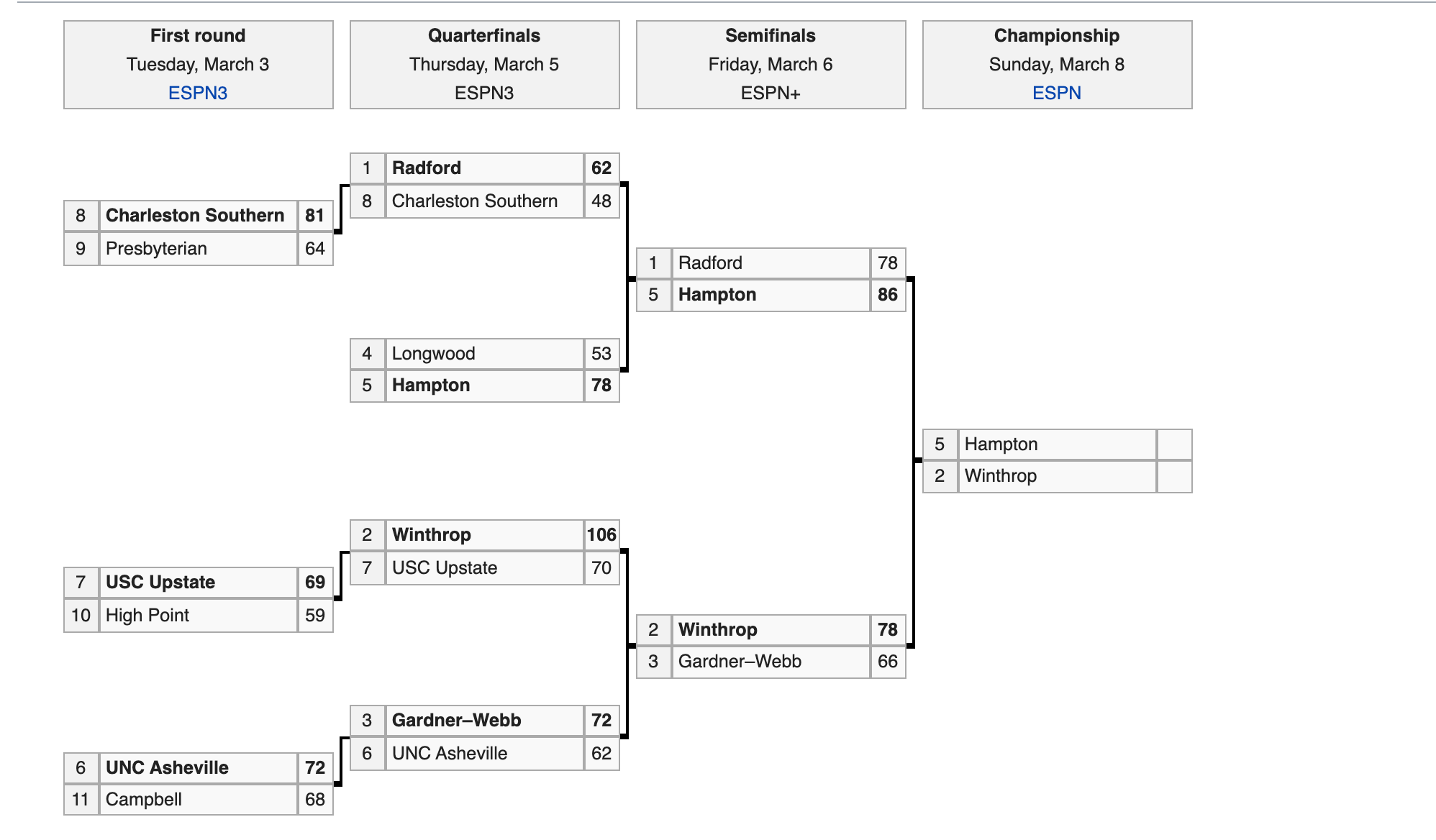 Beware of the Underdog

Hampton’s semifinal victory versus Radford was not something the public saw coming. The Pirates were 10.5-point underdogs to the top seed, but wound up cruising to an 8-point victory.

Marrow and teammate Ben Stanley make up arguably the best 1-2 scoring punch in the country, ranking third and eighth respectively in points per game in the nation. Stanley chipped in 26 points and 7 boards in the win over Radford, and the two combined for 44 points in their quarterfinal victory versus Longwood.

Stanley torched Winthrop for 31 points in their last meeting two weeks ago, an 87-81 win for the Pirates. The dynamic duo is the key to victory in every Hampton contest, and will need another huge outing to upset the Eagles.

Winthrop owns more Big South titles (11) than any other school in the conference. They finished the regular season tied for the best record (15-3) and stood toe-to-toe with top-5 2020 NCAA Championship odds contender Duke back in November.

They’ve barely broken a sweat through their first two games of the tournament, beating South Carolina Upstart by 36 and Gardner-Webb by 12. Three Eagles scored in double-figures against the Bulldogs, led by Hunter Hale’s 28 points. They boast the Big South’s top offense, leading the league in points per game, rebounds and assists.

They’ll have no problem scoring against the Pirates conference worst defense, but can they contain Marrow and Stanley? Winthrop has surrendered 111 points in two games to Marrow and Stanley, and struggle defending inside which is where Stanley does his best work.

It’s very tempting to back the underdog Pirates, but there’s a lot working against them. This game will be played on Winthrop’s home floor and Hampton won just three road games all season.

The Pirates have little hope of slowing down the Eagles conference best offense and will need to rely on Marrow and Stanley even more so than usual. That’s where fatigue could become a factor.

Jermaine Marrow scored 68 points in the two #BigSouthMBB games in Radford, hitting 12 3-pointers and has more than 2,600 career points. He's also played all but eight minutes in Hampton's last 11 games. Played all 40 in the semifinal upset of Radford.

Both Hampton stars played all 40 minutes on Friday versus Radford, and 37 and 35 minutes a piece in their quarterfinal win. At some point, their legs are going to get tired, and if they slow down even a bit, Winthrop could run away with their 12th Big South crown.