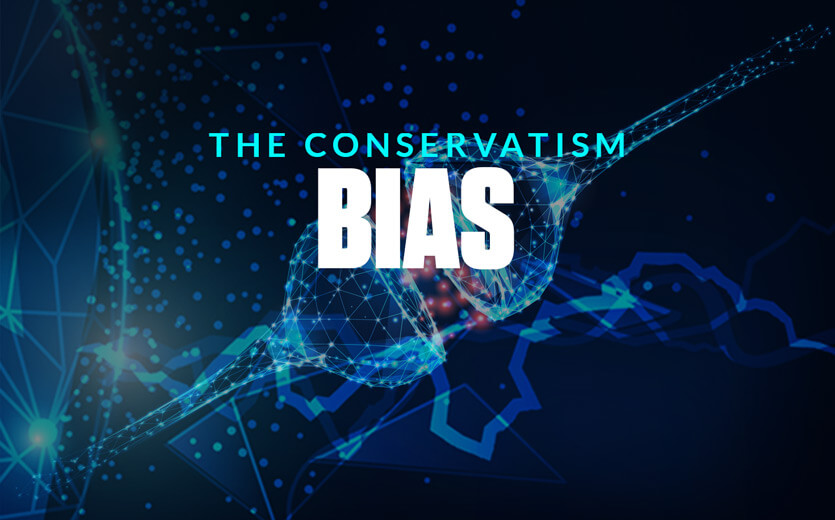 Do you find it difficult to incorporate new information into your analyses? Is it much easier to accept information that confirms your preconceptions? If you do, you’re likely falling victim to the conservatism bias.

What Is the Conservatism Bias?

When people continue to hold their prior views – without properly integrating new information that’s been presented to them – it’s referred to as the conservatism bias.

Our original opinions and the information we initially process is usually more meaningful than information that comes afterward. Sometimes, we’ll partially consider new information, and other times not at all.

Consequently, the conservatism bias makes us more likely to act on old, outdated information, rather than fully grasping and taking action on new, applicable information that conflicts with our pre-existing views.

The conservatism bias is especially likely to rear its hard when new information is difficult to process or hard to understand.

What Happens When We Suffer from the Conservatism Bias

Humans don’t like admitting when we’re wrong, and we especially don’t like putting in the hard work to understand and process complex information.

We choose to cling to both the information and the sources we first acknowledged, because exerting the additional effort to reconcile the differences between the old and the new is, well, painful and uncomfortable.

Of course, this is a totally irrational strategy to make accurate decisions.

Does This Sound Familiar?

The conservatism bias falls into a broader category of cognitive errors that affect our decision-making process.

When Was the Conservatism Bias Proven?

The conservatism bias was proven in 1974 by Daniel Kahneman and Amos Tversky.

Of course, without drawing any of the chips (or having any information about the bags revealed), it would be logical to assume that the chances of picking the mostly-red bag or the mostly-blue bag were 50% each.

When asked, subjects updated their beliefs slightly but conservatively, thinking that there was a 70% chance that their bag was the predominantly red one. This was a flawed assessment.

The real answer – when factoring in the draw of 8 red chips and 4 blue chips – is that there was a 97% chance the experimenter was drawing from the red bag.

As such, Tversky and Kahneman theorized that people clung to their original belief of a 50% probability, and were overly-conservative in their new estimates of choosing the red bag. The research duo labeled this tendency “the conservatism bias”.

What are Common Manifestations of the Conservatism Bias?

There’s a plethora of evidence that suggests investors regularly underreact to things like earning announcements, dividends, and stock splits.

When traders do integrate new information, those suffering from conservatism bias tend to react much more slowly. They have a tough time figuring out how to incorporate pertinent information into their future plans of action.

How Does the Conservatism Bias Affect Sports Bets?

It isn’t hard to imagine how the conservatism bias might affect our betting strategies.

Say that you’ve placed a reasonably large bet on the Patriots to beat the Rams. You’re supremely confident in your selection, but two hours before game time, it’s revealed that Tom Brady isn’t the starting quarterback.

If you’re afflicted by the conservatism bias, you might react slowly to this new information. You may even try to rationalize it by touting the strengths of a well-rounded Patriots squad.

In all likelihood, the correct play would be to hedge your bet to reduce potential losses. After all, the Patriots’ star quarterback makes them the likely losers in this scenario.

Of course, it’s intuitively easier to dismiss the loss of Brady as inconsequential. If you’re going to grow your bankroll, however, it’s essential to face reality and absorb all the relevant information. Your success depends on it!

How Can We Fight Against the Conservatism Bias?

The key to combating the conservatism bias is simple. We need to act quickly, efficiently, and be more than willing to delve into the more complex aspects of our sports bets.

A “sharp” constantly reassesses their bets and positions and never gets wedded to one particular way of doing things. Take advantage of tools like SBD Sharp, which provides simple visualizations of complex data regarding a team’s past performance in specific situations.

Remember: If new information is hard to understand, explain, or verify, you should simply assume it’s critical information. Of course, this can be hard to do when so much information is flying at you, but it’s absolutely integral to becoming a stronger bettor.

It’s hard work, fighting against the many cognitive traps that all bettors fall into. That’s why we created an entire section centered around betting psychology.

There, you’ll find a whole host of common cognitive biases that even the best bettors fall prey to, and the best methods to combat them.