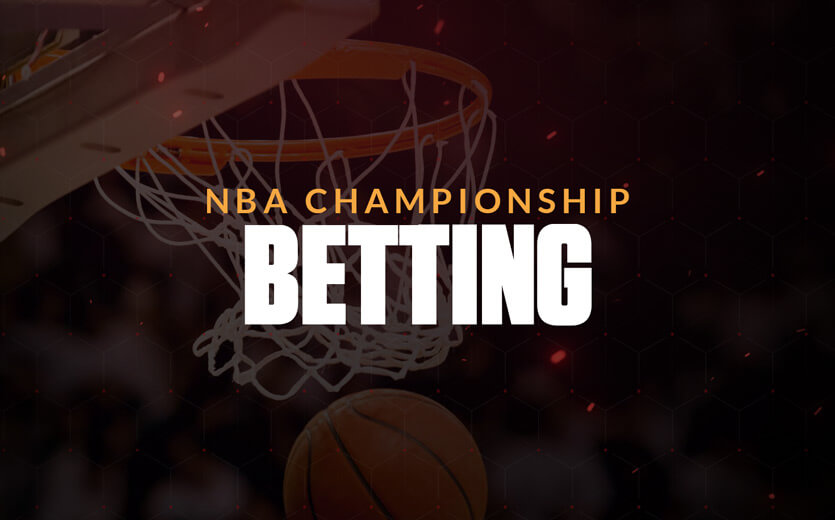 Betting on the NBA playoffs provides endless entertainment for basketball fans and dedicated sports bettors alike. As the culmination of one of the longest seasons in professional sports, the NBA post-season generates a great deal of fanfare and public conversation. From the first round all the way through to the NBA Finals, the best-of-seven elimination format provides uniquely valuable opportunities for bettors with the right NBA playoff betting strategy.

Follow this comprehensive guide for expert advice on how to bet the NBA playoffs. We’ll break down the type of bets you can make during the NBA post-season and share tips n’ tricks that will help you formulate the best strategy for betting on the NBA Championships.

Bets Available During the NBA Playoffs

Online betting options during the NBA Playoffs are extensive. Sports bettors can get in on the action with:

We’ll cover each of these in the sections below.

Those who bet on the NBA throughout the regular season will be pleased to find that they can continue to place the same type of bets they’re familiar with during the post-season. Individual games offer bettors familiar options such as selecting the winner of the game straight-up (moneyline), betting on how much they’ll win by (point spread), or taking an over/under wager on the combined score of both teams at game’s end (totals).

Curious about the differences between these bets and looking for an overview of basic strategic considerations for each? Explore our guides covering the basics of NBA betting and how to bet on NBA basketball like a pro.

Each of these series provides betting opportunities not available throughout the regular season. Let’s take a look at some of the most popular options: 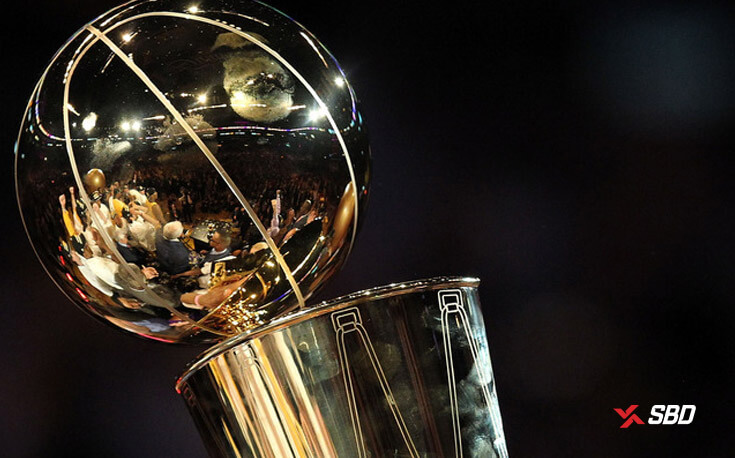 Humans in general–and sports bettors in particular–love to predict the future. No doubt, we all know that one friend who began speculating about next year’s NBA Champion mere minutes after the Los Angeles Lakers took the 2020 title in Game 6. Futures bets provide an intriguing opportunity to capitalize on such predictions, and the NBA playoffs include chances to bet on both conference champions and the overall NBA champion.

Most sportsbooks will open these futures lines well in advance of the playoffs, but it’s not too late to get in on the action even as the playoffs come to a close. That said, it’s worth noting that betting odds become increasingly less favorable as the event in question draws near, so placing your futures wagers early is more likely to lead to a higher payout.

Popularized by the NFL’s Super Bowl, prop bets offer an intriguing alternative to betting on the outcome of a game, series, or championship. Star players are more influential in basketball compared with most other major sports, and many players turn on their best performances during the post-season. This reality makes the NBA playoffs an especially exciting time to wager on individual performances.

The key to enjoying prop bets is shopping around at online sportsbooks for an interesting angle on the game or series that makes it more interesting to watch and provides some value on the line. For more helpful insights on individual awards, check out our guide covering how to bet on the NBA basketball awards.

Live Betting During the NBA Playoffs

The popularity of the modern NBA ensures that most online betting sites have live betting options all season long, but the added importance of playoffs games means there are even more in-play wagering opportunities during the post-season. Live betting is fast and exciting, but keep in mind that the odds change frequently, so you’ll need to act quickly when you see a line you like.

Formulating the best NBA playoff betting strategy doesn’t need to be complicated. The key to success is investing the time to perform detailed research about each team’s strengths and weaknesses and placing this information into the context of the game or series at hand.

That said, there are a few strategic considerations unique to the NBA playoffs.

Home court advantage is widely recognized as a very significant factor in basketball. And while our research suggests home court advantage matters more in NCAA basketball, it remains a hugely relevant consideration when betting on the NBA playoffs. Home teams consistently win more than 60 percent of their regular-season home games, and this trend continues in the post-season with home teams winning nearly 65% of the time.

In the NBA playoffs, home-court advantage is determined in a 2-2-1-1-1 format wherein the higher-seeded team (as determined by regular season win-loss record) plays at home first. This structure gives the theoretically stronger team a leg up out of the gate, and sportsbooks are likely to favor them heavily in Games 1 and 2.

When performing your analysis of an NBA playoff match-up, remember that other bettors and online sportsbooks are placing a great deal of faith in this one factor. You’ll need to decide for yourself how relevant you think it will be, particularly if you think the underdog has a good chance of winning on the road.

Whether it’s the altitude or the electric atmosphere, certain courts seem to provide their teams even more of an advantage. Here’s a breakdown of the biggest home-court advantages in the NBA:

Are you skeptical of the influence of home-court advantage? Let’s take a quick look at one betting strategy developed specifically to exploit the tendency of the public and oddsmakers to weigh it so heavily.

The Zig-Zag Theory: Does it Work?

Anyone who has watched the NBA or NHL playoffs knows that momentum can frequently shift over a best-of-seven series, especially with each player so emotionally invested in the outcome. The zig-zag theory places a great deal of weight on this shifting momentum, suggesting that each game is heavily influenced by the outcome of the game immediately before it.

The theory advocates betting on the team that lost the previous game, as statistical analysis suggests they are more likely than not to rebound and win following a loss. The influence of desperation and desire to survive is often undervalued by sports betting sites and other bettors, who tend to focus on more concrete factors like home-court advantage. The public also tends to overreact to a single game loss, further swaying the line in favor of the previous winner.

The players aren’t the only ones more invested in the playoffs. Because of the intense fanfare that occurs in the lead-up to the NBA Championships, the betting landscape is very different from that of the regular season.

Thanks to a massive infusion of square bettors who don’t follow basketball closely and don’t have a clue how to evaluate odds, the NBA playoffs present particularly ripe opportunities to bet against the public. This can be especially  true for localized sportsbooks. For example, when sports betting is legalized in Canada, bettors up north may want to check out the best sports betting sites Canada has to offer in order to bet against the country’s only team (the Toronto Raptors). It’s likely that the Raptors will be laying more points or getting fewer points on a game-to-game basis compared to US sportsbooks.

Pay attention to public sentiment and media coverage. How might it sway uninformed bettors to take a side not supported by an analysis of each team’s relative strengths and weaknesses? Are trendy underdogs receiving more credit than they’re worth? Are historically successful franchises as strong as the pundits suggest?

Explore popular basketball betting sites to find the lines that have been manipulated by public sentiment and focus on the facts, not the feeling. With a bit of research, it’s easy to find value fading the public.

Who Can Go The Distance?

There’s a huge difference between facing an opponent once and playing against them multiple times in a single week. Teams gain a deeper understanding of their opponent’s strengths and weaknesses throughout a playoff series, and competitive teams need to both adapt accordingly and possess the stamina to maintain their efforts over a drawn-out series or long run deep into the playoffs.

Spend a bit of time analyzing the relative strengths and weaknesses of each team. Ask yourself the following questions:

Ultimately, coaching and injuries matter more in the playoffs than they do in the regular season. Keep an eye out for teams with a deep lineup and dynamic style of play. Playoff games tend to come down to the wire, so pay particular attention to teams with a solid track record in the last two minutes.  Can your pick close as well as the Raptors in Game 6 of the 2019 NBA Championships?

It’s worth noting that since the NBA All-Star Game started in 1951, no team has won an NBA Championship without at least one player who made the All-Star team that season. We won’t count the 1999 San Antonio Spurs because there was no All-Star Game that year due to a lockout.

What’s perhaps even more telling is that few teams have ever won it all without a current or former NBA MVP on their roster. The Detroit Pistons appear to be the only team immune to this rule. Detroit won NBA Championships in 1989, 1990, and 2004 with no MVP winners.

Other exceptions can be included with an asterisk: the 1981 Boston Celtics (although Larry Bird went on to win three NBA MVP awards a few years later) and the 2019 Toronto Raptors, who won with 2014 NBA Finals MVP Kawhi Leonard.

The table below shows the star caliber of recent NBA Champions.

That said, there are some notable MVPs in recent years who have not yet led their team to an NBA Championship. This list includes two-time winner Giannis Antetokounmpo of the Milwaukee Bucks as well as James Harden and Russell Westbrook, who currently play for the Brooklyn Nets and Washington Wizards, respectively.

Ready to Bet on the NBA Playoffs?

Now that we’ve covered the basic types of bets available and strategies to succeed when wagering on the NBA playoffs, you’re likely clamoring to get in on the action. As always, remember that there is no such thing as a foolproof, silver bullet betting strategy when it comes to sports. Do your research, shop for the best lines, and most importantly, keep it fun.