NFL MVP Betting: How to Pick a Winner 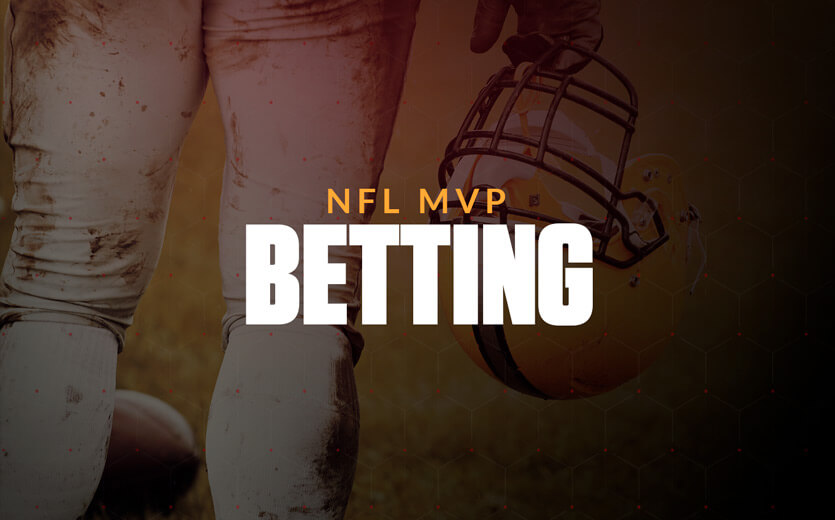 Betting on the NFL MVP winner is one of the most popular football futures bets aside from picking which team will win the Super Bowl.

Futures bets are wagers placed on outcomes far before the event in question. Believe it or not, you can bet on which player will win the NFL MVP Award before the season even begins.

Like most futures bets, NFL MVP bets can be very lucrative, particularly if you pick the right player before the season. However, these bets are notoriously difficult to handicap.

Of course, as the old saying goes: no risk, no reward! Let’s discuss when and how to go about NFL MVP betting and unique considerations you should keep in mind.

While other outlets also recognize the league’s best players, the AP MVP Award is considered the de facto official NFL MVP award and is the most prestigious.

The MVP Award is voted upon by a panel of 50 sportswriters at the end of the regular season. Votes are tallied before the NFL playoffs begin, but the winner is not announced until the night before the Super Bowl at the annual NFL Honors ceremony.

When Are NFL MVP Bets Available?

NFL MVP betting begins long before the season starts. In many cases, you can bet on the next season’s MVP the day after the Super Bowl. Lines are updated weekly right up until the end of the season.

It’s important to note that you won’t be able to bet futures while games are in-play, at least during the first half of the NFL season. Later in the season, the lines stay open unless a game features a team with a top MVP candidate.

NFL MVP betting lines are adjusted and re-opened the morning after Sunday and Monday night games. As such, most people place their MVP bets on Monday or Tuesday mornings during the regular season.

Remember that as with any futures bet, it could be a long time before you get your stake back. Never bet any money you can’t afford to spare!

When Should I Bet on the NFL MVP?

Since you can bet on the NFL MVP from February through December, you’re probably wondering when the best time is to place your wager.

Truthfully, there isn’t a one-size-fits-all answer to this question. It depends on your objective and when you see value in a betting line.

Futures odds, particularly for individual player awards, can shift dramatically throughout a season. Generally speaking, the further in advance you make your futures bet, the higher the payout.

Most people who bet futures place their wagers around major events. Popular times to bet on the NFL MVP include shortly after the Super Bowl when lines for next season open, during free agency and the NFL draft, at the start of training camp, and right before the regular season begins.

Once the season starts, more information becomes available with each game, and lines of MVP favorites trend shorter and shorter. By week 15 or 16, most people have a reasonable idea who the top three or four MVP candidates are, and chances of a player outside of this group winning are slim.

Placing your wager early is the best way to optimize your return.

Example: Betting on the Favorite

Patriots quarterback Tom Brady was the opening favorite to win the 2017 MVP Award. Brady remained so for much of that season and went on to win his third NFL MVP Award.

The table below illustrates how the timing of your futures bet can affect your winnings.

Brady was the odds-on favorite in each of the weeks above (and others), but you can clearly see those who picked him early profited the most on his MVP win.

Example: Betting on a Longshot

If you’re lucky (or smart) enough to spot an early longshot who ends up winning it all, the rewards can be enormous. For example, those who took Patrick Mahomes in 2018 or Lamar Jackson in 2019 at their opening odds eventually walked away with ridiculous payouts.

Similarly, in 2018, eventual MVP Patrick Mahomes opened at +10,000 in April. Mahomes quickly became the favorite in September 2018 when he threw 13 touchdowns in the first three games of the season, an NFL record. But if you bet on him before that, you cashed out big time.

Who Bets on NFL MVP Futures?

Betting on the NFL MVP is a lot of fun and can offer massive payouts for those lucky or skilled enough to cash in.

However, most sharps stay away from futures bets for two primary reasons:

Individual awards can be particularly tough to pick correctly. An MVP candidate can get injured at any point in time, or their team may struggle for reasons beyond their control, which affects their chances of taking home the league’s highest individual award.

Check out our complete guide to futures betting strategy for a deeper dive into the pros and cons of this type of wagering.

How to Be Successful with NFL MVP Betting

Successful betting is all about understanding true probability versus implied probability. There’s value to be found with futures bets, but you can’t just set it and forget it. Don’t fall into the sucker’s trap!

A successful NFL MVP bettor finds value early, then watches the board every week. They may even bet on multiple players, either right when the lines open if there’s enough value or during the season when monitoring lines and deciding it’s beneficial to hedge.

If you choose to bet on multiple players, make sure you understand how much you are risking in total versus the potential payout if your pick wins. Always do the math first! Use the SBD Odds Converter for help calculating payouts.

Lastly, keep in mind that futures lines can vary significantly from book to book. Once you’ve identified a player you think will win MVP, be sure to find the sportsbook that gives him the longest odds – this will provide you with the highest payout.

The table below shows real odds taken from three different sportsbooks in week 14 of the 2020 season. 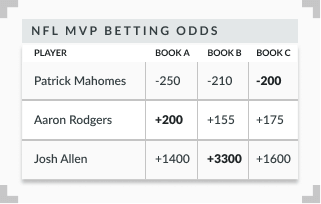 The bolded number shows the best value for each of the current top three MVP candidates. Notice that the best book depends on which player you want to bet on – that’s why line shopping is essential!

The history of the NFL MVP Award can provide some crucial insights when deciding who put your money on. Spoiler alert: the MVP is usually a quarterback on a playoff-bound team.

Defense may win championships, but it’s evident that quarterbacks and running backs reign supreme when it comes to the regular-season NFL Most Valuable Player award. 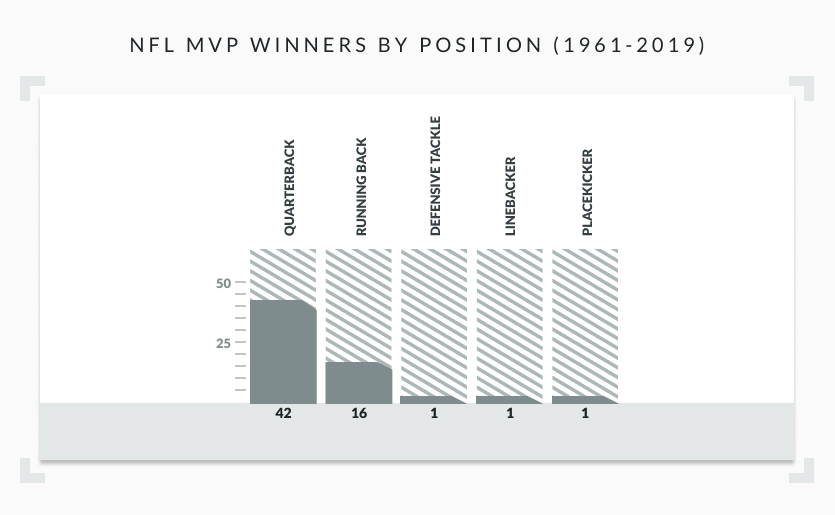 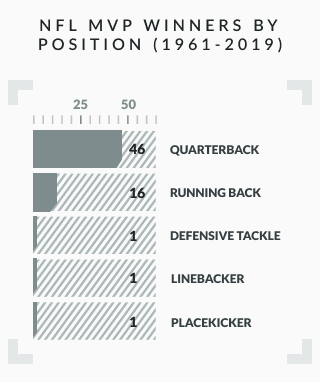 Clearly, voters tend to favor offensive positions. Only two defensive players have ever won the MVP award. Nine of the last 10 winners were quarterbacks. In fact, the last time an NFL MVP winner wasn’t a quarterback or running back was when New York Giants linebacker Lawrence Taylor won in 1986. The only other defensive player to win MVP was defensive tackle Alan Page of the Minnesota Vikings in 1971.

While kickers regularly score the most points on an NFL team, they are rarely considered the most valuable. Mark Moseley of the Washington Football Team is the only placekicker to have won an MVP award. He made a league-leading 20 of 21 field goals in the strike-shortened 1982 season. This 95 percent success rate was an NFL record at the time.

Perhaps even more important than a player’s position is their team’s record. It may sound redundant, but the NFL MVP award represents the most valuable player and is not necessarily synonymous with the best player. Historically, MVP voters favor players on teams that win a lot.

If your MVP pick plays for a team that doesn’t look like it will make the playoffs, you might want to reconsider or make a smart hedge. Only two players have won the award despite their team missing the playoffs, all the way back in 1967 and 1973.

In the past 20 years, every MVP winner played for a team that won at least ten games. Seventeen of the past 20 MVPs won 12 or more games, and eight won 14 or more. The MVP is an individual award, but voters expect candidates to make their teams better.

*denotes franchise that has won a Super Bowl

NFL MVPs and the Super Bowl

Wondering about the chances of an MVP going on to win the Super Bowl (or before 1966, the NFL Championship Game)? That’s occurred 13 times, but not since 1999, when Kurt Warner led the Rams to a championship and took home both the regular season and Super Bowl MVP.

Those interested in Super Bowl prop bets should be aware that only six players have won a regular season and Super Bowl MVP award in the same season:

More recently, winning the MVP has been considered a bit of a curse. Since 2000, nine MVPs have led their team to the Super Bowl but lost the big game.

NFL MVP betting is highly entertaining. You’ll no doubt want to discuss the MVP race with your friends, so let’s finish off with some additional fun facts.

Betting on the NFL MVP? Keep Track of the Odds

Now that you know what to consider when betting on the NFL MVP, make sure you monitor the odds before and after you place your wager.

Sports Betting Dime’s NFL MVP Odds Tracker helps you quickly evaluate how the lines are shifting over time. Our proprietary model aggregates the odds from top sportsbooks, which gives you a composite number that removes the influence that money has on the lines at individual books. In other words, you’ll get a more objective take on which players have the best chances of winning MVP.

Find more tips and tricks for successful NFL betting in our ‘How to Bet on Sports’ section.