The official first round of the 2022 NCAA Tournament starts on Thursday at 12:15 pm ET, meaning you are running out of time to submit your bracket.

The table below provides a high-level overview of everyone’s picks. Full brackets and analysis follow the table. Click on any bracket to expand. 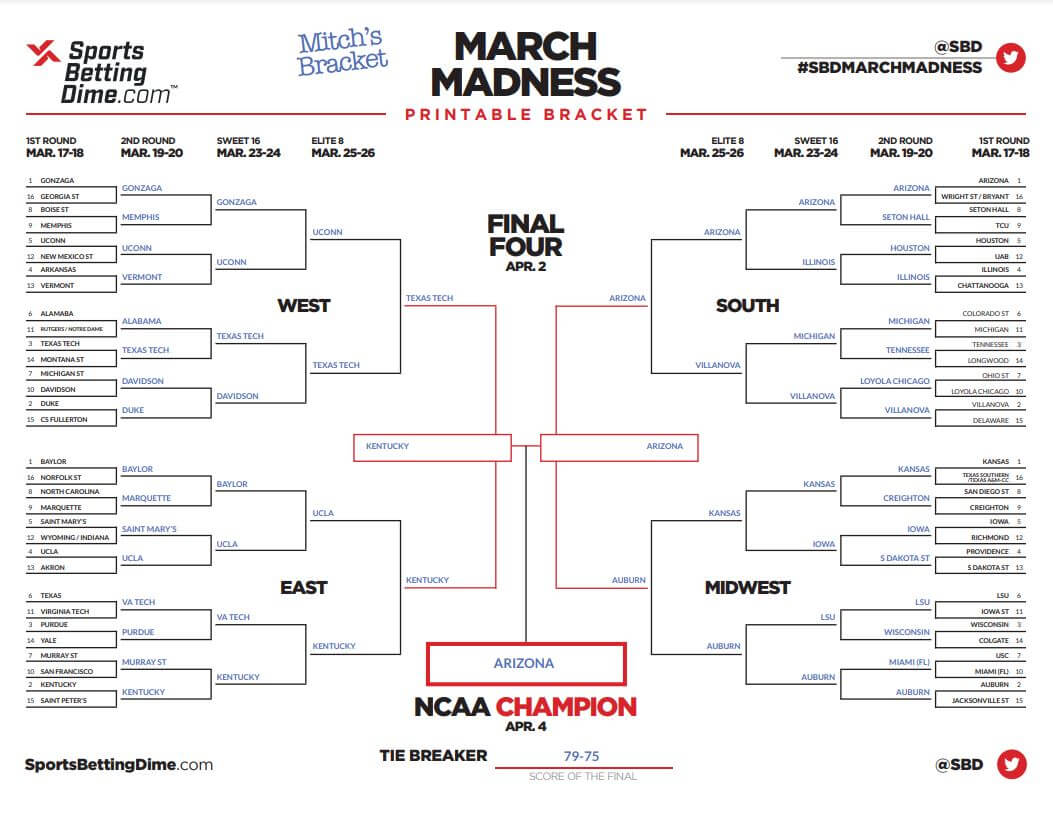 While Kerr Kriisa’s status remains uncertain, Arizona showed no weakness without him and versatile wing Dalen Terry running point. This team stands out to me as the most complete in the sport to me right now, with an NBA wing in Bennedict Mathurin, a deep and versatile rotation of big men who can completely lock down the interior defensively and a firecracker in Kriisa if he returns to the court. Their region sets up well for at minimum an Elite 8 run, and they will deliver the west coast its first title since these same Wildcats won it all in 1997.

Texas Tech would be considered my biggest sleeper pick, sitting at +550 in the Final Four odds. While relying on their offence is going to be a sweat, simply no other team in the region plays with the intensity and relentlessness on D that the Red Raiders do, carrying Mark Adams in to the Final Four in his first year as a HC.

In Buffalo, Vermont should have a distinct crowd advantage for this late tip-off, and the Catamounts couldn’t come in hotter having won their Conference title game by 40+ points. Their three-point shooting (38th in the country) will lead them to an upset over Musselman’s Hogs, who outside of JD Notae can struggle to find reliable offensive production.

While led by the likely #1 pick in Chet Holmgren and possessing the best offensive efficiency in the country via KenPom, I’ve got the Zags as the first #1 seed out to UConn in the Sweet 16. In their three losses this year it has been their guard play that has let them down – and I expect the Huskies group of veteran, defensive minded guards to beat them up enough to seriously affect Gonzaga’s flow on O. Mark Few’s championship drought continues. 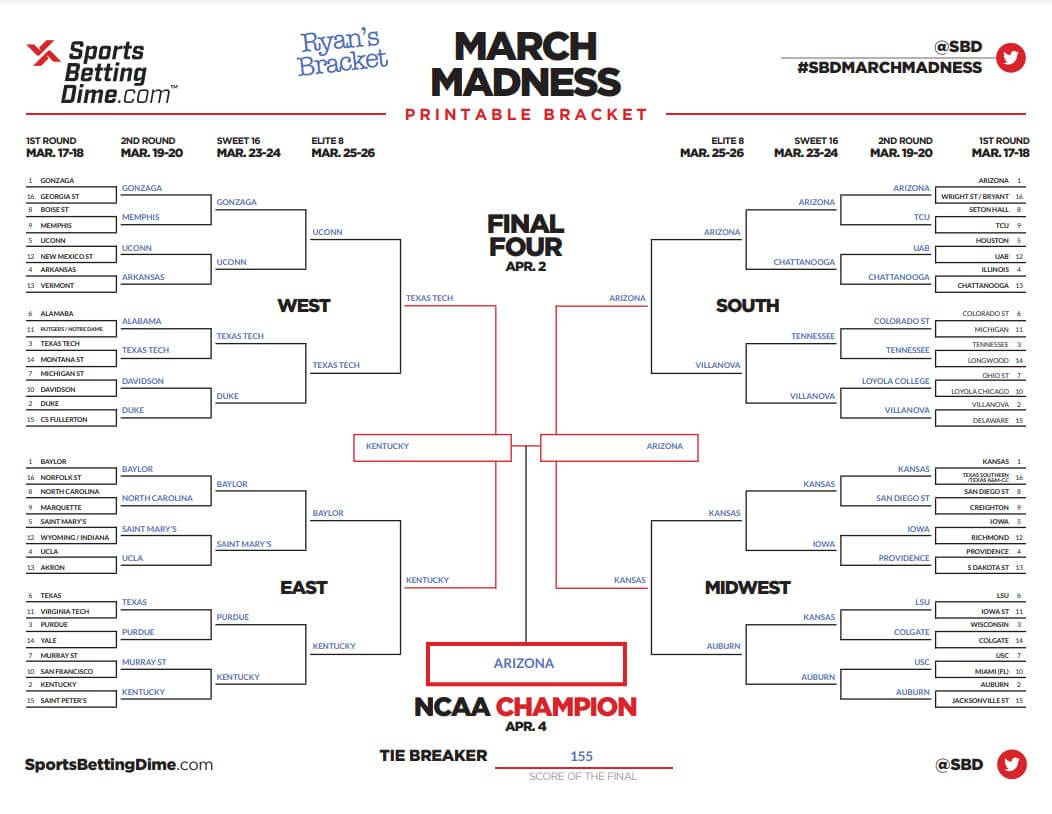 Arizona cruised to an 18-2 conference record (28-3 overall) and followed that up with a Pac-12 tournament title. First-year coach Tommy Lloyd has a great balance in this Wildcats team with an offense that ranks 5th and defense ranking 20th according to KenPom.

Arizona has a star on both ends of the floor with Pac-12 Player of the Year and team scoring leader Bennedict Mathurin and Pac-12 Defensive Player of the Year Christian Koloko. Mathurin was a factor in the Wooden Award odds all year, and both are expected to be first-round picks in this year’s draft. They will lead the Wildcats to their first tournament title since 1997. 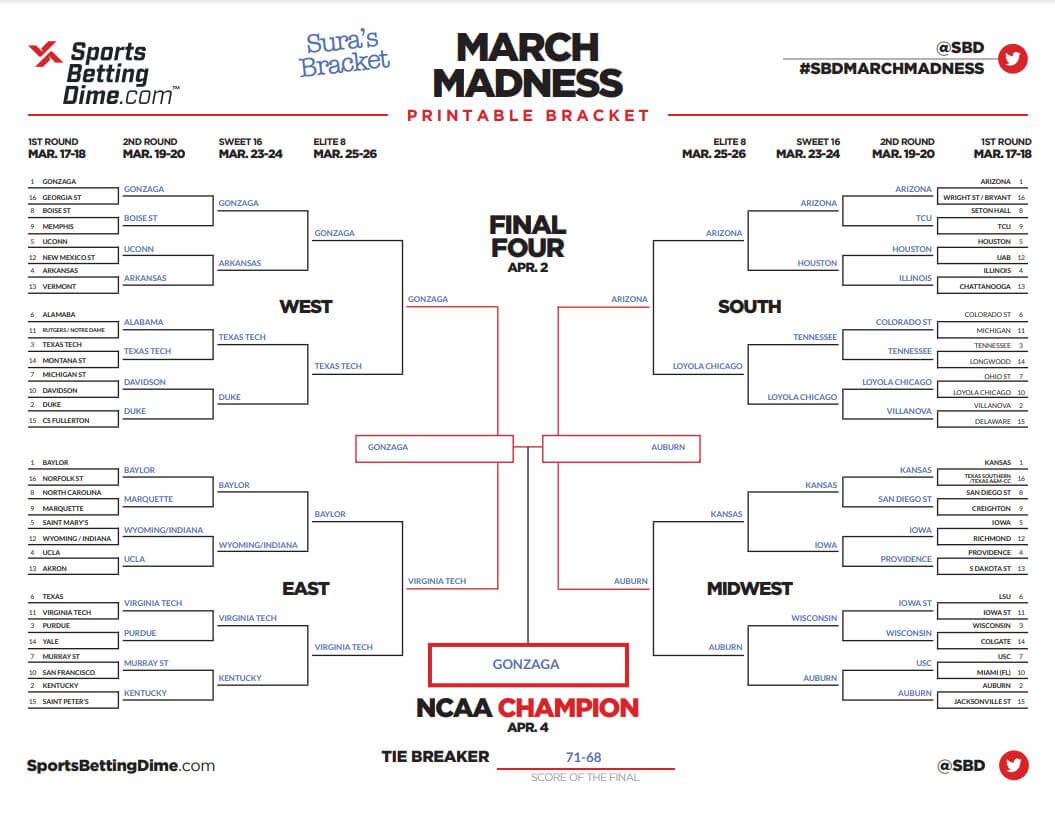 I think the two strongest #1 seeds are Arizona and Gonzaga. That being said, I think Kansas will be the first #1 seed to lose. I think they have some tough teams to face in the Midwest Region.

Apart from their 1 v 16 matchup, they could have their hands full with San Diego State and/or Auburn on their way to the Final Four. Both of those teams rank in the top 10 in Adjusted Defensive Efficiency this season and have some impressive wins on their resumes.

I don’t think this Gonzaga team is as skilled as last year, but I like that they’re not coming into the NCAA Tournament with an unblemished record. There’s less pressure, and this team is REALLY deep. They have five players averaging over 10.0 points per game, along with the No. 1 recruit in Chet Holmgren.

They have one of the top offenses in the country, ranking 1st in Adjusted Offensive Efficiency this year. Their three losses were against Saint Mary’s, Alabama, and Duke, all of which are in the tournament. I think this is the year Mark Few and Gonzaga takes home the Natty Champ. 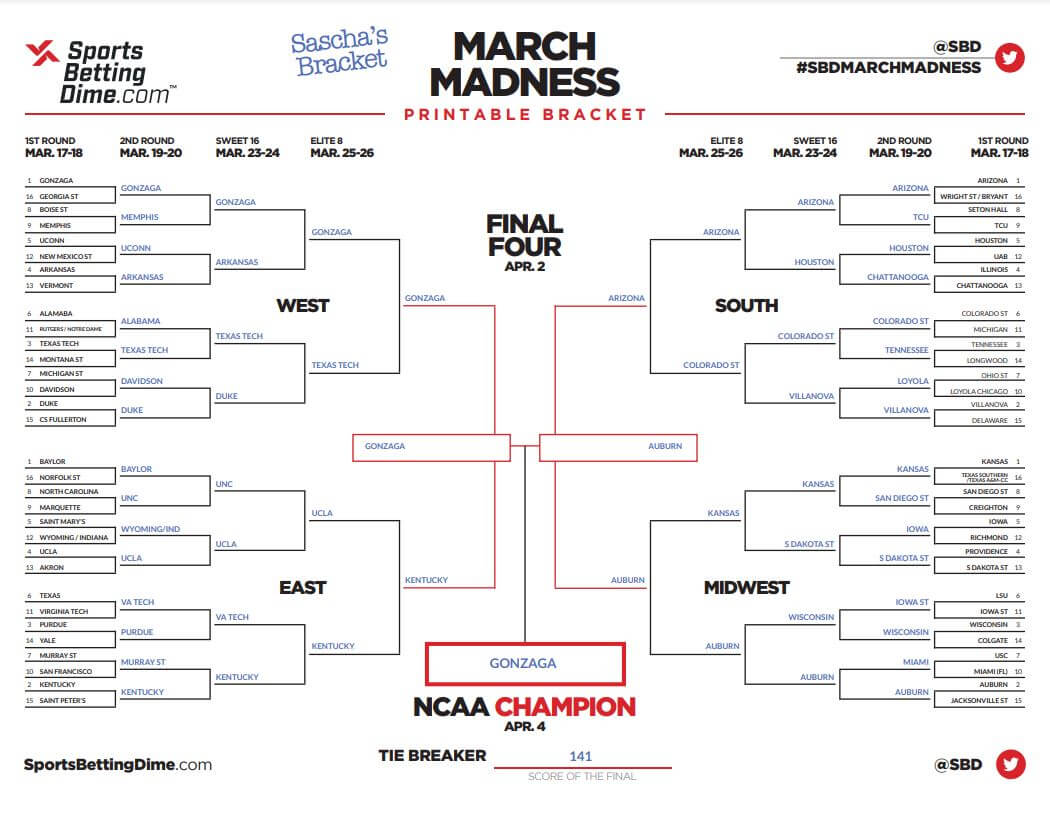 This is just lather/rinse/repeat for me. Gonzaga is the best team by all metrics. They have excellent guard play. They have the requisite senior leadership. They have a coach who’s been here before. If you’re looking at how to pick March Madness winners, no other team in the field ticks half as many boxes as the 2022 Zags.

I don’t see much value in betting them at +300 in the odds to win March Madness, but right now I’m looking to rack up points in a bracket contest. Those are different equations.

Full disclosure: I’ve been a die-hard Gonzaga fan since Richie Frahm and Matt Santangelo made their Elite Eight run in 1999. The potential for bias exists.

I like this Mocs team a lot. Six-four Point guard Malachi Smith (20.1 PPG, 6.7 RPG, 41.5 3P%) is going to be a nightmare matchup for Illinois smaller guards. And maybe more importantly, Chattanooga has a legit big who can make life difficult for Kofi Cockburn. Kansas transfer/persona non grata Silvio De Sousa (11.1 PPG, 7.0 RPG) has NBA-level talent and has been a great complement to Smith and two-guard David Jean-Baptiste.

Illinois is limping into the tournament a little. They are 4-4 in their last eight, but this is more a bet on Chattanooga than against Illinois.