After a thrilling AFC Championship that saw the New England Patriots erase a ten-point deficit in the fourth quarter, the NFC Championship was far less entertaining (to the objective fan), as the Philadelphia Eagles had the game locked up midway through the third quarter.

“As a result, we’ll see a rematch of Super Bowl XXXIX: a 24-21 Patriots victory over the Eagles.”

Before we get lost in analyzing Super Bowl 52, let’s have a look back at how the two team’s odds to win Super Bowl 52 have changed throughout the course of the season. And of course, we’ll offer a little bit of betting insight on the big game. 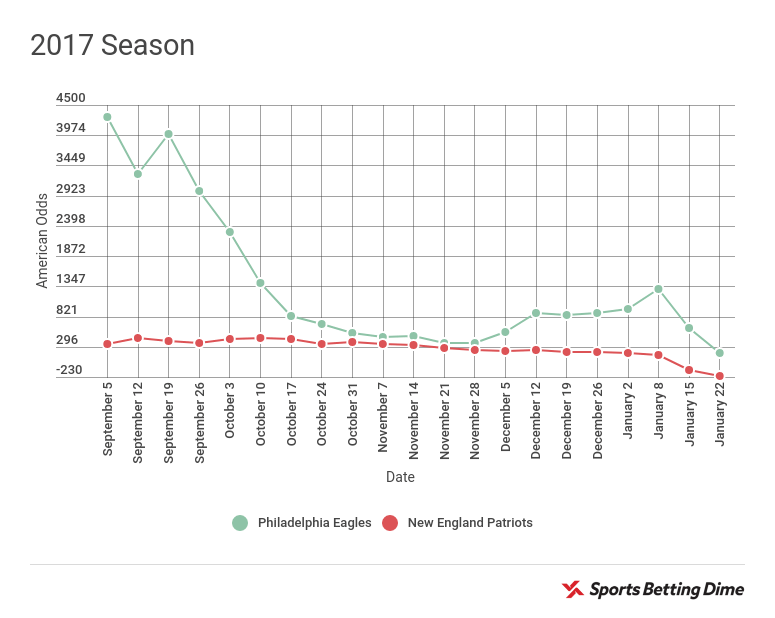 All season long, the New England Patriots possessed the shortest average odds to win Super Bowl 52. The Philadelphia Eagles came close to stealing that honor in November, but then disaster struck when MVP front-runner Carson Wentz tore his ACL. The Eagles weren’t given much of a chance with Nick Foles leading the way, even after securing the top seed in the NFC. 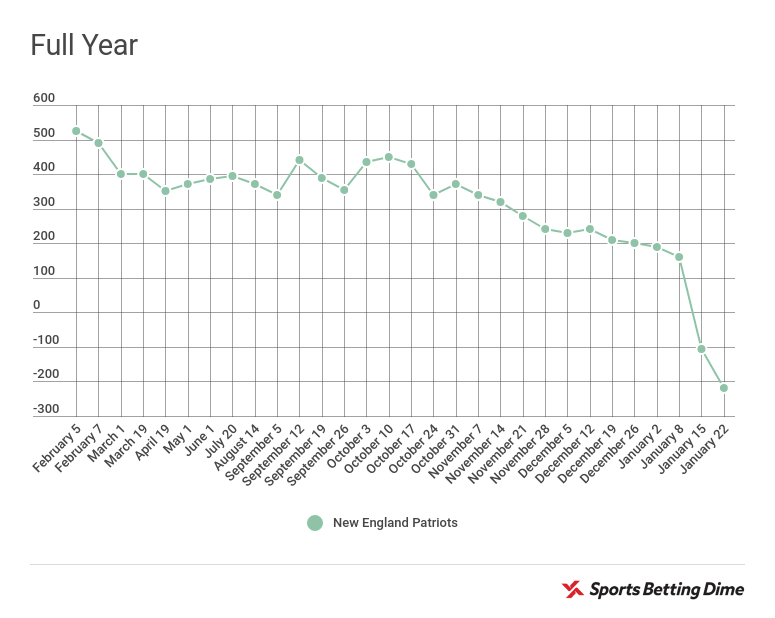 In spite of how bad they looked, no sportsbook was ready to write off the defending Super Bowl champions.

Thanks to some vintage Tom Brady performances, the Patriots would overcome most of their early-season defensive struggles, escaping the first four weeks 2-2 in while allowing 32 points per game. Throughout the month of October, Bill Belichick and Matt Patricia would sort out the defense, not allowing their linebackers to be exposed in coverage as much. In those four games, New England would only allow an average of 12.8 points per game.

Since October 31, the Patriots’ average odds to win Super Bowl 52 have steadily gotten shorter each week, with one minor hiccup coming after a Week 14 upset in Miami. Their average odds went from +230 to +240 after the 27-20 loss on Monday Night Football.

Entering the playoffs, there was very little value on betting New England to win Super Bowl 52. Their average odds were +190 ahead of Wild Card Weekend, and dropped to -105 after their 35-14 victory over the Titans in the Divisional Round. Jacksonville’s upset over Pittsburgh also likely played a role in the rather short odds heading into the AFC Championship. 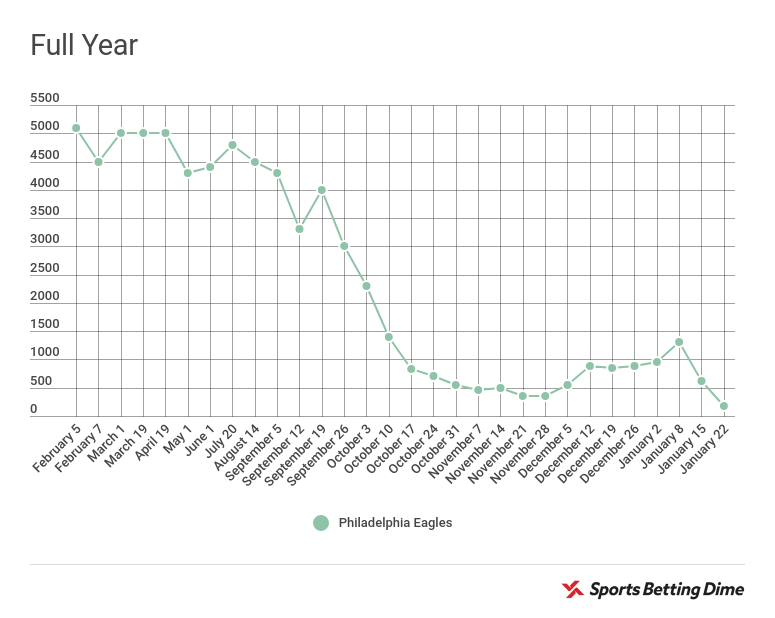 Philadelphia’s average odds to win Super Bowl 52 would continue getting shorter over the next handful of weeks until a minor jump from +360 to +550 following a 24-10 defeat in Seattle on Sunday Night Football. That would be followed by a more dramatic movement the next week, when it was announced that Carson Wentz had tore his ACL in a victory over the Rams. The Eagles saw their +550 average odds spike to +890: the longest they had been since October 17.

Wentz’s replacement, Nick Foles, would win two of Philadelphia’s final three games, locking up the top seed in the NFC, but he did not make a believer out of any sportsbooks. Philadelphia entered the playoffs with longer average odds than the Vikings (+410), equal odds to the Saints (+950), and only slightly shorter than the Rams (+980). When it was discovered that the defending NFC Champion Atlanta Falcons would be the Eagles’ opponent in the Divisional Round, Philadelphia’s average odds went from +950 all the way to +1300, the third-longest of the eight teams remaining.

Even after beating the Falcons, the Eagles were given very little chance of beating the Vikings in the NFC Championship. Minnesota’s average odds to win Super Bowl 52 were +180, compared to Philadelphia’s +620. Ahead of the big game, Doug Pederson’s group is maintaining their status as underdogs, possessing +180 odds to win the franchise’s first ever Lombardi Trophy.

As has been the case basically all season, there is little value in betting the New England Patriots to win Super Bowl 52. But a winning bet that nets little return is still better than a losing bet with potential for a big payout.

In order for the Eagles to continue shocking the football world and take down the Patriots, they’ll need a few things: (1) Nick Foles must be every bit as good as he was in the NFC Championship, (2) both their offensive and defensive lines need to continue dominating, and (3) Patrick Robinson will need to continue shutting down slot receivers.

If all of those come true, the Eagles could make this a very entertaining Super Bowl. But if one of them slips up, Philadelphia will be exposed by the defending Super Bowl champions. Not only do Tom Brady and the offense look as dominant as ever, but the Patriot defense has allowed an average of 14.4 points in their last 14 games. The Pats will be able to apply more pressure on Nick Foles than Minnesota did, and it’s difficult to imagine a Brady-led offense turning the ball over three times.

I know the return isn’t sexy, but my money is going on the Patriots in Super Bowl 52. You can currently get New England at -200.

If you’re looking to bet the Eagles in Super Bowl 52, you can get them at +180 if you shop around.