Heisman Trophy Betting: How to Make the Right Pick 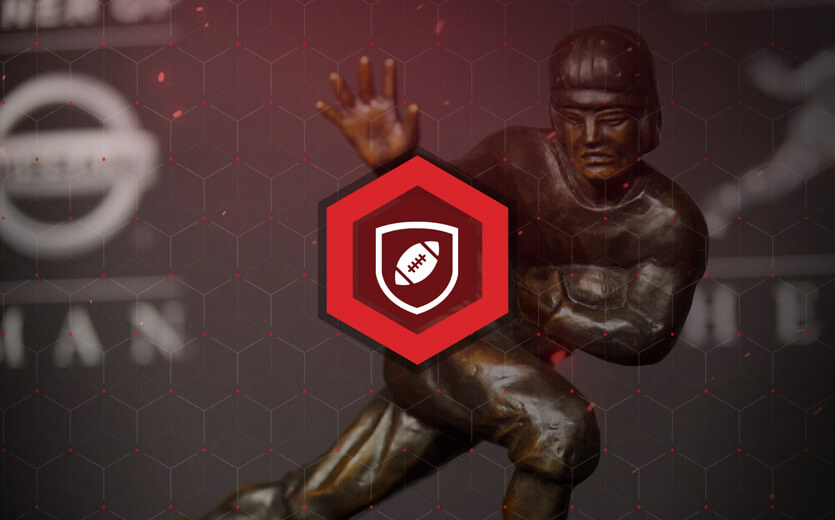 There are plenty of standout candidates for the Heisman Trophy every year, and this season is certainly no exception. Last year, wide receiver DeVonta Smith represented the Crimson Tide as the Heisman Trophy winner and joined the impressive ranks of recent winners like Joe Burrow, Kyler Murray, and Baker Mayfield.

Many fans and bettors look at NCAA football as a training ground for the NFL. Conversations about college ball often revolve around the most talented players and where they might be headed later in their careers. Few other futures bets are colored by so much commentary and speculation.

With so much intrigue surrounding the game’s top talent, it’s no surprise that fans and pundits fixate on the Heisman Trophy winner. But bettors should be cautious when approaching this popular futures bet. It’s easy to get burned with so much uncertainty in the college football season and Heisman selection process.

Betting On the Heisman Trophy: The Basics

Wagering on the winner of the Heisman Trophy is a classic futures bet. Any college football betting site worth their salt will offer lines on this proposition, and there’s opportunity to make some serious coin if you can predict the winner accurately.

Most sportsbooks release their odds for next season’s Heisman winner at the end of the previous season. If your team didn’t make a bowl game or the NFL is just a tad flashy for your taste, you’ll be glad to hear that you can begin evaluating the odds for next year in early December.

Like most futures bets, you’re going to encounter long odds for Heisman Trophy betting. Even the best players in the game offer positive money (you’ll win more than you risk), which speaks to the difficulty of accurately predicting the winner. On the flip side, you stand to make an incredible profit if you take a less favored player or get your money down early.

You can expect to see favorites open in the range of +200 to +300, and it’s not unheard of to find top 5 players listed as high as +15,000. Of course, it’s the potential for massive profit that draws so many fans to futures bets in the first place.

The Best Time To Bet on Heisman Trophy Candidates 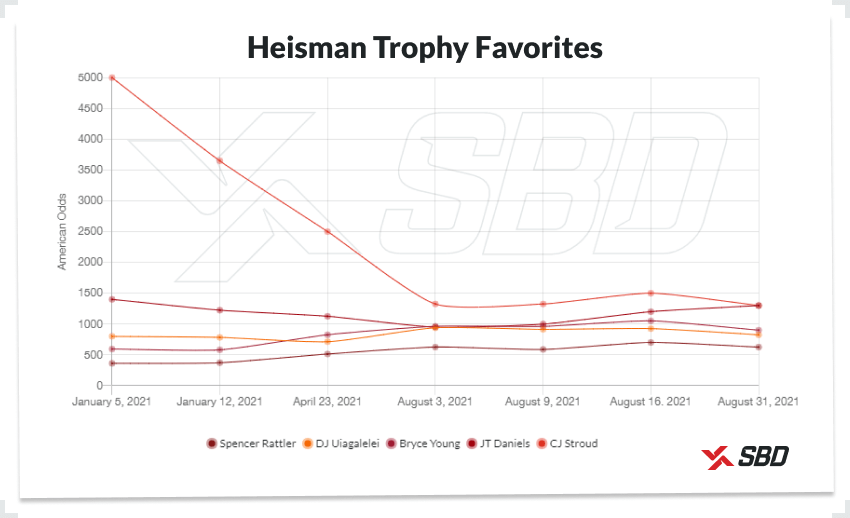 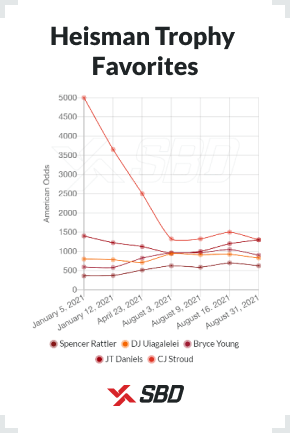 Besides evaluating the players themselves, timing is an important strategic consideration when betting on the Heisman Trophy. Bettors often wonder if it makes more sense to put down money early and capitalize on hugely favorable odds or wait until the picture is bit clearer later in the college football season.

Naturally, there are advantages and disadvantages to both approaches. If you are confident in your pick and are unlikely to be swayed, it’s best to put down your money early. If you prefer to take a more cautious approach to your wagers, and do not have a personal investment in any of the primary contenders, we would strongly advise waiting until later in the season.

Here are a couple things to keep in mind regarding timing:

The odds will fluctuate throughout the year. We advise keeping an eye on them throughout the season and pouncing once you see value. The tips below will help you identify the players to focus on, and our Heisman Odds Tracker will keep you up-to-date on the line movement throughout the college football season.

How to Pick a Heisman Trophy Winner

We’ve established the fact that it is quite difficult to accurately predict the winner of the Heisman Trophy. That said, many bettors are successful every year. So, what do they know that most of the public fails to pick up on?

Focus on QBs and Running Backs

Since 1950, there have been just four Heisman winners that played a position other than quarterback or running back. Thirty-two of the winners over that time period have been QBs, while 33 have been running backs (we include half and full backs in these figures). Eight out of the last ten winners have played quarterback.

We wouldn’t suggest outright ignoring players at other positions when it comes time to pick a Heisman Trophy winner though. DeVonta Smith flipped the script last season as the first wide receiver to win the Heisman Trophy since Michigan’s Desmond Howard in 1991. The three runner-ups, however, were all quarterbacks: Clemson’s Trevor Lawrence, Alabama’s Mac Jones, and Florida’s Kyle Trask. 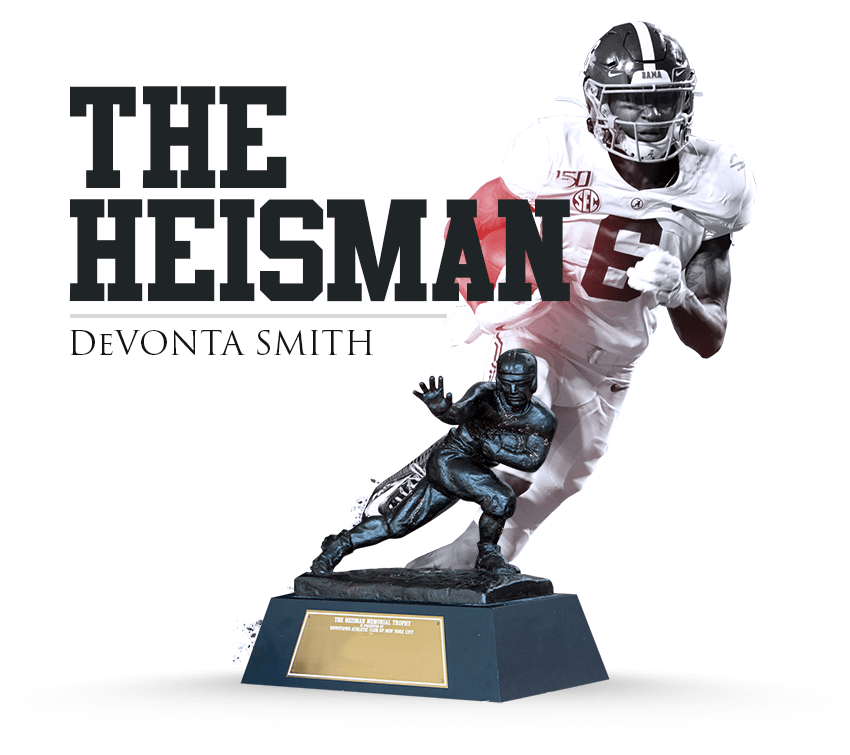 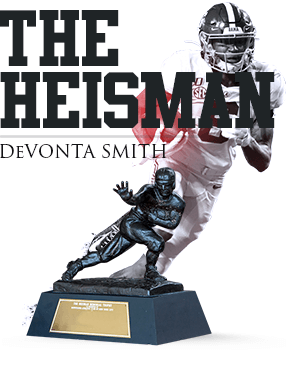 That said, non-quarterback winners are still relatively far and few. The game’s top quarterbacks generally have the best odds of earning a Heisman Trophy. Once-in-a-generation running backs are also worth a hard look, but the trend seems to be moving strongly in favor of QBs.

Pay Attention to the Team They Play On

The Heisman Trophy is an individual award, kind of. It’s no surprise that exceptional players tend to gravitate towards the strongest programs and put the team on their back, if you will. That said, you absolutely need to consider the quality of the team each Heisman contender plays for.

Heisman Trophy winners are selected through a vote consisting of 870 sports journalists and previous winners. These electors have always weighted team performance nearly as heavily as individual performance.

Focus on players from teams that are in contention for the national championship. At a minimum, they should be highly competitive choices to be champions of their conference. Even if you think they are the most talented player to ever grace the earth, do not wager on a Heisman contender who’s unlikely to appear in a major bowl game or the College Football Playoff.

Do Age and Experience Matter?

Age and experience are the final factors you’ll want to weigh when handicapping your Heisman Trophy picks. Since 1950, 45 of the winners were seniors, which is clearly an overwhelming majority. Glancing at this stat, it’s easy to assume that picking seniors is the safest bet when it comes to selecting a Heisman winner. But a more detailed look at the data reveals some nuances you want to take note of.

The tendency to select seniors has dissipated significantly in recent years, as one sophomores, four juniors, and even two freshmen have taken home the trophy in the last ten years. Johnny Manziel was famously the first freshman to win the award back in 2012, with Jameis Winston following in his footsteps the following year.

It’s too early to say with certainty that older players are no longer more likely to take the award. Age and experience are often part of the discussion among pundits and fans speculating on the Heisman winner, but we suggest weighing this factor less heavily due to recent history.

Ultimately, a player’s talent gets them in the running for the Heisman, not the year they were born.

Is There Value Betting on Heisman Futures?

Sharp bettors tend to stay away from futures bets for a reason. If your primary motivation to bet on sports is making money, there are lots of other lines that offer far more value.

The early odds are certainly tempting with the potential to triple, quadruple, or even septuple your wager. But take a second to remember that the bookmakers weren’t born yesterday, and these long odds reflect the reality that wagering on the Heisman mid-season is more or less a toss-up.

That said, futures bets are popular because they are fun. They are fun to handicap, and they are fun to talk about. If you’ve set aside a bit of your bankroll for entertainment value, it’s hard to find a better option than betting on the Heisman Trophy winner.

There one exception to these words of caution, but it requires careful attention to detail and a solid understanding of sports betting strategy. If you enter the Heisman futures game early, picking a longshot can provide an excellent opportunity to secure a profit by hedging against your initial pick later on. Take a close read of our guide to hedging sports bets for a more detailed explanation of this strategy.

Whether you decide to try your luck at Heisman Trophy betting or not, please exercise responsibility when betting. Even the sharpest strategies in the game are worthless without careful bankroll management and a commitment to responsible behavior.