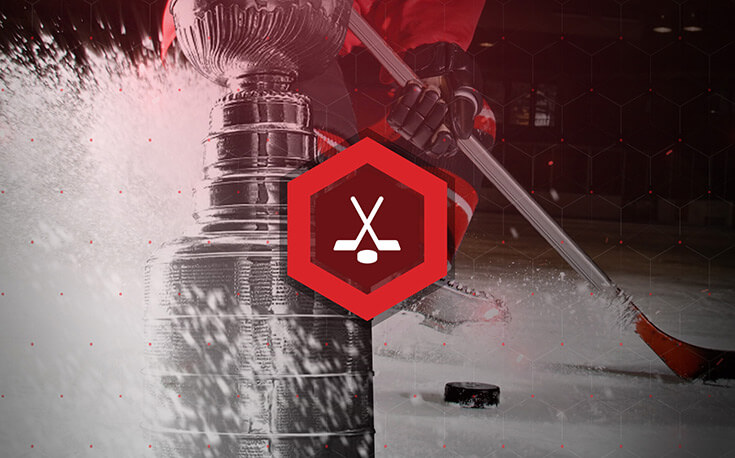 Betting on the NHL playoffs is the most popular form of online NHL betting, and its an exciting way to add some extra entertainment to your playoff viewing experience. It’s also extremely popular amongst expert sports bettors, or “sharps.”

Many seasoned sports handicappers firmly believe that the NHL is the most accessible sport to make money on, as tracking individual players and teams closely can give you a tremendous edge over the competition, especially in the playoffs. Further, its common belief that the NHL offers the best lines, as sportsbook’s oddsmakers often spend the majority of their time creating lines for the more popular North American Leagues, like the NBA, NFL, and MLB.

In this guide, we take you through the major strategies and illustrate some of the major influencing factors that you should be monitoring before finding a reliable NHL betting site to place your first wagers on the NHL playoffs.

Any discussion of playoff betting strategy has to involve the Zig-Zag Theory. In essence, the Zig-Zag Theory advocates betting on the team that just lost a game, as they are likely to rebound and win the following game, despite odds being lopsided in favor of the bettor. The theory is based on the idea that past results influence most “squares,”  who quickly lose sight of the bigger picture and wider context of the playoffs after seeing a team lose just one game.

According to the theory, momentum is a dominant factor to consider in NHL playoff betting. The fear of elimination motivates teams, and they will often improve their performance to make up for a loss.

The Zig-Zag theory advocates betting on the team that lost the previous game – the odds will be stacked against them, but fear of elimination can motivate teams to strong performances following a loss in the playoffs.

The theory applies to NHL playoff betting thanks to the 2-2-1-1 structure of post-season hockey. In the NHL, home ice does not equip a team with that significant of an advantage, especially in comparison to a league like the NBA. Should the home team win Game 1, the lower seeded underdog team will win Game 2 over 33% of the time.

Should the favorite and home team win Game 1, the majority of bets will go towards them sweeping the first two games at home.  This gives those betting on the underdog great odds most of the time, especially on an outcome that occurs roughly one out of every three times.

All of this being said, we don’t recommend putting too stock in the Zig-Zag theory on its own; it’s not a catch-all for how to be a successful betting the Stanley Cup or other NHL playoff series. It must be put in proper context with a whole host of other factors.

Zig-Zag Theory and Its Caveats

To be successful betting on the NHL playoffs, you need to watch the games and draw your own inferences and conclusions about teams and players. Acquainting yourself with each coaches’ strategy and the injury list will also benefit you immeasurably.

Every game and series is of a different character; tangible and intangible factors will inevitably figure into every outcome, as will luck. When you’re watching the game, or following a series in the hockey media, here are some factors you should be watching for, and placing them in context with the Zig-Zag Theory.

The Zig Zag theory should only be applied to teams that are relatively closely matched. If two relatively strong teams are facing off, swings in momentum are more likely to make the difference. If it’s a first-round match up between the league’s top team and a squad that struggled their way into the post-season, on the other hand, the dominant team is likely to come out on top regardless of the underdog’s intense motivation.

Always remember to focus on the quality of the match up itself, and how teams are actually playing, before you considering applying handicap methods.

The Caveat to the Match Up: The Sweep

More often than not, teams win when trying to avoid being swept. Since 2005, teams down 0-3 have won Game 4 55.5% of the time (25-20). Teams that lost the first three games of a series and play Game 4 at home have gone 16-12 (57.1%) while road teams in the same positions have gone 10-7 (58.8%) straight-up. More often than not, the team posed to sweep will be favored by your sportsbook. Don’t underestimate what a desperate hockey team can accomplish! Keep this in mind when looking at odds for Game 4; it could give you the edge you need over your sportsbooks.

Sometimes, coaches simply figure the other team out, exploiting their weaknesses with a highly-specific game plan. Considering the relatively high number of games in a best of seven NHL playoff series, teams can get a chance to get to know each other.

There are countless examples of this: the deployment of the infamous Moen-Pahlsson-Niedermayer line in 2007 by Randy Carlyle, killing the opposition’s dominant top lines, Bob Hartley embarrassing Willie Desjardin’s reliance on his Luca Sbisa-Kevin Bieksa defense pairing in the 2015 playoffs, amongst countless others.

Handicapping methods like the Zig-Zag Theory should no longer be applied when one team has a major advantage in terms of coaching.

Coaching factors heavily into playoff matchups, as coaches have much more time to adjust their opponent. Their analysis often has significantly more depth than in the regular season, along with obvious increased importance.

Whether a team plays a slow or fast game, how active their defense is, whether the goalie plays the puck – these little details are of great consequence in a seven game series, and understanding them gives you a huge edge in predicting the winner of a series. Countless series are fought just as much on the benches as they are on the ice.

In cases where one side looks utterly neutered and ineffective thanks to superior coaching, handicapping methods like the “Zig-Zag Theory” should no longer be applied. Focus on which coach is an excellent analyst and strategist in comparison to his peer across the bench.

Goaltending is the most important position in the NHL. No doubt, every team’s chances live and die on the backs of their goaltenders.

Though it has been the topic of some debate, we argue that goaltenders are much better than they ever have been historically. The bottom line is that a team must trust their goalie completely to have any chance of success in the Stanley Cup Playoffs.

Watch goaltending match ups closely to gain a huge edge when betting on the NHL playoffs: a hot goaltender always has the potential to derail a heavy favorite.

A great example of this is the legendary Pittsburgh-Philadelphia series of 2012, which featured a whopping total of 56 goals in 6 games, for an average of 9.3 goals a game. Neither goalie could stop a beach ball, but ultimately Philadelphia triumphed on the strength of Ilya Bryzgalov’s slightly less pungent goaltending. However, the underdog New Jersey Devils with a dearth of talent quickly dispatched Philadephia in the next round; they were able to exploit the glaring deficiency in the Philadelphia net. No doubt a deeper, more talented squad, Philadephia’s loss is an excellent reminder that you need at least average goaltending to win in the NHL.

Watch goaltending match ups closely to gain a huge edge when betting on the NHL playoffs: a hot goaltender always has the potential to derail a heavy favorite.

Tracking a team’s injuries throughout  the playoffs is undoubtedly the most important factor in predicting their success. If a team has lost three out of their top four centers, or three of their top four defensemen, their chances of winning are greatly reduced.

Players from lower in the lineup or the farm are going to be very hard pressed to replace injured regulars. The margins are so close in the NHL that any team plagued by the injury bug will doubtless suffer a drop in performance; the old aphorism “good teams play through it” is simply not relevant or even true when it comes to betting on the Stanley Cup Playoffs.

Look back at recent Stanley Cup Champions, and you’ll find that they all had the majority of their core players playing.

Tracking a team’s injuries throughout the playoffs is undoubtedly the single most important factor in predicting their success.

The best example of injuries derailing a heavy favorite is likely the 2006 Conference Finals. The Carolina Hurricanes were very fortunate to face a Buffalo team missing its top four defenders due to injury. Buffalo put up quite the fight, but ultimately could not overcome such a monumental obstacle. Considering they were defeated in seven games, it’s quite clear that a healthy Buffalo team would have made short work of Carolina.

In the Stanley Cup Finals, Carolina faced an Edmonton squad that defied all expectations to make the finals, buoyed by the otherworldly goaltending of Dwayne Roloson. In Game 1, the Oiler’s Marc Andre Bergeron cross-checked Carolina’s Andrew Ladd onto Roloson’s knee, knocking him out for the series. Carolina won Game 1 in the dying seconds on an epic misplay by Edmonton’s backup, Ty Conklin, and went on the win the Stanley Cup. With Edmonton’s main strength neutralized by a freak injury in Game 1, Carolina had a much easier path to their championship. Injuries really do matter!

Before you bet on an NHL series, take a look at the injury reserve of each team. Injured teams lose more often than not. Grand narratives of a team’s perseverance in the face of injury devastation often turn out to be false.

The team that dictates play throughout a series tends to come away ahead. Metrics like Corsi, Quality of Chances, PDO and Shot Totals can be reliable indicators of which team is doing so. If you need an introduction to NHL advanced statistics, check out this helpful guide. You can track advanced statistics, both for individuals and teams, at Hockey Reference. This site is excellent for getting insights into specific games and series as well, presenting statistics, news, and succinct injury updates.

If you see a team that’s losing games, but dominating possession metrics, it could be a sign that they will soon start to win some games. A sportsbook is highly unlikely to reflect these considerations, so this is a great way to get an edge in your NHL bets.

Sometimes, one player can make all the difference. Everyone remembers Fernando Pisani’s 14 goals in Edmonton’s 2006 run: he was a career grinder who impacted every single series he was a part of. JP Pageau was 5th in goals in the 2017 playoffs. Bryan Bickell was a decent player who became a hero in many of Chicago’s playoff runs.

Each of these skaters had a significant impact on their team’s chances; the more you watch the games and follow the storylines surrounding them, the more you can factor in performance of the unsung heroes. Some players simply rise to the occasion.

Ready to Start Betting on the Stanley Cup Playoffs?

If you’ve consumed all the info packed into this guide, you already know more about betting on the NHL playoffs than the vast majority of the public. You can get even more helpful info and tips from the hockey articles in our how to bet on sports section.

If you want to stay up-to-date on the latest odds going into the playoffs, check out our trackers for the following:

Enjoy the action this NHL season, and always remember to wager responsibly.