How Does Weather Impact Performance? [Study]

Success is a complicated phenomenon. In the context of life, it’s subjective, but in the world of sports, wins and losses are the key differentiators between good teams and bad teams. Practice and talent are among the many variables that seem to have historically influenced performance outcomes. But how about factors that are beyond a team’s control? Let’s look at climate, for instance: The NFL community seems to ceaselessly concern itself with game-time weather, and for good reason.

Who Comes Out on Top?

For the most part, no strong associations were observed on a climate level, however, there were some notable performance differences within individual teams in the different climates. 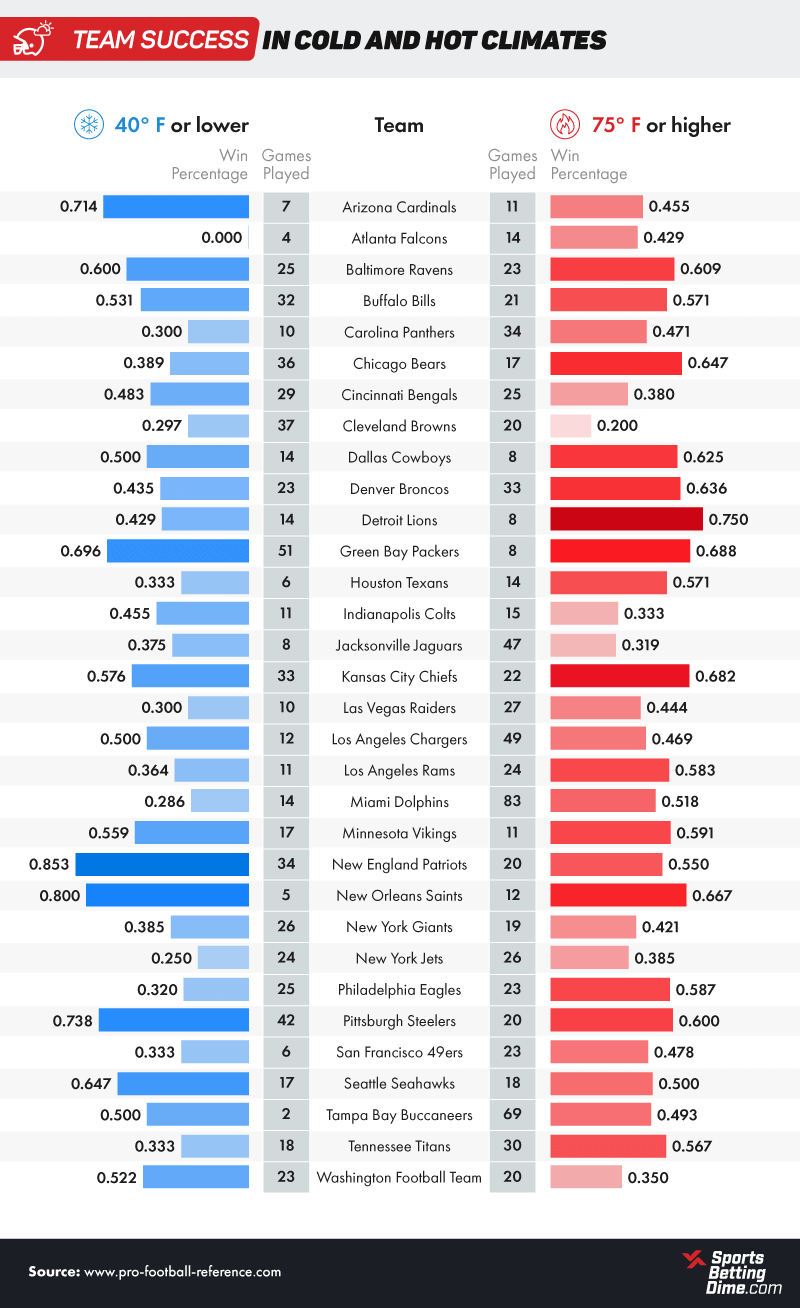 Now, when taking a closer look at these findings, it’s possible you might find yourself asking how influential weather is in the grand scheme of things? Aren’t there so many more important variables I should factor into my bet? These are valid questions, especially when considering the rather complex case of the New England Patriots. More specifically, when taking into account the New England Patriots’ star-studded roster these past 11 years, it seems doubtful that their overwhelming success is tied so closely to climate conditions. However, another dimension to consider – aside from the fact their home games and practices take place in relatively colder climates – is their team morale. It seems Patriots coach Bill Belichick instills an acute discipline in the team, having adamantly asserted that the weather is of no consequence to the team mentality and resulting performance. According to Fox Sports, Coach Belichick had this to say in response to concerns of inclement weather before a game in October 2014: “If you start game-planning for what the weather is going to be and you’re wrong, you’ve wasted a lot of time.” So, before basing a bet off weather alone, at least in the case of team successes, it’s important to understand how it factors into team performance on a case-by-case basis.

For obvious reasons, it’s important to consider games that have been played in domed and outdoor stadiums. Adding and assessing this dimension to your calculation provides a greater understanding of how the inconsistencies of climate shape game outcomes. It’s true that the four indoor stadiums in the league certainly comprise a small minority of the 32 total stadiums. However, it’s worth evaluating how team performance stats are distributed across the league in both controlled and shifting climate conditions. 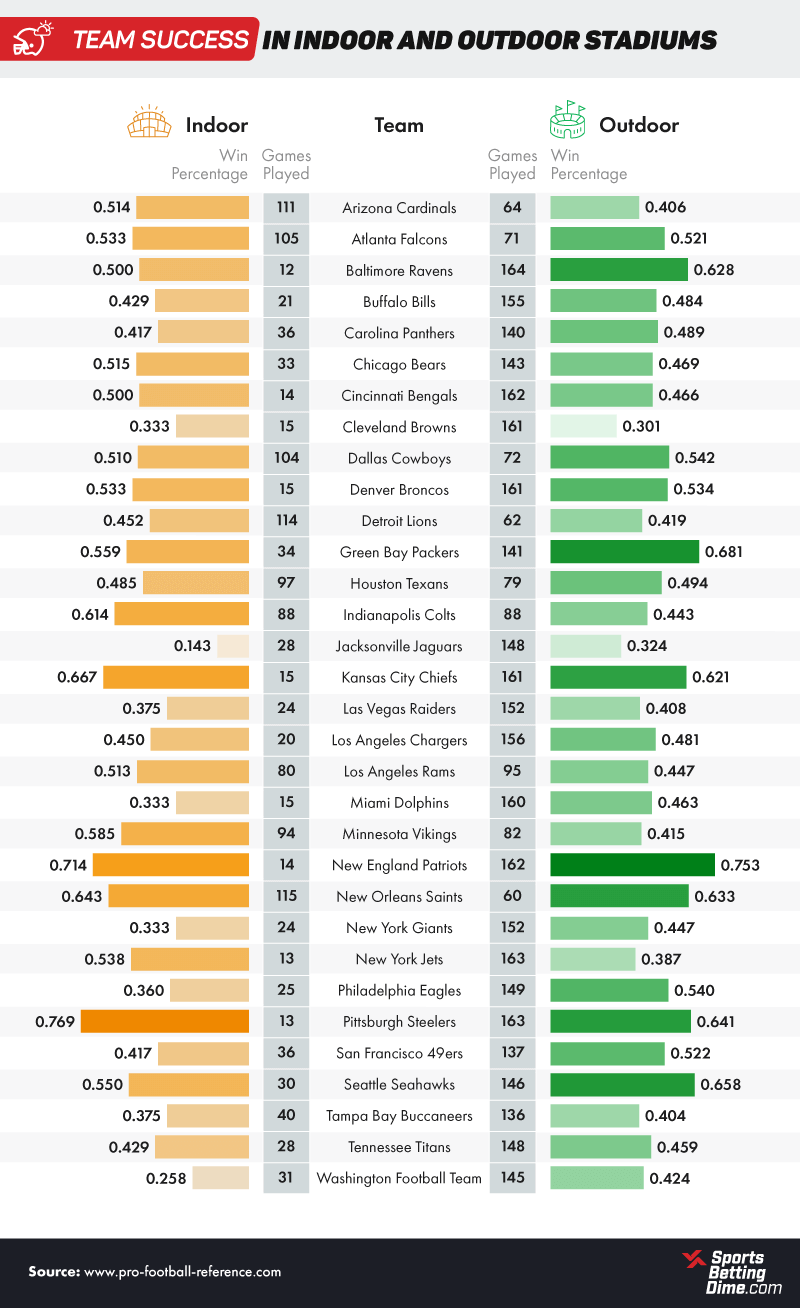 When exposed to the elements, our good friends the Patriots and Browns return for a second debut on opposite ends of the stats sheet. The Patriots accumulated an outdoor game win percentage of 75.3%, while the Browns ended the decade with a mere 30.1%. It stands to reason, then, that a bet against the Browns is likely to give you a hefty return on investment.

Clearly, team win percentages only offer a glimpse of the relationship between weather and football. In acknowledgment of the numerous variables that influence performance outcomes, let’s take a look at how climate conditions relate to more particular statistics. By analyzing the impact of weather on offensive firepower, it’s possible to gain a more nuanced understanding of how climate factors into individual games. Thus, it would be crucial to evaluate a team’s average points, rushing yards, and passing yards per game while accounting for climate conditions. 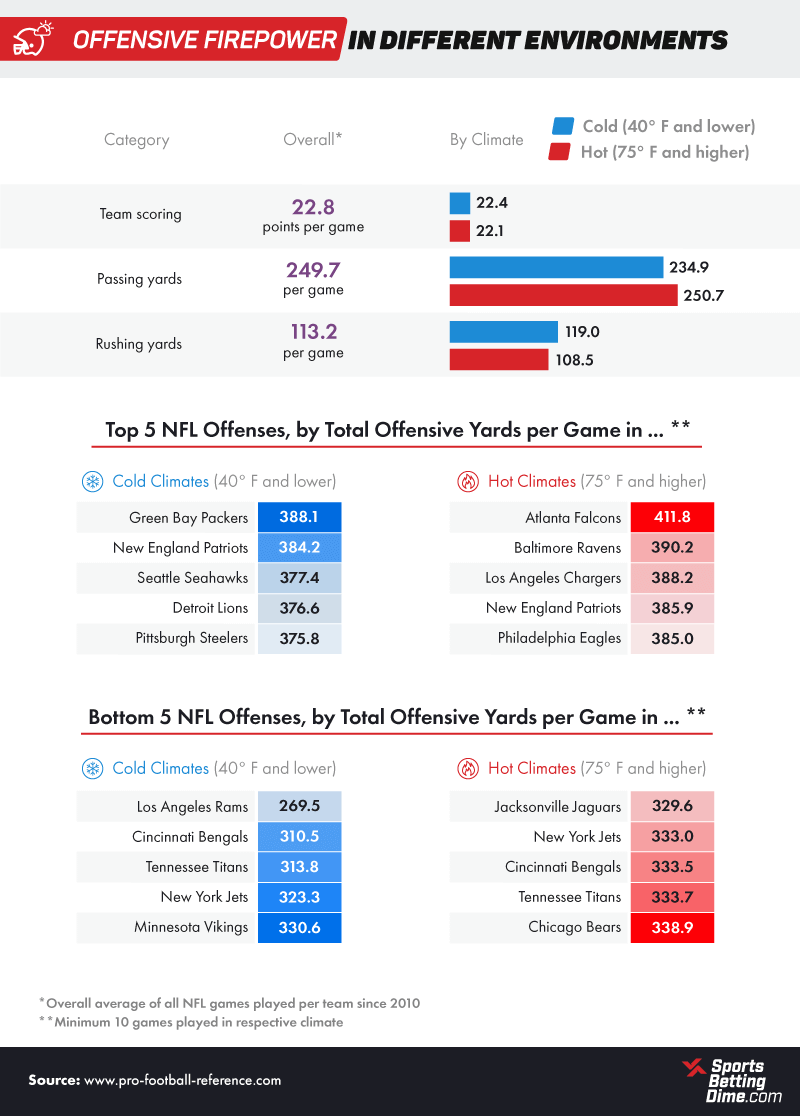 Seeing as we’ve discussed the performance of NFL offenses at the team level, it only makes sense to unpack these numbers and assess how individual performances have contributed to the ‘total offensive yards’ figures we saw above. Essentially, it’s important to understand how a respective team’s quarterback made that magic – or lack thereof – happen. 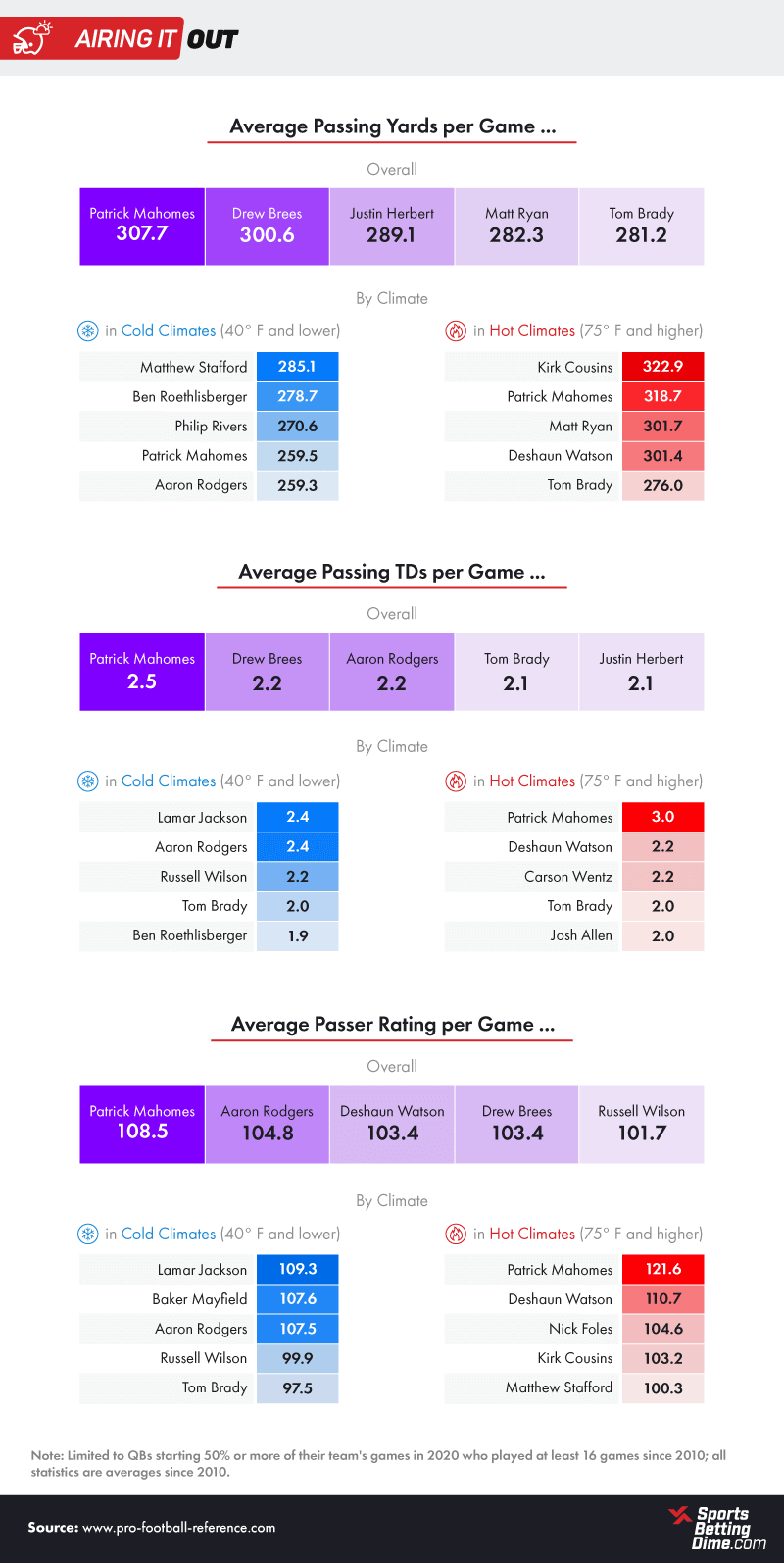 Patrick Mahomes’ contributions since 2017, for instance, granted the Kansas City Chiefs the most average passing yards per game overall. When factoring in the climate, we have to look at Kirk Cousins’ accumulative contributions to the Washington Football Team and Minnesota Vikings, where he averaged 322.9 points per game in hot climates. Matthew Stafford’s league-leading cold-climate average was 285.1 during his time with the Detroit Lions and Los Angeles Rams. While the Atlanta Falcons may have an overpowering offense, they sadly can’t say the same for their defense. The Falcons allowed the most average points per game in both cold- and hot-climate games since 2010. In cold-climate games, Atlanta allowed an average of 31.8 points per game, and in hot-climate games, they allowed 26.2. The case of the Falcons is particularly revealing vis-a-vis assessing whether to bet on a specific game outcome. When betting on a Falcons win, for example, you have to consider that while their offensive firepower has a proven record of success, their defensive talent is conversely lackluster. This sort of inconsistency, then, may make it difficult to accurately assess the likelihood of a game’s outcome.

Final Thoughts on the Impact of Climate on NFL Games

Generally speaking, the relationship between climate conditions and performance outcomes certainly exists, but it becomes more complicated when attempting to assess the strength of their correlation. However, even when accounting for confounding variables, the data clearly demonstrated some conclusions worth noting. If there’s anything you should take from this article, it’s the following:

It’s clear that numbers talk in many betting scenarios; however, reality may sometimes contradict theoretically expected outcomes. So, it’s ultimately up to you to decide what outcome you’ll invest in. SportsBettingDime.com puts you in the driver’s seat and gives you the information you need. All you need to bring to the table is your intuition. For close to a decade, SBD has connected people with first-rate online sports betting sites. Whatever tools you need to come out on top of the bet, SportsBettingDime.com is here to support you.

We collected NFL game data from www.sports-reference.com for all regular-season games played since Week 1 in 2010. Along with the final score and box score statistics, we also collected information regarding the stadium type (indoor or outdoor) and the recorded temperature on game day (available and impacting outdoor games only).

No statistical testing was performed, so the claims listed above are based on means alone. As such, this content is exploratory and is presented for informational purposes only.

Given the open-endedness of climate’s relationship to sports, it’s certainly to your advantage to further this discussion. If you find our data useful, feel free to spread the knowledge. Just make sure you do so for non-commercial use and provide a link back to our site.